Costa Rican's are Intelligent, loving people. They rejected a homphobic Evangelical singer Preacher for a young writer, center -left. An educated young man. Costa Rica faced going back decades to going forward. They decided that religion and politics does not mix. History and the present show us that when people forget that on elections, they will pay. Only when prosperous nations have abandoned the ties between two separate forces which usually go on different directions, have they seen a better life.

Politics is supposed to give the people what they need,  from protection, health, to an economy with jobs for today and next month, next year hopefuly until retirenment.

Religion is based either on the past or a future which no one knows when it will come and it is based on destruction first. Many religious people tend to worry more about what happens to them when they die than what good for others and this earth they can do to improve our lives. A religious sister of mine said she was "voting for Trump so the world will already burn and Jesus will come again." Sounds familiar? It's been said in many ways if not those words. If everyone thought like that, already the dinosurs would be roaming the earth again.
🦊Adam Gonzalez

It is adamfoxie's 10th🦊Anniversay. 10 years witnessing the world and bringing you a pieace whcih is ussually not getting its due coverage. 4.9 Million Reads
Over 5Million Reads Adam Gonzalez at April 07, 2018 No comments: Links to this post

Over 5Million Reads Adam Gonzalez at January 24, 2018 No comments: Links to this post

A same-sex couple from Costa Rica were granted a common-law marriage Tuesday, making them the first legally-recognized gay couple in Central America, the Tico Times reported. A judge at the city’s Family Court granted partners Gerald Castro and Cristian Zamora a common-law marriage based on an amendment to the Youth Code in July 2013 that mandated common-law marriages should exist regardless of gender and “without discrimination against their human dignity." 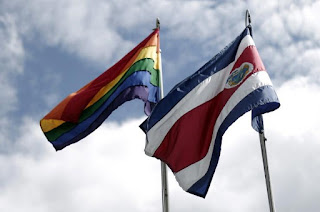 The decision, which will affect cases throughout the country, did not allow Castro and Zamora to officially marry, but instead granted them a common-law marriage, which provides the same benefits of a traditional marriage -- guaranteeing the rights to inheritance, social security, insurance and visitation rights. However, it required the approval of a judge after a couple has been together for at least three years, according to the Tico Times.
The amendment to the Youth Code drew international attention when it was first passed, with The Independent and Gawker each suggesting that Costa Rica allowed same-sex unions by mistake. José María Villalta, a member of the left-wing Frente Amplio party and the author of the amendment, said at the time that "during the discussion in the first debate, we explained that the Law of Young People [Youth Code] should be interpreted with this sense of opening to gays and no one objected," according to The Independent. Assuming there was no resistance, Villata attached the amendment to the bill.
However, it has taken two years for the results of the bill to have a tangible effect, with several other same-sex common-law marriage applications tied up in court.
"This is a big step forward," said Marco Castillo, president of Diversity Movement, the Costa Rican lesbian, gay, bisexual and transgender advocacy group. "This is the first time that the law has been recognized as such."
The interpreted clause of the Youth Code only applies to Costa Ricans between the ages of 12 and 35, so the consequences of the decision may be limited and leaves it, and any following cases, subject to possible legal challenges. The decision may also open up the possibility of adoptions by gay couples, as it could allow both partners, instead of an individual, to officially adopt a child, according to the Tico Times.
Resistance in Costa Rica to the decision and gay marriage is still strong. While a bill is currently pending in the country's Legislative Assembly to approve civil unions, evangelicals in the legislature have been working to slow down its passage.
The decision upset Jose Francisco Ulloa, the bishop of the city of Cartago, who said that he agreed that "people with this special inclination have rights like any citizen, but these are never equal to a normal, natural marriage, like we have in Costa Rica between a man and a woman," according to the Guardian.
Despite the opposition from conservative groups, supporters of LGBT rights in the nation were enthusiastic, if cautious, about the decision.
“This is an important accomplishment but it gives us a panorama of how much more we need to do,” Francisco Madrigal, political affairs director for the Center for Research and Promotion of Human Rights in Central America (CIPAC), said to the Tico Times
Eben Blake
ibtimes.com
Over 5Million Reads Adam Gonzalez at June 04, 2015 No comments: Links to this post 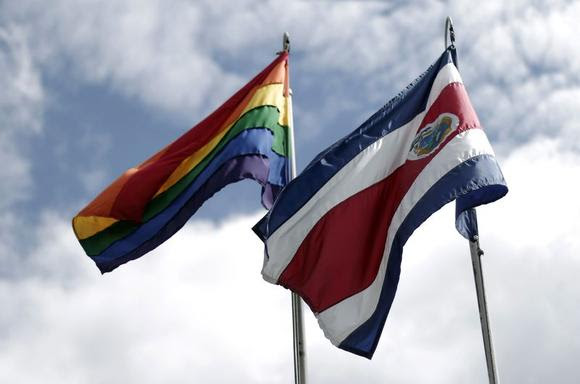 The rainbow flag, which symbolizes sexual diversity, is seen after being raised by
Costa Rica’s President Luis Guillermo Solis, next to Costa Rica's national flag at
the presidential house in San Jose May 16, 2014.
CREDIT: REUTERS/JUAN CARLOS ULATE

The Costa Rica News (TCRN) – If you pass in front of the Presidential Palace you will see a rainbow flag waving next to the Costa Rica for the first time in this building. This morning, President Luis Guillermo Solis led the ceremony in which the flag was hoisted to support sexual diversity.
The placement of the flag was made by Vice President, Ana Chacon Helana, and Diversity Movement President, Marco Castillo. He said it is a symbol and a sign of new thinking from the government.
Castillo keeps an eye on decisions by the Costa Rican Social Security regarding insurance and same-sex rights as well as the draft laws for gay marriage. He added that they are working on a project to recognize the gender and name of trans people.
The president insisted that they should take action against discrimination, particularly against homophobia. Solis said he is looking for a country of equality, so he asked the country to understand and respect diversity.
Chacón reiterated respect for diversity, a collective which has been important to her during her career. The Vice President said she will continue to work for human rights and support a new bill for securing same-sex couples rights, to be voted on this month.
The Costa Rica News (TCRN)
San Jose, Costa Rica
Over 5Million Reads Adam Gonzalez at May 17, 2014 No comments: Links to this post

The Miracle of Costa Rica. When I first heard about I figure that would be easy to rescind it plus it has to be signed by the president. Well the president is signing it and it seems like a welcome set of events
Im the posting below from an argentinian news story as they see it:

Lawmakers in Costa Rica ‘accidentally’ approved a bill that may technically legalise same sex unions in the country.
The President of Costa Rica, Laura Chinchilla signed a bill that changed a key article of the “Law of Young People,” which covers various social services for young people and laws governing marriage. Article 22, which regulates domestic partnerships, had previously specified that unions were recognised between a man and a woman.
However, José María Villalta, a leftist lawmaker from San José, changed some language in the bill to include “the right to recognition without discrimination contrary to human dignity.” Villalta is a member of the leftist Broad Front Party.
The lawmakers apparently approved the reform without reading it fully. After realizing the implications, conservative lawmakers immediately called for President Chinchilla to veto the bill.
Yet Chinchilla says she will not veto it, telling reporters “we’re going to go forward and will sign this law. We understand that the debate is over how some interpret the law and this alone is not sufficient for the executive to veto the law,” adding that the only members of government equipped to interpret the law are the judges and lawmakers.
Conservative politician, Justo Orozco, a member of the evangelical National Renovation Party, spoke out strongly against it, stating, “That preference is not a right. It’s a stunted development of sexual identity. It can change like alcoholism, tobacco addiction.”
Despite the outrage, Villalta claimed that, “During the discussion in the first debate, we explained that the Law of Young People should be interpreted with this sense of opening to gays and no one objected.”
Marco Castillo, president of the Diversity Movement, was reportedly very optimistic about the bills passage, but warns that for civil unions to survive, the bill would have to hold up in court under a constitutional challenge. Nevertheless, “It is a big step forward for gay rights in Costa Rica,” he said.
In 2011, Chinchilla said that although she is personally in favor of traditional marriage, she would not oppose gay marriage if the courts allowed it.
A poll in that same year found that 73% of Costa Ricans opposed same-sex marriage.
Argentina Independent
photos: wikipedia
Over 5Million Reads Adam Gonzalez at July 06, 2013 No comments: Links to this post