LGBTQ+ NEWS
In a post he said he has "made peace" with the situation. Gay adult film star Jessie Colter has been diagnosed with an incurable form of brain cancer, …
View on out.com
Over 5.6 Million Reads Adam Gonzalez at May 17, 2020 No comments: Links to this post

One Year After The Situation in Puerto Rico is Untenable 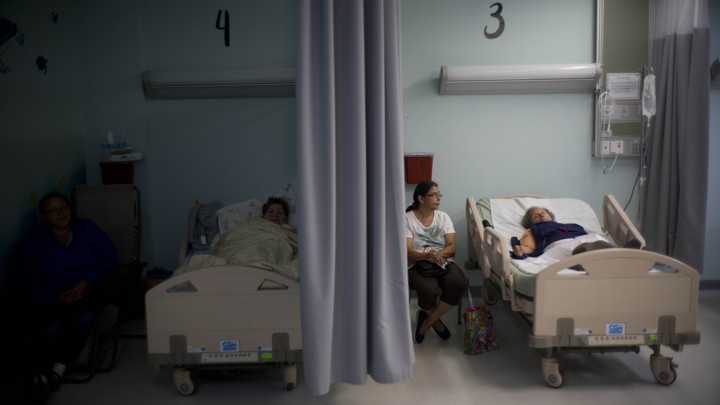 SAN JUAN, Puerto Rico—
Puerto Rico se levanta. It’s become something of an official motto among officials on the island, draped across buildings and making its way into press releases and speeches.
It captures an optimistic and hopeful feeling, one a world away from mainland America’s posture toward the island, which vacillates between indifference and sensationalism. The best English translation is probably “Puerto Rico is rising,” but a few others might do as well. Puerto Rico rises. Puerto Rico raises itself. Puerto Rico is waking up.
But a full year after the destruction of Hurricane Maria—with blue tarps as ubiquitous on the island as the se levanta slogans and the murals declaring fuerte—just what do “rising” and “waking up” really mean?
Thursday marks the tragic anniversary of one of the most deadly disasters in American history, and somber vigils and actos ecuménicos across Puerto Rico will mark it as such. The subtext of each event is the push and pull of grief and hope, a battle between past and future, a struggle between colony and colonizer, a complicated relationship between a diaspora and home, and an unresolved mix of questions about status and citizenship.
A year after Maria, Puerto Rico finally knows how many people died.

What have we learned since Hurricane Maria? Most of the attention in the past few weeks has been focused on how to quantify the damage done by the storm and its aftermath. That discussion took on a heated, partisan character when President Donald Trump disputed the estimate, rendered by academic researchers, that almost 3,000 people died as a result of the storm.

His dispute—and that of the praetorian guard of pundits dedicated to preserving his presidency—is not one rooted in facts or even in goodwill toward the Puerto Rican people, but in dismissal and negligence. The number makes the federal government look bad, so it must be a hoax, or the result of poor conditions on the island before the storm, or a poor response from Puerto Rican authorities long after.

It’s a self-contradictory argument, but one that, above all else, denies any kind of federal responsibility.

According to Trump, the federal government’s response was monumental and historical, but was somehow also hampered by the fact that Puerto Rico is a five-hour flight away from Washington, D.C.

In his telling, that response is what kept the island from enduring a fate similar to Louisiana and other states in the Gulf of Mexico after Hurricane Katrina.But the truth is that the federal government’s reaction was deeply inadequate, and likely led to hundreds or perhaps thousands of deaths.

A report released by Trump’s own Federal Emergency Management Agency even outlines some of the ways in which the response was lacking.

The report found that local stores of emergency supplies in federal warehouses in Puerto Rico were all but nonexistent, and that many of the agency’s critical staff were deployed elsewhere during the early stages of Hurricane Maria.

Federal communications were a mess, making it difficult to get a handle on the true scope of the damage or marshal resources to the worst-hit areas, and leading to logistics logjams in the provision of emergency goods.

Outside reporting from Frontline and NPR has found even more worrying deficiencies in the federal response, including a critical lack of planning, a misunderstanding of the island’s fragile electric grid, and a contracting process during the response phase that was wanting, to say the least.

There is no reading of fema’s response, official or otherwise, that indicates that it was as swift or efficient as it was after mainland disasters like Hurricane Harvey in Texas.But the responsibility for Maria’s aftermath doesn’t just rest with the federal government, either.

Puerto Rico’s vulnerable electricity grid and its weak critical infrastructure were almost entirely destroyed by the storm, and the story of how they got so weak is one that involves authorities on the island and federal lawmakers from both parties. Then there’s the financial crisis that wracked the island, and the Puerto Rico Power Authority’s financial troubles, which left the territory with a power grid that was a strong storm away from complete collapse.

The fact is that last year, Hurricanes Irma and Maria struck an island that was uniquely fragile, in political and financial turmoil, and probably in the worst shape possible for a major disaster.The ongoing question of responsibility is still being sorted out in the territory.

Multiple levels of government have been involved in Puerto Rico’s restoration, as well as its political struggle for power within the United States.

A federal oversight board, implemented by Congress two years ago and signed into law by President Obama, is technically in charge of major fiscal decisions on the island, and as such was the major player in a recent decision to privatize Prepa. But it still exists uneasily alongside the official elected government on the island, led by Governor Ricardo Rosselló, and the two have often clashed on infrastructure and finance, among other matters.

Under the direction of the oversight board, the island has embarked on an austerity program, which includes slashing public assistance and government support to municipalities and institutions like Puerto Rico’s robust university system, as well as major cuts to public education and a massive slate of school closings.

In a post-Maria world, the goal of this program is essentially to starve off the informal economy and massive public sector that have developed over time in Puerto Rico , and replace them with a robust formal tourism industry and private developers, all buoyed by an influx of credit from mainland investors. But that program has highlighted another rift within the territory, one in which public-sector employees and students are naturally squeezed and now find themselves often in protest.

Even as those tensions heighten within the increasingly complicated social and political structures within Puerto Rico, rebuilding is still taking place. After eight months in the dark for some citizens, most of the power grid is back in place.

It’s still fragile, and still faces outages during storms in some areas, but the deafening hum of generators that characterized the island’s metropolitan areas after Maria is no longer. Most of the critical roads are repaired, and the hospitals are in no worse condition than they were before the storm.

Tourism is back—and this week especially, Rosselló has made a show of entertaining visitors—even though some of the signature hotels in San Juan and Old San Juan still haven’t been rebuilt.

Officials within the tourism industry have decried news coverage of dysfunction and destruction in favor of a narrative that highlights strong recovery.

“Six months after Hurricane Maria hit, more than fifty percent of travelers said media coverage negatively impacted their view of Puerto Rico as a destination and we’re hoping to change that as the one year anniversary approaches,” said Brad Dean, the CEO of Discover Puerto Rico, a new nonprofit created to promote tourism, in a press release earlier this month.Still, it’s hard to visit Puerto Rico and not see that the recovery is incomplete, perhaps even hollow in some places.

The blue tarps covering roofs are so common that they are visible on the flight into San Juan. Municipalities far away from the bustle of the capital still lag behind in rebuilding, only compounding the miseries of rural, poorer residents that existed before the storm. As Kathy Gannett, a resident of Vieques, a small island off the eastern coast, told me, most of the population there still has “great needs for housing, health services, sustainable energy, jobs, ferry service, and mental-health services.”
One of the most difficult problems for the island to deal with is the fact that so many people have left it. According to an analysis released Thursday by the Center for Puerto Rican Studies at Hunter College in New York, almost 200,000 people have departed for the mainland in the year since the storm.
That’s a steep drop of about 6 percent from the total population of roughly 3 million people, and it’s on top of the half million residents who left in the 12 years before Maria. According to Edwin Meléndez, the center’s director, the exodus of Puerto Ricans to the mainland “is an indication of stagnant conditions on the island and the impatience of the population with the governmental responses at all levels.”
Those numbers get to the heart of the problem in Puerto Rico, one that exists beyond Trump’s government, and one that Maria exposed rather than created. It’s that the political and economic situation of the island is untenable, and that the old specter of colonialism is more and more unbearable.
As people continue to leave, the disaster of Hurricane Maria is still exerting its influence, and the political questions of how to truly confront the catastrophe and its root causes are in front of the island and its diaspora—not behind them.
A year is not enough time to measure the scale of a disaster as massive as Maria. The effects on local and federal politics alone will reverberate through future elections. The effects on the economy of Puerto Rico have only just begun, and it increasingly looks like the hurricane marks an epochal shift in the nature of the relationship between the island and the broader United States. Puerto Rico se levanta, but exactly where it will rise is still a mystery.
We want to hear what you think about this article. Submit a letter to the editor or write to letters@theatlantic.com
or leave a message on this article or email at
adamfoxie@Outlook.com

VANN R. NEWKIRK II is a staff writer at The Atlantic, where he covers politics and policy.

Over 5.6 Million Reads Adam Gonzalez at September 23, 2018 No comments: Links to this post