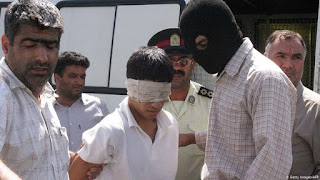 I'm sharing this new story as it appeared yesterday on DW.com

The US on Wednesday accused Iran of violating fundamental human rights after Iranian Foreign Minister Mohammed Javad Sarif endorsed the execution of gay people.
Sarif defended his country's draconian policies at a joint press conference with German Foreign Minister Heiko Maas in Tehran on Monday.
A reporter from German tabloid Bild asked: "Why are homosexuals executed in Iran because of their sexual orientation?"
He responded: "Our society has moral principles. And we live according to these principles. These are moral principles concerning the behavior of people in general. And that means that the law is respected and the law is obeyed," after railing against human rights violations by the US and Israel.
Maas, who was in Iran to negotiate the continuation of the nuclear deal, largely ignored the issue at the time.
Read more: Amnesty International reports global drop in executions
Shadi Amin, an Iranian writer and activist who now lives in Germany, told DW-Farsi that she was "outraged" by the Iranian foreign minister's comments. "Humiliation, repression and sexual harassment of a particular social group should be viewed critically and prohibited by law," Amin said.
"Violating LGBT rights under the guise of 'moral principles' shows that Zarif doesn't respect human rights. LGBT rights are human rights. Iran must not violate them by giving religious or cultural reasons," she said. "New laws have made societies aware of the differences and accept them."
"Many homosexuals tell us of abuse, torture and threats faced by their families and friends. As long as the country's laws do not change, the situation of homosexuals in Iran will not improve," said Amin.  Inhuman and unacceptable
The German Foreign Ministry's Michael Roth later clarified to Bild: "LGBTI rights are human rights. And they have always been. Everywhere. No religious, cultural or ethnic tradition justifies state persecution, especially the execution of homosexuals. In Iran and seven other countries worldwide, homosexuals face the death penalty. That is inhuman and completely unacceptable."
His comments came after Maas was criticized by German politicians for not addressing the issue at the time.
The US ambassador to Germany and the country's most senior openly-gay official, Richard Grenell, on Wednesday slammed Iran for its position in comments to German and Israeli media.
"The Iranian regime has violated basic principles of the United Nations," he told the German Press Agency (DPA).
"UN members should honor (the UN Universal Declaration of Human Rights) if they want to be members at all. The criminalization of homosexuality plainly violates this declaration."
Homosexuality violates Islamic Law in Iran and can be punishable by death. Several thousand people have been executed for homosexuality since the 1979 Islamic revolution, according to some rights activists.


The mayor of an Alabama town reportedly called for "killing out" gay people in a since-deleted Facebook comment.
Mark Chambers lumped "homosexuals" and "transvestites" together with "baby killers" and "socialists" in the post, according to TV station WBRC.
The Carbon Hill mayor reportedly maintained his words had been taken out of context, before apologizing.
A gay rights group has demanded his resignation. The mayor could not immediately be reached for comment.
According to WBRC, Mr. Chambers posted on Facebook a graphic that read all in capital letters: "We live in a society where homosexuals lecture us on morals, transvestites lecture us on human biology, baby killers lecture us on human rights and socialists lecture us on economics!"
The mayor reportedly commented on the post: "The only way to change it would be to kill the problem out. I know it's bad to say but without [sic] killing them out there's no way to fix it."
The comment prompted calls for the mayor to step down, including from the Alabama branch of the Human Rights Campaign.
The group called Mr. Chambers' comments "horrifying, unconscionable and unacceptable".
"LGBTQ people face disproportionate levels of violence and harassment in their daily lives - a fact that is especially true in Alabama. Mayor Chambers must be held to account."
Mr. Chambers has given no signal that he will step down as mayor of Carbon Hill, a town of fewer than 2,000 people, 150 miles (240km) north of the state capital, Montgomery.
When WBRC contacted Mr. Chambers, he initially denied writing the comment, according to the Birmingham, Alabama-based news station.
But in a subsequent call, he reportedly told WBRC he had made the comment public by mistake and intended to send it privately to a friend.
During his phone call with the TV station, Mr. Chambers also reportedly mentioned immigrants in the US, calling them "ungrateful" and arguing they were taking over the country.
US media report that Mr. Chambers posted an apology to his Facebook page, writing: "Although I believe my comment was taken out of context and was not targeting the LGBTQ community, I know that it was wrong to say anyone should be killed [sic]."
Mr. Chambers has been mayor of Carbon Hill since 2014.
According to the town website, he ran for office because Carbon Hill "was not going in a positive direction".
Over 5.6 Million Reads Adam Gonzalez at June 06, 2019 No comments: