I will like to share this article with GLAAD. It shows without a doubt how far LGBT have reached and how they are slipping in today's political environment. Lies, corruption does not seem to matter if people can feel psychology better about themselves and have $20-$30 dollars more in their paychecks which they will pay very rapidly in interest rates, higher food prices and more local tolls and local taxes.

While the past several decades have yielded remarkable progress for the LGBTQ community in the United States, acceptance of LGBTQ people is slipping, and discrimination is increasing, in the face of attacks, bias, and erasure by the Trump administration. This is the first time the Accelerating Acceptance report has shown a drop in acceptance for LGBTQ people. 2017 has demonstrated that the path to full equality and acceptance is not guaranteed, but in the face of this erosion GLAAD will work to ensure 100% acceptance of LGBTQ people everywhere.
Read the report
Over 5Million Reads Adam Gonzalez at January 26, 2018 No comments: Links to this post

20% of American Millennial’s Identify as LGBTQ 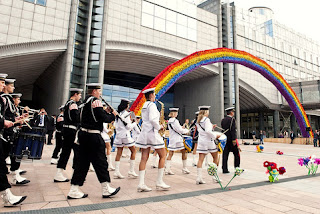 GLAAD is posting an online poll which shows a stunning 20 percent of American millennials aged 18-34 “identify as LGBTQ,”

GLAAD said its third annual Accelerating Acceptance report also noted an increase in acceptance of LGBTQ lifestyles in 2015, citing that year’s controversial 5-4 Supreme Court decision in favor of same-sex marriage.
The organization lamented that such headway was not as evident in 2016, when progress “slowed.”

Activists such as Dan Avery at LGBT entertainment website NewNowNext praised the report, hailing it as a harbinger of “a new openness about sexual orientation and gender identity.”

These results came from “among 2,037 adults ages 18 and older, including 1,708 adults who self-identified as heterosexual.” The poll was conducted online – generally and not one on one.  There are no details provided regarding how people were selected to participate.

Alfred Kinsey, the notorious ‘father of the sexual revolution’ claimed 10 percent of the male population in the 1950s was “gay.”  It is very hard for those numbers to be verified or discounted because of the amount of men and women that do not feel comfortable either admitting they are gay or sharing that information. Adamfoxie.blogspot.com has always maintained that whatever numbers we get from any source we have to acknowledge those numbers not to be completely true and the actual numbers should be higher. On any poll there should be a disclaimer that not all people that belong to the LGBTQ category would be included. Even today the LGBTQ community is one that is maligned and in some circles in our own USA there are people in government that are working to put this community in reversed in the amount of equal human and  civil rights but more hidden is the constant suppression of numbers making the community appear less politicly powerful that what it really is. In politics is the numbers that count! It took a lot of efforts and lobbying to the past Obama administration to have LGBT included in the census being that we could get a better picture of the size of the community since they would in many cases be filing the forms out in privacy. The next census if this President who pledged to protect the LGBTQ community, just like he promised no lies and an scandal free administration together with health care, is erasing the LGBT from the 2020 Census. Some in the community and mainly outside sing the praises of the accomplishments the community is had and some bloggers ares saying we don’t need the census or numbers to be a free community. Well, under that premise we also don’t need same sex marriage nor any civil rights we have gotten up to this point in this country. Silly🐷🐸 of coarse we need an idea of our numbers because services are based on that as well as Congressmen/women are chosen acceding to the numbers on each district and districts are formed by numbers.

The GLAAD results were derived from a Nov. 2-4, 2016, survey. Some respondents were disqualified because they declined to answer gender identity questions, and no margin of error was provided.

Despite increasing numbers GLAAD stated concerns about the Trump administration not allowing the LGBT community not to be counted in the 2020 census. This is a major set back coming after only one census.
“As the Trump administration begins to fulfill its pledges to move the country backwards, many are concerned about progress made in recent years for the LGBTQ community,” she wrote. “However, this report shows a remarkable new era of understanding and acceptance among young people – an inspiring indication of the future.

“Though laws can be unwritten, hearts and minds of America have been changed for the better – and that is a reality less easily unraveled.”

12 percent of millennials identify as transgender or gender non-conforming, meaning they do not identify with the sex they were assigned at birth.

Older generations largely use the words “gay” and “lesbian” and/or “man” and “woman” to describe their sexual orientation and gender identity respectively, millennials appear more likely to identify in terminology that falls outside those previously traditional binaries.
And while levels of “discomfort” with alternative sexual lifestyles declined 3 percent from 2014-2015, they were unchanged from 2015-2016.

**The following is GLAAD’s survey as reported on their web site:

Read more »
Over 5Million Reads Adam Gonzalez at April 01, 2017 No comments: Links to this post