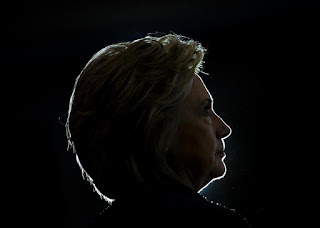 In her new book about her time on the campaign trail, Hillary Clinton said her "skin crawled"  when then-candidate Donald Trump loomed over her during a presidential debate.
"'This is not OK,'" she recalled thinking in What Happened, set to come out Sept. 12. "Two days before, the world heard him brag about groping women. Now, we were on a small stage and no matter where I walked, he followed me closely, staring at me, making faces. It was incredibly uncomfortable. He was literally breathing down my neck. My skin crawled."
The excerpt comes from an audio excerpt of the book, which was released Wednesday by MSNBC.
Trump's lurking during last year's second presidential debate in St. Louis on Oct. 9 turned heads at the time. The future president was awfully close to his Democratic challenger, who answered a question as he stood behind her.
Clinton said she gripped the microphone "extra hard" and was able to keep her cool because of "a lifetime of dealing with difficult men trying to throw me off."
But she did imagine the alternative, which she admitted would have made for better television.
"Do you stay calm, keep smiling and carry on as if he weren't repeatedly invading your space?" she asked herself. "Or do you turn, look him in the eye, and say loudly and clearly, 'Back up, you creep. Get away from me. I know you love to intimidate women, but you can't intimidate me, so back up.'"
The book, as she references in the audio clip, will feature parts of the campaign she remembers fondly and others she'd rather do over.
"If the Russians could hack my subconscious, they'd find a long list," she said.
She called the campaign, "exhilarating, joyful, humbling, infuriating and just plain baffling." She added she couldn't bear the idea of letting millions of people down.
"But I did," she conceded. "I couldn't get the job done and I'll have to live with that for the rest of my life."
Sean Rossman, USA TODAY
Sean Rossman on Twitter: @SeanRossman
Over 5Million Reads Adam Gonzalez at August 24, 2017 No comments: Links to this post

Bill: ”Trump Don’t Know Much but to Get Angry and White Men to Vote for Him” 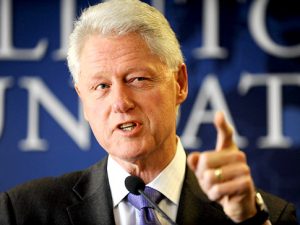 Bill Clinton says President-elect Donald Trump "doesn't know much," but that "one thing he does know is how to get angry, white men to vote for him," according to a local paper near the Clintons' New York home.

In comments to the weekly Bedford and Pound Ridge Record-Review, Clinton veered between defiance and bitterness while discussing the 2016 election — blaming FBI director James Comey for his wife's defeat, and urging voters to "stay vigilant, stay alert" and "see where this changing political reality takes us."

"James Comey cost her the election," Clinton said during a lengthy conversation, according to the paper. He argued that “we were seven points up" in polls and on track to win, before the FBI director made an 11th-hour announcement that the bureau's probe into Hillary Clinton's email use as Secretary of State was being reexamined in light of potential new evidence.

The FBI never changed its conclusion that Clinton shouldn’t be punished related to her email use, but Bill Clinton said the high-profile focus on the story so close to the election inflicted significant damage on the campaign.

According to the Record-Review, Clinton suggested the confusion created by Comey’s announcement lead voters to not knowing what information to trust, and that not enough was made of the fact that the FBI boss said days later there was no new evidence of illegal activity.

Asked about the role played in the election by Russian hacking, the former president said that “you would have to have a single-digit IQ not to recognize what was going on."

Later, Clinton marveled at Trump’s tone during a phone call the day after the election, saying that Trump acted "like it was 15 years ago," when he was still friendly with the family.

Still, despite Trump's overtures, Clinton seemed less inclined to let bygones be bygones, slipping in a dig at Trump's claim that he won a "landslide" victory. "Landslide? I got something like 370 electoral votes. That was a landslide,” he said.

Speaking to reporters in Albany on Monday after casting his Electoral College vote for his wife, Clinton addressed the reasons why he thought she lost the election.

"I watched her work for two years, I watched her battle through that bogus email deal, be vindicated at the end when Secretary Powell came out -- she fought through that, she fought through everything," he said. "She prevailed against it all. But at the end, she had the Russians and the FBI deal. She couldn't prevail against that. She did everything else and still won by 2.8 million votes.”

Over 5Million Reads Adam Gonzalez at December 20, 2016 No comments: Links to this post