A Lawless President Tweets The Name of "The Whistleblower"

US President Donald Trump is facing staunch criticism for retweeting a post that included the alleged name of the whistleblower whose complaint led to the president's impeachment.
Mr. Trump shared a post from a user named @surfermom77, who described themselves as a "100% Trump supporter".

The retweet seemed to disappear from the president's timeline for a period but was visible again later.
Mr. Trump has repeatedly called for the whistleblower to be identified.

The US has federal laws that guarantee the protection of whistleblowers, designed to shield those who come forward with evidence of wrongdoing by the government.

In November, lawyers for the whistleblower - who is said to work in the US intelligence community - issued a cease-and-desist warning to the president, saying their client was "in physical danger". But the president ignored the warning and continued to call for them to be named.
According to a report by the Associated Press, the account bears the hallmarks of an automated "bot" account, "including an unusually high amount of activity and profile pictures featuring stock images from the internet".

The account's profile picture - a stock photo of a woman in business attire that was pulled from the internet - was changed on Saturday to an image of Mr. Trump.

There was some speculation about whether Mr. Trump deleted the retweet after the outcry.
Twitters users said they were unable to see the post on his timeline on Saturday morning after he shared it at around midnight on Friday.

On Saturday afternoon, Twitter said there had been a glitch in its system, which had made some tweets invisible to some users, although the company did not specify how many people were affected or make a direct connection to this specific controversy.

The retweet was visible again in the president's feed by Sunday morning. His account is followed by 68 million people.

What was the reaction?
The president had already faced criticism from Democratic leaders over his ongoing efforts to publicize the whistleblower's identity.

In response to his retweet on Saturday, attorney Stephen Kohn, an expert in whistleblower protection laws, told the Washington Post that the president was violating his duty to safeguard whistleblowers.
"The paradox is that it was the president's duty to protect this person," Mr. Kohn said. "It's inconceivable that he not only doesn't do it but violates it."

A former whistleblower told the Associated Press that the ease with which the person's identity had been spread online demonstrated the need for greater legal protection.
Michael German, who left the FBI after reporting allegations of mismanagement, said it was "completely inappropriate for the president of the United States to be engaged in any type of behavior that could harm a whistleblower".
The controversy centers around a call between Ukraine's President Volodymyr Zelensky and President Trump
With a wealth of first-hand testimony, Democrats have moved the impeachment on from the whistleblower's evidence. But the president and other Republicans have worked to keep the whistleblower in the press.

In an audio recording that emerged in September, President Trump was heard comparing the whistleblower's sources to a "spy". Then in an apparent reference to the execution of spies by the US in the past, he said: "You know what we used to do in the old days when we were smart? Right? With spies and treason, right? We used to handle them a little differently than we do now."

According to reports in the Washington Post and the Guardian, the person named by right-wing media as the whistleblower was receiving a spike in threats when the president tweeted about them and was being driven to and from work by armed security officers following the threats.

How did the whistleblower become involved?
In August, the whistleblower filed a report expressing concern over a phone call a month earlier in which Mr. Trump asked his Ukrainian counterpart Volodymyr Zelensky to investigate Joe Biden, a Democratic front-runner for the 2020 US presidential election.

Democrats said the call transcript showed President Trump abusing the power of his office to pressure President Zelensky to damage a US Democratic political rival. President Trump defended the call, saying it was "perfect". He has dismissed the impeachment process as a "witch-hunt".

Media caption"Cheapened the process of impeachment" - Trump reacts at a rally
The whistleblower's report led ultimately to an inquiry in the House of Representatives which culminated in the president's impeachment on charges of abuse of power and obstruction of Congress, making Mr. Trump only the third president in US history to be impeached.

The president now faces a trial in the Republican-controlled Senate, which is expected to acquit him along party lines.

Over 5Million Reads Adam Gonzalez at December 29, 2019 No comments: Links to this post

Email ThisBlogThis!Share to TwitterShare to FacebookShare to Pinterest
Labels: Trump Lock Him Up

Trump Came to National Park to Get Kudos Instead He Got "Lock Him Up Lock Him Up"(Karma?) 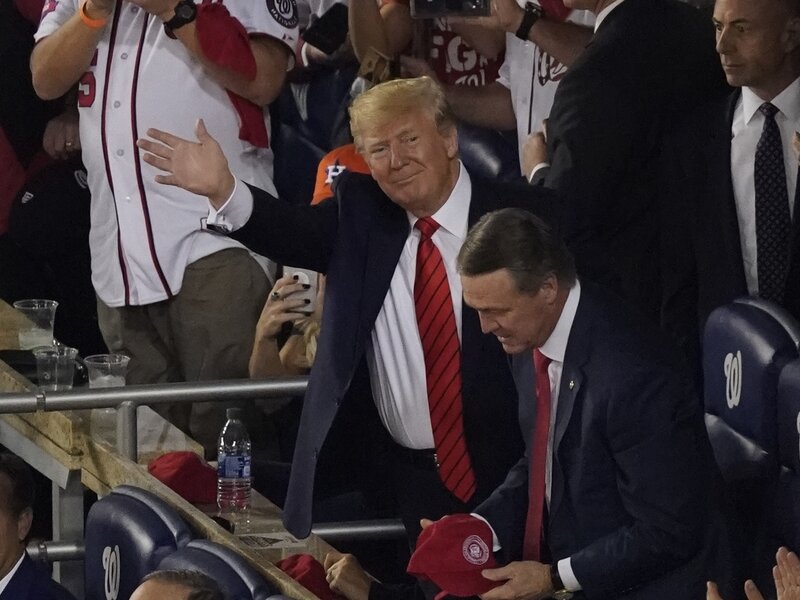 Fresh off announcing the death of one of the world's most wanted terrorists, President Trump appeared at Game 5 of the World Series to find a crowd not eager to praise his achievement.
BOBBY ALLYN
NPR.org

When Trump's attendance was announced over the public address system at Nationals Park Sunday night, baseball fans greeted the president with loud boos and jeers. Sections of the ballpark chanted "Lock him up!" — a spin on Trump's refrain against Hillary Clinton that has remained common at his rallies even after the 2016 election.

President Trump was booed loudly by the fans at Nats Park when he was shown on the big screen.
Then came a loud chant: “Lock him up.” @wusa9 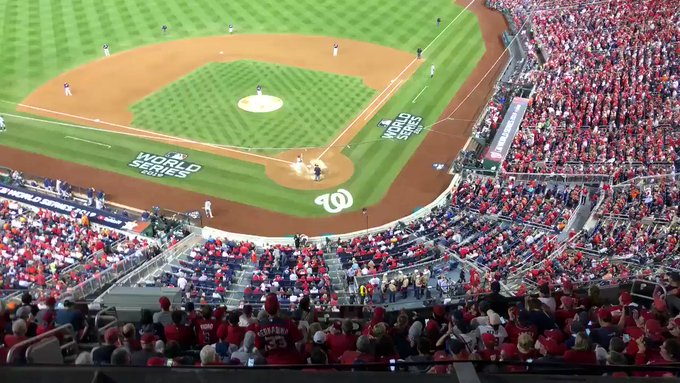 
33.5K people are talking about this

Trump, standing next to first lady Melania Trump, appeared unperturbed by the din, smiling and clapping before moving to say something to House Minority Leader Kevin McCarthy.
Later in the game, fans unfurled a "VETERANS FOR IMPEACHMENT" banner right behind home plate.
In a press conference before the game, Nationals manager Dave Martinez said of Trump: "He's coming to the game. He's a fan. Hopefully, he cheers for the Washington Nationals, and I hope he enjoys the game."
Asked if the Nationals wanted Trump there, Martinez said: "We haven't really talked about it. We're focusing on playing baseball." The Nationals ended up getting walloped by the Houston Astros, 7-1. They now trail in the seven-game series, 3-2. 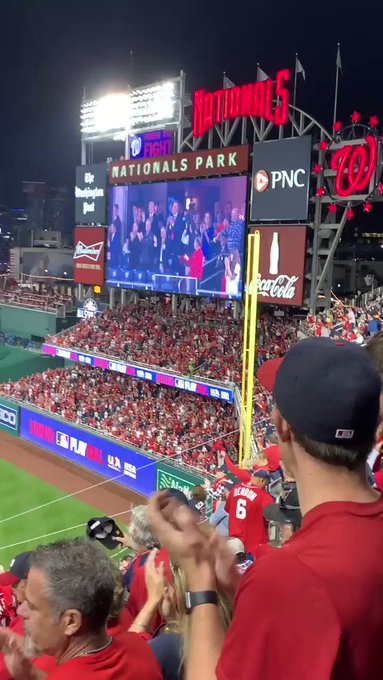 It's rare to see Trump out in public in Washington, a Democratic stronghold in which just 4 percent of the residents voted for Trump in the 2016 general election.
In a break with tradition, Trump did not throw out the ceremonial first pitch Sunday night, as is customary when a sitting president attends a baseball game.
While league officials said Trump said he was not interested in throwing the first pitch, citing concerns about slowing down thousands of fans entering the ballpark, Nationals principal owner Mark Lerner indicated that there were many other first pitch candidates who were considered before the president.
Last week, Trump told reporters that the bulletproof vest he would have to wear made the idea of tossing the ball from the mound unappealing.
"They gotta dress me up in a lot of heavy armor. I'll look too heavy. I don't like that," Trump said. 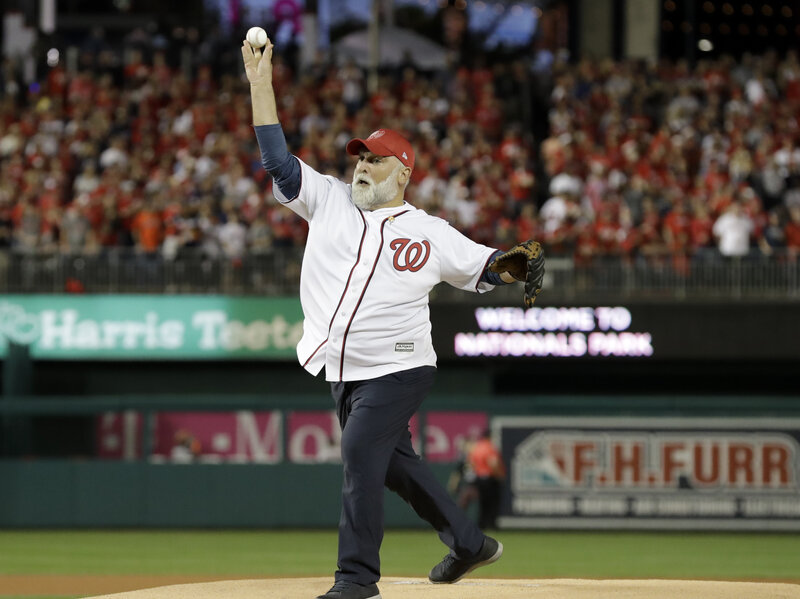 On Sunday evening, Andrés thanked the Nationals and the league for
inviting an immigrant to throw the first pitch.

Instead of the president, José Andrés, a Spanish-born chef, and restaurateur known for providing free emergency meals to hurricane victims as well as to furloughed federal workers, threw out the first pitch to stadium-wide applause.
Andrés has long been an outspoken critic of Trump, especially the president's hardline immigration policies.
In 2015, Andrés pulled out of a plan to open a restaurant in the Trump International Hotel in Washington after then-candidate Trump made disparaging remarks about Mexican immigrants, calling them drug dealers and rapists as he campaigned for office.
On Sunday evening, Andrés thanked the Nationals and the league for inviting an immigrant to throw the first pitch.
Over 5Million Reads Adam Gonzalez at October 29, 2019 No comments: Links to this post

Email ThisBlogThis!Share to TwitterShare to FacebookShare to Pinterest
Labels: Trump Lock Him Up
Older Posts Home
Subscribe to: Posts (Atom)