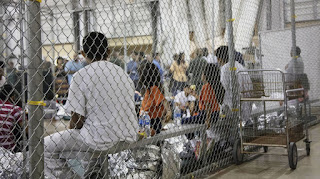 If you are among the two-thirds of Americans who disapprove of the Trump administration’s new “zero-tolerance” policy of separating the children of undocumented immigrants from their parents at the US-Mexico border, you might be wondering what you can do about it.
There’s growing pushback against the policy, both at the grassroots level and among politicians on both sides of the aisle. In this week alone, dozens of prominent Republicans have joined their Democratic colleagues in clamoring for US president Donald Trump to stop the practice. Even if you’re not an elected official, you have a role to play in reversing the separation of thousands of migrant children from their families. Here are a few ways to do that:

If you’re an immigration lawyer

The following organizations have pro bono networks or ways for immigration lawyers to volunteer their time and their legal services to immigrants in need:
Posted on Quartz Media Originally written by Annabelle Timsit

Over 5Million Reads Adam Gonzalez at June 20, 2018 No comments: Links to this post

FB May have Influenced The Election and Regulations Should Be Forthcoming?Jail For French President?

In a flurry of media interviews on Wednesday, Facebook CEO Mark Zuckerberg said he is willing to testify before Congress, that he can't guarantee that Russians didn't get their hands on Facebook user data and that he isn't sure Facebook shouldn't be regulated.

Why it matters: After remaining silent for several days, Mark Zuckerberg has given interviews with outlets including CNN, Wired, the New York Times and Recode. The interviews answer some, but definitely not all of the questions left unanswered by his earlier Facebook post.

Wired asks "How confident are you that Facebook data didn’t get into the hands of Russian operatives—into the Internet Research Agency, or even into other groups that we may not have found yet?"

I can’t really say that. I hope that we will know that more certainly after we do an audit. He told Recode he is open to testifying before Congress — if he is the right Facebook executive to do so.
I’m open to doing that... We actually do this fairly regularly ... There are lots of different topics that Congress needs and wants to know about, and the way that we approach it is that our responsibility is to make sure that they have access to all of the information that they need to have.


That is hard. It's really hard for me to have a full assessment of that.

CNN: Given the stakes, why shouldn't Facebook be regulated?

I actually am not sure we shouldn't be regulated.
He also finally apologized, in the Recode interview.

We let the community down and I feel really bad and I’m sorry about that.
In the New York Times interview (and he made a similar point on CNN), Zuckerberg painted the issues as hard to foresee.

If you had asked me, when I got started with Facebook, if one of the central things I’d need to work on now is preventing governments from interfering in each other’s elections, there’s no way I thought that’s what I’d be doing if we talked in 2004 in my dorm room.


In one of the most aggressive cover story treatments of the President-elect yet, the January 2017 issue of Harper’s depicts Donald Trump behind bars and features the cover lines: “Make America Great Again And Stop Trump Before He Starts.”
The digital edition is available today, but at least one hard copy was on display, peeking out of a Harper’s magazine bag, tucked underneath a Christmas tree with other presents in the lobby of Trump Tower.

The "present" was left under the tree by Harper's staffers at 2:29 p.m. Thursday.
"I'm awaiting word on how long it remained," confided a Harper's spokesperson, adding: "I asked them to set a timer."

Later, she confirmed that "it remained for about as long as it took to take the photo. But they left some on a table at Trump Grill."

Trump should take a look at what is happened to the French President Sarkozy of just one election away in France. No one here is saying, President Nicholas Sarkozy is guilty but he is facing charges and will have to answer those charges if his election campaign accepted money from an enemy of France, Putin...I mean Lybia's Gadafi, then.

I caught this on the Staten Herald while I waited at the bank and immediately it was Donald Trump's picture that came to mind. The alleged crimes are similar if the Special Prosecutor connects Putin to Trump which to an untrained eye unless there is hiding evidence to exonerate Trump, Otherwise was the connection of money not just to Trump's campaign but to his son in law Mr. jar

This would be a good show to watch like we have seen it in Italy and other countries but now is happening to a country which used to be the leader of the free world and always a beacon of freedom to so many facing hunger, sickness, and death, not of their own making.

This is a picture Trump has not seen and maybe is up to us to tweet it or somehow remind him that there are laws. Our system works with people of power by giving them lots of rope, so at the beginning, they are doing whatever they want with the rope but at the end, the rope tightens and a noose forms. Ask Nixon and others even though Trump will have the privilege to deliver to his voters the destruction of some of our institutions down. Justice is the first one he has attacked. Why? Dept of Justice with the FBI and Special Prosecutor are the ones that can come after him. Even his staff he has changed so there would be no chance the staff will ask Congress to appoint a replacement because the President can not exercise his powers without destroying us (as the Constitution allows). This is like windows being blown out on a flying jet and now is suffering decompression and anything not nailed down will fly out the windows to the abyss.

It is adamfoxie's 10th🦊Anniversay. 10 years witnessing the world and bringing you a pieace whcih is ussually not getting its due coverage.
Over 5Million Reads Adam Gonzalez at March 24, 2018 No comments: Links to this post