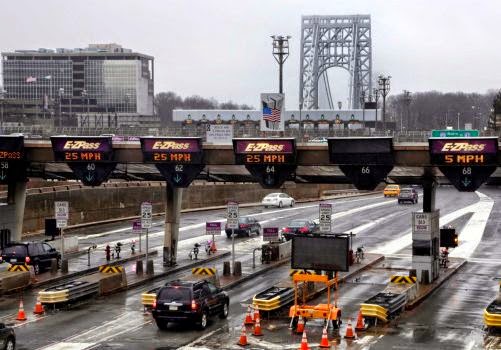 Police officers on the George Washington Bridge last September during lane closures apparently ordered by Republican Gov. Chris Christie's aides as political payback said they warned superiors about the hazardous conditions created and were told not to talk about it on their radios, according to a summary provided by their lawyer to a legislative panel investigating the scandal.
Attorney Dan Bibb, who works for the union representing the Port Authority of New York and New Jersey officers, relayed information from 11 officers, including at least three who said they were told about the traffic change by a lieutenant who ordered them not to move the traffic cones blocking the lanes. Bibb's comments were included in a synopsis obtained by The Associated Press on Wednesday.
Bibb told the legislative panel's investigators that one of the officers, Steve Pisciotta, used his police radio to report hazardous conditions being caused by the severe traffic and was told to "shut up" by Deputy Inspector Darcy Licorish. Bibb said Pisciotta told him that Lt. Thomas Michaels and a sergeant visited him "to tell him that his radio communication had been inappropriate."
Michaels said in an earlier interview with the investigators that the Port Authority executive who ordered the closures, David Wildstein, called him the week before and asked him what would happen if three lanes were reduced to one. But the investigators said he told them that he didn't have any direct knowledge about why the lanes were changed and that he found out about the plan to change them the night before.
Lawyers representing Michaels and Licorish didn't immediately return phone calls seeking comment on Wednesday.
Christie spokesman Kevin Roberts referred to a statement issued earlier this year in which he said Christie never had conversations with Michaels about the bridge, which connects Fort Lee and New York City. Christie, a potential 2016 presidential candidate, has called the lane closings "inexplicably stupid" but said he didn't know about them beforehand.
Investigators are looking into who approved closing the lanes in Fort Lee, causing four days of massive traffic jams, apparently to punish its mayor, Mark Sokolich, a Democrat who didn't support Christie for re-election. The lane closures came weeks after Christie's then-deputy chief of staff, Bridget Kelly, sent a message to Wildstein: "Time for some traffic problems in Fort Lee."
Michaels, who grew up in Livingston with Wildstein and Christie and coached Christie's son's hockey team, told the investigators that he drove Wildstein through Fort Lee to get a closer look at the traffic on the first morning of the lane closures and that Wildstein told him they were part of a traffic study. He told the investigators that he didn't discuss anything "substantive concerning the lane closures" with Wildstein while eating breakfast with him that morning.
He told them he had only occasional interactions with Christie at the hockey rink and didn't otherwise talk with him. His brother was a campaign adviser for Christie in 2009.
Wildstein graduated from Livingston High School a year before Christie and was hired in 2010 at the Port Authority by Christie's top appointee there, deputy executive director Bill Baroni.
In January, Wildstein appeared before the legislative committee investigating the lane closures but declined to answer any questions. Kelly, who was fired in January, also refused to cooperate with the legislative committee.
The Record was the first to report on the Bibb document.
___
Associated Press writer Jill Colvin contributed to this report from Mexico City.
Over 5.6 Million Reads Adam Gonzalez at September 04, 2014 No comments: