5 Instances That Gen. Mattis Reined In The Bull To Not Break Out Off The Corral and Go intoThe China Shop

The Week reports 5 things General Mattis successfully reined in the bull,  which would have destroyed our sense of security and for sure now, or later, lead us to war.

When James Mattis resigned as defense secretary Thursday, the "guardrails" in Trump's administration came off, as The Associated Press somewhat worryingly put it.
Mattis has gained a reputation for trying to prevent Trump from indulging in his worst foreign policy impulses. With Mattis on his way out (he'll officially step down in February), let's take a look back at some of the instances of Mattis successfully reining the president in. Brendan Morrow
1. Killing Assad. Last year, Trump reportedly called for the assassination of Syrian President Bashar al-Assad, saying, "Let's f---ing kill him! Let's go in. Let's kill the f---ing lot of them," according to Bob Woodward's book Fear, per The Washington Post. Mattis immediately told an aide, "We're not going to do any of that."
2. Pulling out of Afghanistan. Trump reportedly told his advisers in 2017 that he wanted to withdraw troops from Afghanistan, but he ended up deploying 3,000 more at Mattis' direction, per Politico. In a speech, Trump said that his "original instinct" was to pull out but that he changed his mind after "many meetings." The same day Mattis resigned, it was reported that Trump would be pulling troops out of Afghanistan.
3. Sending troops to the border. Politico also points out that Trump wanted to send active-duty troops to the southern border in April 2018, but Mattis pushed back, sending National Guardsmen instead. Trump eventually did deploy troops in the fall, but Mattis broke from the president by saying these troops would not use force.
4. Torturing people. On the campaign trail, Trump promised to reinstitute torture methods like waterboarding. He never did, and Mattis seems to be a key reason for that; Trump said he was "impressed" by a conversation he had in which Mattis told him these methods are not useful, per The New York Times.
5. Pulling out of Korea. Trump, according to Woodward's book, expressed frustration with the U.S.'s presence in the Korean Peninsula, The Washington Post reports. Mattis had to convince him why this is necessary, saying, "We're doing this in order to prevent World War III."
Over 5Million Reads Adam Gonzalez at December 21, 2018 No comments: Links to this post

In Many Parts of Puerto Rico it seems like the storm hit yesterday. The damage it is still there.

Poor communities in urban areas like Santurce and Loíza are struggling with severely damaged housing, the loss of jobs and small businesses, and sluggish responses from the Federal Emergency Management Agency. In rural communities, it’s even worse. Julia Rivera, a mother of nine in Utuado, a mountainous town in the path of Maria’s center, still needs funds to repair her leaking roof. “I have lost everything but my faith in God,” she lamented.

Puerto Rico was experiencing a health care crisis before Maria, with doctors leaving in droves for the mainland and severe cuts in Medicaidlooming. In Vieques — an island on the east coast of Puerto Rico that once housed a United States Navy base — the hospital was flooded and then overtaken by toxic mold. The hospital remains closed, and patients can receive only basic care in temporary medical facility.

In Palo Seco, Juanita and Artemio García, who would like to rebuild their local cafe, are weighing whether to move to Orlando, Fla., to be with their son, a music teacher, and his children. “I still haven’t made up my mind,” Mr. García said. “My son keeps asking, and maybe he’s right. I miss my grandchildren.”

And yet, as spring approached, my mother began to miss the rhythms of her barrio. In February, we heard that the power there had been restored. Her sister, Mercedes, and her neighbors had made their way back. Though we had wanted so much for her to stay, we knew it was time for her to do the same. She needed to be in the place that made her feel alive.

Ed Morales teaches at Columbia University’s Center for the Study of Ethnicity and Race and his latest book is “Latinx: The New Force in American Politics and Culture.”
Joseph Rodriguez is a photojournalist whose latest book is “Spanish Harlem: El Barrio in the ’80s.” This article was produced with support from the Economic Hardship Reporting Project.
Produced by Jeffrey Henson Scales and Isvett Verde

Over 5Million Reads Adam Gonzalez at September 24, 2018 No comments: Links to this post 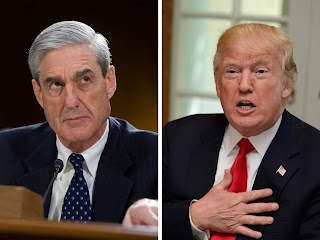 Special counsel Robert Mueller’s team has been rifling through president Trump’s copious array of tweets, the New York Times reports (paywall). The focus is part of a larger probe into whether Trump obstructed justice while the FBI was investigating Russia’s relationship with his campaign.

The special counsel is not likely to point to individual tweets as standalone evidence of obstruction but to place them in a larger narrative of private and public efforts to meddle with the investigation, according to the Times.

Mueller is reportedly focusing on tweets about fired FBI director James Comey and attorney general Jeff Sessions, plus former deputy FBI director Andrew McCabe. Trump notoriously fired Comey in May 2017, supposedly over Comey’s handling of the investigation into Hillary Clinton’s emails, though Trump later told NBC it was because of “this Russia thing.” Trump was also infuriated that Sessions recused himself from the probe.

Here are a few tweets—including those cited by the Times—that could be clues for Mueller.
Tweets about Comey

Below is the first negative tweet Trump posted about Comey after assuming the presidency. This was six days before Comey’s firing, and followed several interactions in which Comey says Trump asked him for “loyalty” and to “lift the cloud” of the Russia investigation. (Trump has denied asking Comey for loyalty.)

Trump was reportedly pushing for Sessions’ resignation in May and July 2017. Some relevant tweets during, and after, those times:

✔
FBI Director Comey was the best thing that ever happened to Hillary Clinton in that he gave her a free pass for many bad deeds! The phony...
✔
...Trump/Russia story was an excuse used by the Democrats as justification for losing the election. Perhaps Trump just ran a great campaign?

✔
James Comey better hope that there are no "tapes" of our conversations before he starts leaking to the press!

✔
...people not interviewed, including Clinton herself. Comey stated under oath that he didn't do this-obviously a fix? Where is Justice Dept? James Comey is a proven LEAKER & LIAR. Virtually everyone in Washington thought he should be fired for the terrible job he did-until he was, in fact, fired. He leaked CLASSIFIED information, for which he should be prosecuted. He lied to Congress under OATH. He is a weak and.....

✔
Unbelievably, James Comey states that Polls, where Crooked Hillary was leading, were a factor in the handling (stupidly) of the Clinton Email probe. In other words, he was making decisions based on the fact that he thought she was going to win, and he wanted a job. Slimeball!

✔
The big questions in Comey’s badly reviewed book aren’t answered like, how come he gave up Classified Information (jail), why did he lie to Congress (jail), why did the DNC refuse to give Server to the FBI (why didn’t they TAKE it), why the phony memos, McCabe’s $700,000 & more?

✔
James Comey illegally leaked classified documents to the press in order to generate a Special Council? Therefore, the Special Council was established based on an illegal act? Really, does everybody know what that means?

✔
Is everybody believing what is going on. James Comey can’t define what a leak is. He illegally leaked CLASSIFIED INFORMATION but doesn’t understand what he did or how serious it is. He lied all over the place to cover it up. He’s either very sick or very

6:26 AM - Apr 27, 2018
Wow, what a tough sentence for Paul Manafort, who has represented Ronald Reagan, Bob Dole and many other top political people and campaigns. Didn’t know Manafort was the head of the Mob. What about Comey and Crooked Hillary and all of the others? Very unfair!
1:41 PM - Jun 15, 2018

Tweets about Sessions (and McCab
This is the tweet of the day after Trump's puppets in the senate decided they were going to bring articles of Impeachment to Mr. Mueller's boss, Rod Rossestein, which is something monleys do at the circus. It measn nothing it wont succeed and it only brings a few laughs

✔
While the absurd threat to impeach Rod Rosenstein will undoubtedly fail, using the Department of Justice as a prop for political theater does lasting damage to this vital democratic institution. The men and women of DOJ and the people of our country deserve better.


NPR as the Source
Over 5Million Reads Adam Gonzalez at July 27, 2018 No comments: Links to this post