Previous on Adamfoxie Blog {Heavy, Thick, Black Gay Men in Love. The Points these postings are making, apply to blacks but also to those that are tossed to the side as if they were bad weeds. Adam

Benoit Denizet-Lewis is an associate professor at Emerson College and a contributing writer to The New York Times Magazine. He is at work on a book about people who experience radical changes to their identities and belief systems.
HOW WE FIGHT FOR OUR LIVESBy Saeed Jones

Over 5Million Reads Adam Gonzalez at October 09, 2019 No comments: Links to this post

Email ThisBlogThis!Share to TwitterShare to FacebookShare to Pinterest
Labels: Gay and Black

'Heavy, Thick Black and Gay Men in Love and We Want The World To Know'

By Gwen Aviles
NBC
Just a few days ago, Tyler Hightower had only 40 Twitter followers. Now, he said his Apple Watch won't stop buzzing to alert him about replies people are leaving to a photo of him and his boyfriend sharing a kiss.
“Posting this because of representation matters. The black, gay, and happy world is out here!” Hightower wrote in an Oct. 1 tweet that has since gone viral. “We live together and have two cats. … We are at our 1 year and 8th-month mark and still going strong!”
Hightower, a cancer research coordinator, and his boyfriend, Ahdeem Tinsley, a construction manager, met about two years ago through a dating app. They started off as friends who would chat over drinks, but at some point, Hightower, 26, realized he wanted more.
“I realized this was insane: This was someone I couldn’t get enough of and who understood me on so many levels, and I didn’t want to wait any longer,” he told NBC News. “I said to him, 'You and I are dating.'”
The couple moved in together with their cats, Buddy and Gigi, in Philadelphia. On their anniversary — the night the viral picture was taken — they got matching tattoos on their forearms with each other’s initials and the date. After seeing another black gay couple post a picture on Twitter, Hightower realized the salience of representation and decided to post one of his own. In just two days, the tweeted photo garnered more than 100,000 likes, 12,000 retweets, and countless comments.
“The responses have been awe-inspiring,” Hightower said. “People are replying saying that the picture made their day and that they didn’t know there was love for people like them.”
In the LGBTQ community, according to Hightower, “classically attractive white gay men” receive the most representation, which excludes others who may not fit that paradigm. As a result, he wanted to show others that people like him and his partner are “out here, working and living and falling in love.”
“Part of our identity is being fat, heavy, thick, black and gay men, and we want all people to know that no matter your size, color or religion, be yourself and live authentically, and you will find love,” Hightower said. “I’d been closeted for a very long time, and now I’ve found true happiness.”
Over 5Million Reads Adam Gonzalez at October 05, 2019 2 comments: Links to this post 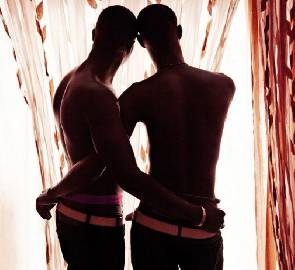 By Tim Fitzsimons( reports on LGBTQ news for NBC Out.)
NBCNews
Young black men who have sex with men (MSM) face a disproportionate risk of acquiring HIV because of “dense sexual networks” and other structural factors, not high-risk sexual activities, according to a new study conducted by Northwestern University.
The study, which was recently published in the Journal of Acquired Immunodeficiency Syndromes, surveyed MSM in Chicago and found young black MSM in the city are 16 times more likely to have HIV than their white counterparts, despite lower numbers of sexual partners, less unsafe sex and more frequent testing for HIV.
“Our study illuminates how HIV disparities emerge from complex social and sexual networks and inequalities in access to medical care for those who are HIV positive,” said senior study author Brian Mustanski, a professor at Northwestern’s Feinberg School of Medicine and director of its Institute for Sexual and Gender Minority Health and Wellbeing.
“Their social and sexual networks are more dense and interconnected, which from an infectious disease standpoint makes infections transmitted more efficiently through the group,” Mustanski said in a statement shared with NBC News. “That, coupled with the higher HIV prevalence in the population, means any sexual act has a higher chance of HIV transmission.” Other factors that researchers probed were stigma, victimization, traumatic experiences and sexual abuse. Young black MSM reported the highest rates of these risk factors, which, according to study co-author Michael Newcomb, contribute to the “difficulty in establishing viral suppression.”
Young black MSM, according to Newcomb, were also found to be the “most likely to have sex with people of their own race.” This, he added, means “it takes HIV less time to travel around that network, particularly if prevalence is already higher and viral suppression is already lower.” He also noted that there is stark racial and geographical segregation between white and black men who have sex with them in Chicago, which is a contributing factor.
While he Northwestern study looked specifically at Chicago, Mustanski said the higher incidence of HIV among young black MSM can be extrapolated in varying degrees to other parts of the country.
“National data also shows big differences in the rate of HIV diagnosis between black and white young gay men. There are large differences consistently found across different parts of the U.S.,” he explained. “In some cities, it’s three to five times higher; in other cities it’s as much as 20 times higher.”
Mustanski said the difference is particularly pronounced in the South, which is most impacted by new HIV diagnoses. “There is a history of large racial disparities in the South in terms of access to health care, poverty and education,” he said. In 2016, the Centers for Disease Control and Prevention announced that, if trends were to continue, half of all black gay men will acquire HIV in their lifetimes. But some places, like New York City, have made an impact on HIV incidence in black and Latino MSM populations, even while other places have seen disparities worsen.
Newcomb said this new study finally provides data to support what had up to this point been a widely held hypothesis: that the dense, segregated sexual networks of young black men who have sex with men are the main drivers of their higher HIV rates.
Ethan Morgan, a postdoctoral fellow at Northwestern’s Institute of Sexual and Gender Minority Health and Wellbeing and another of the study’s authors, said by learning more about young black MSM social networks, “we can better understand what drives such persistent racial disparities in HIV — and close that gap.”
Phill Wilson, president, and CEO of the Black AIDS Institute said he was not surprised by the study’s findings.
“If I am a black gay man and primarily sexually active with other black gay men, that fact alone puts me at higher risk,” Wilson explained. “If I am a white gay man, and I usually protect myself, and in the heat of a night I have an experience, my price for that experience is not the same as the price is if I am a young black gay man.” Because of “dense sexual networks,” which were pointed out in the Northwestern study, Wilson said a gay black man who “has one slip” by having unprotected sex with another gay black man has a higher chance of a “lifelong diagnosis, and then furthermore, he’s demonized.”
“You have folks who don't have as much information about things like TasP or PrEP or PEP, or even behavioral interventions,” he said, referencing new prevention methods that use HIV medications to eliminate the risk of HIV transmission.
“To be completely honest, the messenger matters, and there’s an infrastructure within black MSM communities,” said Wilson. “We are not going to solve the problem among this population unless and until institutions that are about, and by, and for them are properly, sufficiently supported with the infrastructure they need to succeed.”
Wilson pointed to proactive efforts by African-American community organizations like his own as a solution. Since opening a PrEP clinic, the Black AIDS Institute has increased the number PrEP-using black gay men in Los Angeles County by 50 percent, he said.
Over 5Million Reads Adam Gonzalez at December 13, 2018 No comments: Links to this post


Follow New York Times Books on Facebook and Twitter, A version of this article appears in print on
Aug. 12, 2018, on Page 14 of the Sunday Book Review
Over 5Million Reads Adam Gonzalez at August 10, 2018 No comments: Links to this post