The image depicting the slow-moving, otherworldly Mola mola, or sunfish, was captured off San Diego by Daniel Botelho, and it became an instant hit after being posted last week on his Facebook page.
‘It got 1,000 'likes' in 36 hours,’  Botelho, an award-winning photojournalist who specializes in underwater photography, told GrindTV. 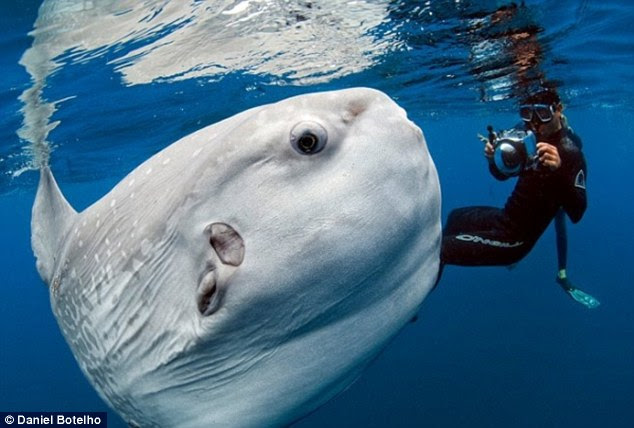 Close encounter: Photojournalist Daniel Botelho came across the moon-shaped Mola mola while snapping pictures of blue whales off San Diego
By Wednesday, the number of ‘likes’ and shares had grown to 3,068 and 2,387, respectively.
Botelho explained that he stumbled upon the mola in July of 2010 while on a mission to photograph blue whales. But the rare shot was somehow misplaced in a folder of non-used images, and he forgot all about it.

What are the Mola mola?

Sunfish, or Mola mola, are the heaviest of all the bony fish, with large specimens reaching 14 feet (4.2 meters) vertically and 10 feet (3.1 meters) horizontally and weighing nearly 5,000 pounds (2,268 kilograms). Sharks and rays can be heavier, but they're cartilaginous fish.
Sunfish develop their truncated, bullet-like shape because the back fin which they are born with simply never grows. Instead, it folds into itself as the enormous creature matures, creating a rounded rudder called a clavus.
Mola in Latin means 'millstone' and describes the ocean sunfish’s somewhat circular shape. They are a silvery color and have a rough skin texture.
Mola are found in temperate and tropical oceans around the world. They are frequently seen basking in the sun near the surface and are often mistaken for sharks when their huge dorsal fins emerge above the water.
Their teeth are fused into a beak-like structure, and they are unable to fully close their relatively small mouths.
source: NationalGeographic.com

Over 5Million Reads Adam Gonzalez at August 03, 2012 No comments: Links to this post