The Salvation Army Record on LGBT Causes...Let's make it Easy}} Always Took The Side of The Haters 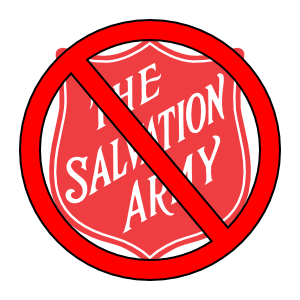 Writer Zinnia Jones compiled a timeline of the Salvation Army’s history of discrimination against LGBTQ people, both passively and actively. A few highlights:

In 2004, the Salvation Army in New York City also threatened to close down all of its services for the city’s homeless due to a similar non-discrimination ordinance.

2000 — The Salvation Army of Scotland submitted a letter to Parliament opposing the repeal of Section 28, a law prohibiting “the teaching in any maintained school of the acceptability of homosexuality as a pretended family relationship”. Colonel John Flett, the church’s Scotland Secretary, wrote:

We can easily envisage a situation where, due to the active promotion of homosexuality in schools, children will grow up feeling alienated if they fail to conform.
The Salvation Army of Scotland has never retracted or apologized for its suggestion that homosexuality would be promoted in schools or that children would be encouraged to become gay.

2001 — The Salvation Army of the United States attempted to make a deal with the Bush administration ensuring that religious charities receiving federal funding would be exempt from any local ordinances banning anti-gay discrimination. Church spokesman David A. Fuscus explained that the group did not want to extend medical benefits to same-sex partners of its employees.

The deal fell through after it was publicized by the Washington Post.

2012 — The Salvation Army of Burlington, Vermont allegedly fired caseworker Danielle Morantez immediately after discovering she was bisexual. The church’s employee handbook reads, in part, “The Salvation Army does reserve the right to make employment decisions on the basis of an employee’s conduct or behavior that is incompatible with the principles of The Salvation Army.”

A relationship between same-sex individuals is a personal choice that people have the right to make. But from a church viewpoint, we see that going against the will of God.
2013 — The Salvation Army continues to remove links from its website to religious ministries providing so-called “ex-gay” conversion therapy, such as Harvest USA and Pure Life Ministries. These links were previously provided as resources under the Salvation Army’s section on dealing with “sexual addictions.”

“Without discrimination” — myth or fact? The Salvation Army has recently attempted to counter this perception of the church as homophobic, scrubbing explicitly anti-gay statements from its websites and issuing missives purportedly “debunking” the “myth” of its anti-LGBT stances.

Yet these efforts at cleaning up their image still fail to address the most substantial criticisms of the church’s policies. The Salvation Army states that numerous clients at its soup kitchens and homeless shelters are members of the LGBT community and that these individuals are served without discrimination. They further add: “The Salvation Army embraces employees of many different faiths and orientations and abides by all applicable anti-discrimination laws in its hiring.”

These statements completely ignore the reality that the Salvation Army continues to maintain anti-gay theological stances, and continues to discriminate against its own employees and their partners. They also neglect to mention that the organization historically “abides” by anti-discrimination laws by way of shutting down services in areas where such laws apply. The Salvation Army has given no indication that it intends to change any of these anti-LGBT policies.

Supporting the Salvation Army this season, whether by tossing your change in their red kettles or donating your used goods to their resale shops, means assisting an aggressively anti-gay church in furthering its goals of discrimination. Would-be donors should consider whether “doing the most good” might mean supporting one of the many other effective and reputable charities that provide for the needy without engaging in anti-gay beliefs, policies, or political activities.

This piece was originally posted on NoRedKettles.com.

If you have fought a community of people based on something that many don't nor understand and of those that know I am sure The should know the answers and one of the things An Army that Saves People is to to be fair not side with the one giving you the biggest donation. For a long time, this org has been a mouthpiece through not just their words but the complete ignorance and head in the sand in this subject for the extreme Evangelicals that can't stand Gays. The comments that Jesus made about gays should tell you: Jesus Christ comments (0). That should end any controversy but it doesn't not because love is less powerful than hatred but at times"those voices reach heaven."The power of the hatred that is. While the opposite side stays silent. No More!!
Adam

Over 5.6 Million Reads Adam Gonzalez at December 18, 2019 No comments: Links to this post