Hong Kong Most Stop Looking to China on Gay Rights 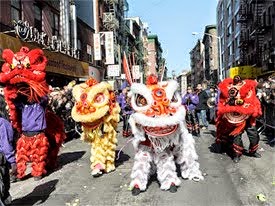 What do singer Denise Ho Wan-sze, lawmaker Raymond Chan Chi-chuen and real-estate businesswoman Gigi Chao all have in common? They are all gay, and if they were teachers, they would not be allowed to work at International Christian School.
The Sha Tin school was slammed this month when it emerged that it requires its teachers to sign a morality contract that bans same-sex relationships, couples living together outside of marriage and adultery.
The contract goes against the Hong Kong government's employment guidelines, but is not illegal, highlighting the weak legal protections afforded to lesbian, gay, bisexual, and transgender (LGBT) people in Hong Kong.
The Equal Opportunities Commission wrote to the school and vowed to investigate, but has not received a response. The school has declined to comment throughout the backlash.
The controversy has highlighted a reticence by the Hong Kong government to act over gay rights.
In November 2012, the Legislative Council voted down a motion to consult the public over whether gay-rights legislation should be introduced. As recently as 1991, homosexuality among men was a crime with a maximum sentence of life imprisonment. It was never outlawed for women.
Yet other countries, even those where Christianity is the dominant religion, are showing increasing tolerance by legalising gay marriage.
Yesterday, a law legalising same-sex marriage came into force across England and Wales.
Even more tellingly, the Archbishop of Canterbury, Justin Welby, said the Church of England would accept the law.
Last year, the Catholic Church, historically one of the most critical voices on gay marriage, suggested it too could be open to changing its stance. When asked about gay priests, Pope Francis replied: "If someone is gay and he searches for the Lord and has good will, who am I to judge?"
Yet in Hong Kong, the conversation has stalled. It does not recognise same-sex marriages or civil unions, even those legitimised overseas.
It took a celebrity like Chao, whose father offered up a fortune to any man who could win her hand in marriage, to bring the issue into the public consciousness.
Other than a handful of famous faces, LGBT people complain of not being viewed as real human beings. Instead, they're caricatured in movies or simply viewed as oddities, with a "don't ask, don't tell" mindset.
A growing number of suicides and attacks on LGBT youth in the US has spurred the It Gets Better campaign in that country.
Yet the relative safety of Hong Kong, combined with the Asian tendency to mind one's own business, means LGBT rights and concerns are swept under the rug.
LGBT people in this city may never have to fear violence like their peers elsewhere. But unfortunately, that also means the issue doesn't get the public attention it deserves. And it doesn't mean that they don't experience marginalisation on a daily basis.
Let’s hope that it doesn't take a wave of violence against LGBT people to get this city talking.
scmp.com
The author is an alumna of International Christian School
This article appeared in the South China Morning Post print edition as It's time to stop looking the other way about gay rights
Over 5.6 Million Reads Adam Gonzalez at March 30, 2014 No comments: Links to this post 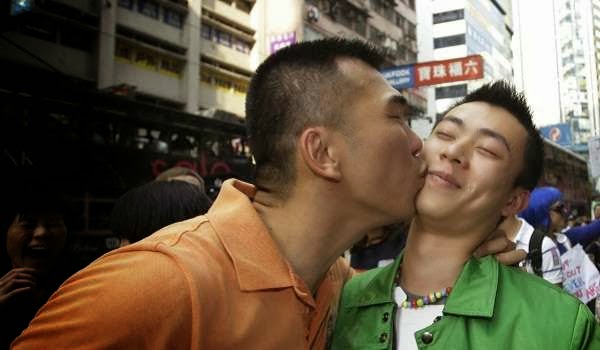 In a recent column for the Apple Daily newspaper, the woman often called Asia's most famous lesbian listed her rules for living a fulfilling life: spend time outdoors, do charity work and be true to oneself.
Gigi Chao, a Hong Kong socialite, grabbed international headlines last month when she published a letter to her multi-billionaire father asserting her sexuality and asking him to accept her spouse, Sean.
This was after property tycoon Cecil Chao, a never-married playboy who has boasted of bedding 10,000 women, offered more than $100m (£60m) to any man who could successfully woo and marry his daughter.
"Of course I can find a man and have 2.4 children and appear to have the perfect life, but it's just not an option," Ms Chao said from her penthouse office in the Hong Kong neighbourhood of Wanchai.
“There is paparazzi everywhere, and why would I want to live the life of a lie?”\ 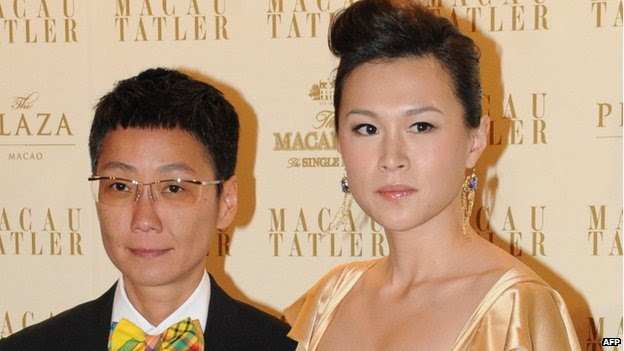 Gigi Chao (R) wrote a letter to her tycoon father urging him to accept her sexuality and her spouse, Sean (L)
The family saga of a wealthy father, his determined daughter and an enormous dowry has attracted interest from around the world.
It has also drawn attention to the lack of legal protection for sexual minorities in Hong Kong, an outwardly modern and cosmopolitan city.
Ms Chao says her money and celebrity have shielded her from the sort of discrimination often experienced by sexual minorities in this deeply conservative society.

She holds a top job at her family's publicly listed property firm and regularly receives invitations to walk the red carpet at posh events along with her partner.
That she is now an internationally known lesbian has hardly changed her life.
Her "coming out" story, while unusually public, is in marked contrast to that of Angel Tsang, a 27 year-old transsexual woman.
Born male, Ms Tsang paid little attention to her gender identity until five years ago, when she happened to see a full-length red and black dress in a store window.
She bought the dress and began wearing women's clothing in the privacy of her own room, as she was then living with her mother and sister.
Within a few months, she decided she wanted to live fully as a woman.
When she confessed the plan to her mother, she was given a choice: remain a man and live at home, or become a woman and be cast out. Then 22, she chose the latter.
Ms Tsang says she lost a steady job as an assistant in a hair salon because the boss was uncomfortable with her gender identity. 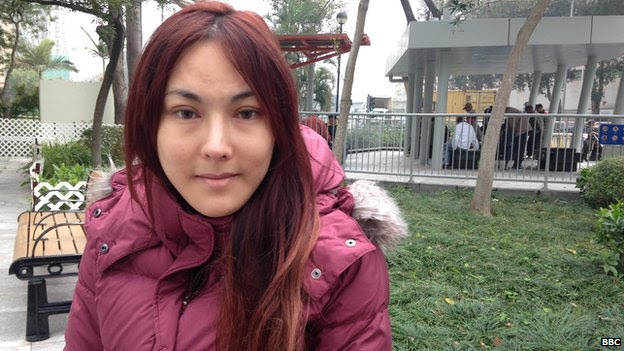 Ms Tsang had a choice: remain a man and stay, or become a woman and go

I am told Father has rescinded the offer - So please tell everyone there is no more money to be had, on my hand, or my head or my heart”

Gigi Chao
Jobless and penniless, she was homeless for a time.
"My ID didn't match my appearance, so the bosses wouldn't hire me," she says, sitting in a suburban park where she once slept. "To me, this was discrimination, but to them, it wasn't."
Job interviews that seemed promising ended in rejection because she was always asked to show her government identification, which clearly stated she was a man.
Desperate to support herself and to afford the facial plastic surgery that would allow society to fully accept her as a woman, she became a sex worker, servicing men who admired transgender women.
"I was very lonely and helpless," she recalls. "It was a bad time in my life."
Eventually, Ms Tsang found help from Rainbow of Hong Kong, a non-profit organisation that helps sexual minorities.
Legal change

The group helped her find public housing and gave her new direction as a political activist.
Last September, she had sexual re-assignment surgery. And in December, she finished another round of facial surgery that gave her the chiselled features of a movie star.
"I didn't have the surgery for myself. I had no problem with the way I used to look. But, for society to accept me, I have to be more feminine than a natural-born woman," she explains.
This week, Ms Tsang and her colleagues from Rainbow addressed Hong Kong lawmakers at the Legislative Council.
Tommy Jai, a spokesman for the group, urged them to expand existing anti-discrimination legislation to protect sexual minorities.
During his testimony, he held up a photograph of a young lesbian woman who reportedly killed herself last year because she was tired of being mistreated due to her sexual orientation. 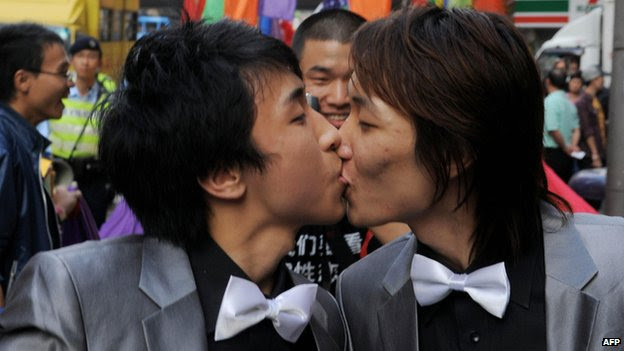 Discrimination on the basis of sexuality is not banned in Hong Kong
Homosexuality was de-criminalised in Hong Kong in 1991.
Five years later, the Equal Opportunity Commission was set up to carry out anti-discrimination legislation.
A public consultation in 1996 found strong opposition to laws protecting sexual minorities, so they were not included in the new ordinance.
Under Hong Kong's current laws, it is illegal to discriminate against someone on the basis of gender, family status, ethnicity or disability, but not sexual orientation or identity.
York Chow, head of the Equal Opportunity Commission, said he hoped the government would carry out another public survey in a year or so.
"We have a very strong position on non-discrimination against sexual minorities. We think this is something that needs to be addressed. And appropriate law needs to be introduced," he says.
Dr Chow believes social trends are changing and the younger generation is far more supportive of alternative lifestyles.
And as for Gigi Chao and her father, they still see each other regularly but have agreed to disagree.
She says: "I am told Father has rescinded the offer. So please tell everyone there is no more money to be had, on my hand, or my head or my heart!"
http://www.bbc.co.uk/n

By Juliana Liu
Over 5.6 Million Reads Adam Gonzalez at February 21, 2014 No comments: Links to this post