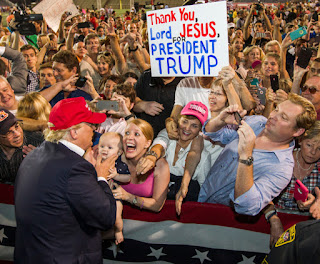 [Kansas City, a peaceful City; Except when Trump got here]

This City earned a reputation for mellowness after 800,000 people turned out in early November to celebrate the Royals’ World Series win — and local police made just three arrests.

Still, outside a Donald Trump rally here on Saturday night, four people were arrested and police used pepper spray twice on a crowd of around 200 protesters outside the historic theater where he was speaking, just blocks away from the Big 12 Men’s Basketball Championship game.

Neither Trump supporters nor protesters at his rally here on Saturday night seemed particularly worried about the potential for violence.

"I know my city," said Melissa Shasmeen Glenn, who was calmly protesting outside the Arvest Bank Theatre at the Midland where he spoke.

A number of protesters said they felt they had to come, to express their dismay and frustration with the billionaire businessman. "I wanted to make a stand against the rhetoric Donald Trump is spreading," said Sarah Craig, an Air Force veteran. "He's the most divisive candidate we've ever had. He's not good for America."

"Donald Trump is inciting violence," said Tiffany McFadden, another protester. "He's against everyone who's not part of the 1 percent, who's not rich, white and male."

Earlier in the day, after a man tried to get on stage at a rally in Dayton, Ohio, Trump told the crowd, " These are bad, bad people, and we're going to take our country back from these people." And on NBC's "Meet the Press" on Sunday, Trump said he might pay the legal fees of the 78-year-old Trump supporter charged with assault and disorderly conduct after videos showed him sucker-punching a young African American protester at a rally in North Carolina.

Trump told moderator Chuck Todd that the man "obviously loves his country, and maybe he doesn't like seeing what's happening to the country."

In Kansas City, several dozen protesters infiltrated the audience inside the Midland where they interrupted Trump's remarks at least 10 times. A  family from Lee's Summit, Mo., said three people sitting in the row behind them stood up during the candidate's speech and held up anti-Trump signs.

"They looked normal," said Rob Steinbeck, adding that he'd talked with them earlier to make sure he wasn't blocking their view.

Steinbeck was convinced that someone must have been paying the protesters, and that they must be from somewhere else, and noted that he'd seen a van with Illinois license plates covered with anti-Trump slogans.

Before Trump took the stage, the audience of around 2,000 was advised not to touch or interact with any protesters who might be present but to start chanting, "Trump, Trump, Trump" and wait for police or Secret Service agents to escort them out.

"Where are these people coming from?" asked the candidate, who blamed Bernie Sanders supporters, alleging that they were holding professionally made signs in support of the Democratic candidate. He's "a lousy senator" who "didn't do a damned thing" in the Senate, Trump said.

He called the protesters "disrupters" and as  the interruptions continued, became more and more visibly frustrated: "I hope they arrest these people. From now on I'm filing charges."

Trump praised the Secret Service agents for their quick response earlier in Dayton, Ohio, and claimed that the man who'd charged the stage there "could" be linked to ISIS, though he didn't say that was the case.

Then he went back to explaining his support of the torture known as waterboarding, and he pleaded with people to vote Tuesday in Missouri's primary.

By the time the rally ended, the crowd of protesters outside had gotten much younger and  angrier than earlier protesters. "F--- Trump is what I want to say," said one.

Andres Herrera and Kevin Bailey of the Progressive Youth Organization said their group had instigated the Facebook event "Trump Out of KC!" and had hoped to get the candidate to cancel his rally, as he had in Chicago on Friday.

But that didn't happen, and about an hour after the rally ended, the crowd began to disperse.

Beau Brayfield, who said he works full-time in IT and also goes to school, said he had been among the protesters pepper sprayed, "but it wasn't too bad." He was carrying a couple of garbage bags, looking for a dumpster.

Yes, he and other protesters had picked up the drink cups and other garbage left behind on the sidewalk.

"The cops thanked us for picking up the trash," he said.

Rollcall.com
Over 5.6 Million Reads Adam Gonzalez at March 14, 2016 No comments: Links to this post

KANSAS CITY, Kan. (KSNT) – A federal district court judge says the state of Kansas cannot stop a Johnson County district court  judge from issuing marriage licenses to same-sex couples.
U.S. District Judge Daniel Crabtree issued a preliminary injunction barring the state from enforcing its constitutional ban as of 5 p.m. next Tuesday, pending the outcome of an American Civil Liberties Union lawsuit challenging it.
The American Civil Liberties Union sued to overturn Kansas’ ban after the U.S. Supreme Court refused to hear appeals from five states seeking to save their gay marriage bans. Among them were Oklahoma and Utah, which are in the same appeals court circuit as Kansas.
The ACLU says denying the couples it is representing the right to marry, even for a short period, would do them irreparable harm.s denying the couples it is representing the right to marry, even for a short period, would do them irreparable harm.
State Attorney General Derek Schmidt had argued that when a Johnson County district court judge allowed same-sex marriage licenses to be issued last month that it violated a state constitutional amendment stating marriage is only between a man and a woman.
In issuing his ruling, Crabtree wrote “On one hand, ‘it is always in the public interest to prevent the violation of a party’s constitutional rights.’ On the other hand, the public interest values enforcement of democratically enacted laws. This latter value must yield though, when binding precedent shows that the laws are unconstitutional.”
In concluding, he notes “Consistent with this precedent, the Court concludes that the public interest favors protecting plaintiffs’ constitutional rights by enjoining Kansas’ plainly unconstitutional provisions.
The Williams Institute at the UCLA School of Law says the ruling affects as many as 4,009 “cohabitating same-sex couples, of whom an estimated 22% are raising nearly 1,750 children in their homes.”
Crabtree wrote that Kansas’ ban is infringing on the plaintiffs’ constitutional rights, and he seemed reluctant to delay their right to marry, even by a week. He said the 10th Circuit had already settled the substance of the constitutional challenge, but conceded that the appeals court may view the case differently than he views it.
The institute also says that more than 2,000 of those couples will marry in the first three years of licenses becoming available and will generate spending of more than $14.1 million in Kansas with an additional $1.15 million generated in sales tax revenue. It finally predicts that same-sex couples’ wedding ceremonies and celebrations is expected to create between 75 and 225 jobs in tourism and recreation for the state.
kansasfirstnews.com/
Over 5.6 Million Reads Adam Gonzalez at November 05, 2014 No comments: Links to this post