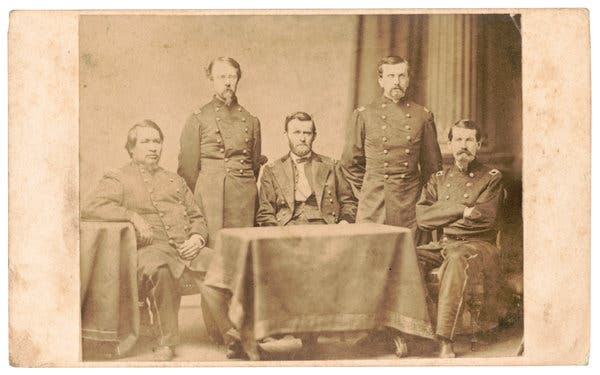 Ulysses S. Grant, center, surrounded by members of his staff during the Civil War, including Orville Babcock. As Grant’s private secretary in the White House, Babcock was implicated in the “Whiskey Ring” scandal.

Ms. O’Mara is a contributing opinion writer and professor of history.
The New York Times

For the last two weeks, diplomats have been walking through secure doors in the basement of the United States Capitol, defying the objection of their politically appointed superiors as they answer questions from members of the House impeachment inquiry.
The inquiry itself began in response to a whistle-blower who raised alarms about the administration’s efforts to pressure Ukraine for political purposes. That whistle-blower is a C.I.A. officer who seems to be, like many of those testifying, a career civil servant.
The president and his allies have responded with fury. Those damning testimonials are part of a political vendetta by “Never Trumper” bureaucrats, members of a “deep state” bent on undermining the will of the people, they assert.
But what is this “deep state”? Far from being a tool of political corruption, the Civil Service was created to be an antidote to the very kind of corruption and self-dealing that seems to plague this administration.

The question of who gets to serve in government has been a live one since the earliest days of the republic. In 1829, President Andrew Jackson, newly inaugurated, tossed out officials who had served under his predecessor and rival John Quincy Adams, filling the executive branch with Democratic Party loyalists instead. “Rotation in office” was central to Jackson’s vision of egalitarian democracy — away, he said, to transform federal service from the domain of a complacent elite into a vigorous voice of the people.

Conveniently, the practice also strengthened party power, as grateful appointees directed chunks of their government salaries as “assessments” to party coffers. “To the victor belong the spoils of the enemy,” one Jackson ally quipped. The spoils system was born.

Its flaws became clear after the Civil War as the federal government swelled in size and a rapidly industrializing economy presented irresistible opportunities for government officials to cash in. Into this perfect storm entered a Republican president, Ulysses S. Grant, a war hero with little political experience and terrible judgment in the friends he appointed to high office.

These quid pro quo schemes were only one part of what the historian Richard White calls “a zoo of corrupt practices” enabled by enormous Gilded Age wealth. Financiers and corporations, especially the railroads, filled politicians’ pockets with bribes and campaign donations, and employed friendship and fealty to bend the public sector to their will.
Although Grant himself was upstanding, self-dealing coursed through his administration. The secretary of war was charged with accepting bribes. The secretary of the interior was so thoroughly corrupt that even the once ardently pro-Grant New York Herald called him “a piece of damaged goods which General Grant ought for his own credit and good name to put at once away under the counter.” Grant’s closest aide, Orville Babcock, was indicted on charges of conspiring to defraud the government of tax money. (He was acquitted after the ever-loyal Grant testified as a character witness.)

The swamp of scandal propelled a fed-up cadre of young reformers into action. Boldest and brashest was a patrician New York State assemblyman named Theodore Roosevelt.

Government could never work properly until a professional civil service replaced cronyism, Roosevelt declared. “The spoils system of making appointments to and removals from office is so wholly and unmixedly evil, is so emphatically un-American and undemocratic, and is so potent a force for degradation in our public life that it is difficult to believe that any intelligent man of ordinary decency who has looked into the subject can be its advocate.”
A healthy dose of elitism drove Roosevelt’s crusade, as the spoils system had been the path to power for immigrant-driven political machines in big cities like New York. Yet the Civil Service laws he and others created marked the beginning of a shift toward a fairer, less corrupt public realm. By early 1883, reformers in Congress had pushed through landmark administrative reform that abolished “assessments” and instituted a merit-based system of public appointments. Roosevelt helped pass the nation’s first state-level Civil Service law in New York State later that year.
First as Civil Service commissioner and then as president, Roosevelt pushed to eradicate the spoils system. By the time he left the White House in 1909, the majority of federal jobs were merit-based career posts.
Professionalization expanded in the decades that followed. The creation of the Foreign Service established a rigorous entry examination and raised pay. The diplomatic corps was no longer limited to rich young men with time and family money to take overseas postings. The Hatch Act placed sweeping restrictions on political activity by government officials, including the president’s political appointees. Merit-based hiring diversified the workforce, making the career Civil Service outpace the private sector in the representation of women and minorities, especially in executive roles.
Even before the current moment, however, a backward slide had begun. The expertise of government specialists sank in value amid simmering anti-establishment sentiment. A Republican Party that had built the Civil Service now turned against it. As Ronald Reagan put it, “the nine most terrifying words in the English language are: I’m from the government, and I’m here to help.”
During both Democratic and Republican administrations, budget cuts stripped away professional staff from departments and regulatory agencies. Government shutdowns furloughed millions of career workers.

Margaret O’Mara is a contributing opinion writer for The New York Times and a history professor at the University of Washington in Seattle.  @margaretomara
Over 5.6 Million Reads Adam Gonzalez at October 28, 2019 No comments: Links to this post