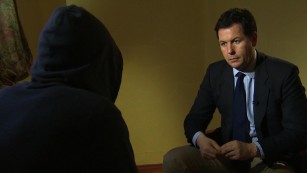 A prominent Russian reporter who revealed horrific details of a crackdown on gay men in Chechnya has told CNN she is in hiding after receiving death threats.

Elena Milashina, a journalist at the Russian-language Novaya Gazeta newspaper, said she abandoned her apartment in Moscow and plans to leave Russia altogether after Muslim clerics in Chechnya delivered a fiery sermon calling for “retribution" against her and other journalists.

"This is the first time we got that kind of threat, when 15,000 people got together in a mosque and announced jihad against all the staff of Novaya Gazeta," Milashina told CNN in an interview. “It will last forever until the last of us dies.”

Speaking to a packed mosque in the regional capital, Grozny, the clerics adopted a resolution calling for the "instigators" of the reports to be held to account. The sermon was broadcast in full on regional state television in Chechen and independently transcribed for CNN.

The editorial board of Novaya Gazeta released a statement calling the sermon "an incitement to massacre journalists." Shortly afterwards, the newspaper received two envelopes filled with white powder.

"We still don't know what the powder is. We have asked the security forces to check it," Milashina told CNN. “But all of us, including me, consider this situation is very serious."
The threats come after a series of reports first written by Milashina focusing attention on allegations of mass arrests and torture of gay men in the mainly Muslim republic of Chechnya, in southern Russia.

CNN has spoken to several victims who say they have fled the region after being detained and suffering horrifying abuses.

"They tied wires to my hands and put metal clips on my ears to electrocute me," said one victim, whose identity CNN agreed to hide for his safety.
"When they shock you, you jump high above the ground," he told CNN at an undisclosed location.
Chechen authorities have refused to acknowledge the violence, denying that there are any gay men in Chechnya.

The Kremlin says it has no confirmation of any gay men in Chechnya suffering abuse.
But the reports have clearly struck a nerve. Local Chechen television has broadcast footage of Muslim clerics condemning what they called “women's gossip" and "lies" in newspaper reports.

Threats against journalists not new

In a country where journalists are routinely beaten up or even killed for their work, the clerics’ remarks have been taken as a worrying development.

Novaya Gazeta is no stranger to violent threats against its staff. In 2006, its star Chechnya reporter, Anna Politkovskaya, was gunned down in the elevator of her Moscow apartment building.
And since 2000, at least five other Novaya Gazeta journalists have also been killed in Mafia-style hits, a grim testament to how dangerous reporting in Russia can be and the bravery of reporters like Milashina who continue to report on Chechnya.

"The only way to stop people who might possibly think of murdering my colleagues is to show them there will be another one," she told CNN.
Asked if she was prepared to put her life on the line for that ideal, Milashina replied: "Yes. Absolutely. That makes me much stronger than my enemies in Chechnya.”

CNN
Over 5Million Reads Adam Gonzalez at April 26, 2017 No comments: Links to this post 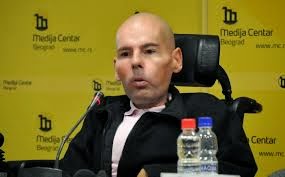 Nenad Mihailovic flouts Serbian taboo. He's openly gay in a notoriously macho culture. He uses a wheelchair in a society that shows little sympathy for the disabled. And he's a voice of liberal thinking in a nation where strong leaders have a tendency to quash dissent.
So it's perhaps surprising that Mihailovic has attracted tens of thousands of viewers to his independent talk show — in which he grills politicians, actors, pop stars and activists on such hot-button themes as gay adoption, same-sex marriages, government corruption and relations with Russia.
The program, filmed in his living room and broadcast on YouTube and local TV networks, has struck a chord in Serbia because many ordinary people feel increasingly starved of independent information and analysis, as the right-leaning government of Prime Minister Aleksandar Vucic seeks to sideline journalists who criticize his rule.
Mihailovic launched his unusual program out of revulsion over what he describes as overwhelming pro-government propaganda in Serbia's mainstream media. He turned his home into a TV studio in order to “ask the questions no one else would."
Filmed by a small camera operated by his partner, Mihailovic has so far conducted around 20 interviews with public figures and celebrities in the "hot chair." They tackle issues ranging from politics and the economy, to gay rights, euthanasia, abortion and faith.
Since launching in mid-December, Mihailovic has won praise from liberals and threats of violence from right-wing viewers. The show follows a wider trend of news-hungry audiences turning online amid reports of official censorship in the main newspapers and television stations.
"There is no longer anything to hear on any of the television networks," Mihailovic told The Associated Press. "To say that the government is stifling the media would be putting things mildly."
Late last year, Nenad Mihailovic welcomed his first guest — popular Serbian actor Nikola Djuricko. Mihailovic, wearing a tuxedo and bow tie for the occasion, asked the actor to sit in a wheelchair like him: "So, is it comfortable?" Mihailovic asked. "Oh yes, seems it's a new model," Djuricko answered with good humor.
Several shows on, he invited right-wing activist Vladan Glisic to the program, grilling him on same-sex marriage and gay child adoption. When Glisic blasted the West and urged closer ties with Moscow, Mihailovic asked him if he was driving a Western-made car.
Glisic told the AP he felt the interview was a "media ambush." He said he accepted the invitation only because he wasn't aware Mihailovic was a gay activist.
Since then, a string of politicians has appeared on the show to face Mihailovic's relentless questioning about corruption scandals. They seem to feel it shows the Serbian people that they aren't afraid of being in the line of fire. But Mihailovic said some of them do complain later: "You pushed too hard."
Like many in Serbia, Mihailovic accuses Vucic, who won a sweeping election victory last year by promising Western-style reform, of carrying out a media clampdown in the style of the late autocrat Slobodan Milosevic.
Vucic vehemently denies that his government has exerted political and economic pressure on the media. But critics have cited several incidents of alleged muzzling, such as the detention of three men for online posts criticizing the government's handling of disastrous flooding. A leading political TV host has accused Vucic of personally orchestrating the removal of her talk show from the commercial B92 television network — once a beacon of Serbia's independent journalism under Milosevic.
Draza Petrovic, a journalist at the liberal Danas daily, said authorities have been using the mainstream media to push their own agenda and sideline opponents.
Petrovic appeared on "Personal View" weeks ago: "Those were the best questions I have ever heard from a TV interviewer, and I have met quite a few," she said. "I had to think hard before answering."
Opposition politician Goran Jesic also appeared on the program. He said he wanted to show support for Mihailovic and for online journalism — which he described as the only forum for opposition views.
"Of course there is censorship in Serbia," Jesic said. "It's worse than during Milosevic."
Depending on the guest, Mihailovic's interviews have attracted from several hundred to nearly 30,000 viewers online. The show also airs on two local television stations in central Serbia. It is ignored by national networks.
Mihailovic has received a deluge of hate mail from extremists. Some of the worst came after he pressed Glisic on gay marriage and adoption.
"I would cut people like this into pieces and throw them to cats," one viewer wrote. Another message said: "Kill, slaughter gays, so they no longer exist."
Mihailovic suffers from amyotrophia spinalis progressiva II, or SMA II, a progressive nervous system disease that wastes the muscles. A life-time wheelchair user, Mihailovic, 44, could never live without help. In his youth, Mihailovic could still move his hands, and his body looked "as if I would jump up and start to walk any second." As the illness progressed, Mihailovic's body became deformed and he lost almost all ability to move.
Still, Mihailovic says he has always lived as actively as possible, fighting passionately for minority rights in Serbia. He heads an association of disabled gays, and ran at an opposition list in last year's municipal election in Belgrade. He didn't make it into the city assembly.
Journalists should break the "barrier of fear," he said: "If I, in my condition, can do the job, why can't the others who are healthy?"
And in adversity, Mihailovic can still joke about being doubly stigmatized in Serbia for being gay and disabled.
"I am double-trouble," he said, a twinkle in his eye.
seattlepi.com

Over 5Million Reads Adam Gonzalez at March 25, 2015 No comments: Links to this post