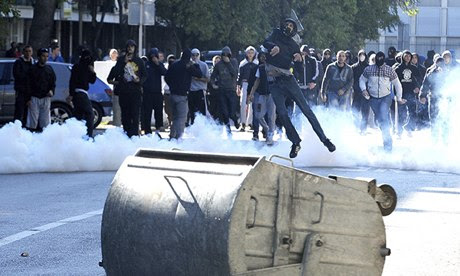 Anti-gay extremists throw stones at police trying to protect a gay pride march in Podgorica, Montenegro. Photograph: Boris Pejovic/EPA
Police in Montenegro fired teargas to repel anti-gay extremists who threw stones and firebombs at officers protecting a gay pride march on Sunday.
As many as 60 people were injured in the clashes.
The violence occurred when the attackers tried to break through police lines to reach those taking part in the march in Podgorica. After the march, the gay rights demonstrators were evacuated to a safe location in police vehicles.
Police said about 20 of the injured during the clashes were officers, and the remaining 40 were from "hooligan groups".
About 60 of the estimated 1,500 extremists who took part in the riots were arrested, police said.
The organiser of the gay pride march, Danijel Kalezic, said the police protection allowed about 150 activists to walk peacefully through the city.
"As of today, gay people are no longer invisible in Montenegro," Kalezic said. "From today, these streets are ours as well."
Such marches are seen as a test of Montenegro's commitment to human rights as it seeks to join the EU. Opponents attacked a similar march in July in the coastal town of Budva.
The Guardian
Over 5Million Reads Adam Gonzalez at October 21, 2013 No comments: Links to this post