Cutie How Big Do You Like Your Diamonds, Bigger Than Earth? 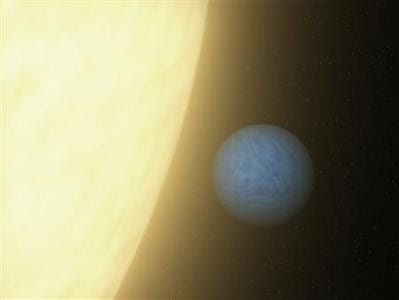 By Chris Wickham
LONDON |
Orbiting a star that is visible to the naked eye, astronomers have discovered a planet twice the size of our own made largely out of diamond. The rocky planet, called '55 Cancri e', orbits a sun-like star in the constellation of Cancer and is moving so fast that a year there lasts a mere 18 hours.Discovered by a U.S.-Franco research team, its radius is twice that of Earth's with a mass eight times greater. That would give it the same density as Earth, although previously observed diamond planets are reckoned to be a lot more dense. It is also incredibly hot, with temperatures on its surface reaching 3,900 degrees Fahrenheit (1,648 Celsius)."The surface of this planet is likely covered in graphite and diamond rather than water and granite," said Nikku Madhusudhan, the Yale researcher whose findings are due to be published in the journal Astrophysical Journal Letters.

The study - with Olivier Mousis at the Institut de Recherche en Astrophysique et Planetologie in Toulouse, France - estimates that at least a third of the planet's mass, the equivalent of about three Earth masses, could be diamond.
Diamond planets have been spotted before but this is the first time one has been seen orbiting a sun-like star and studied in such detail.
"This is our first glimpse of a rocky world with a fundamentally different chemistry from Earth," Madhusudhan said, adding that the discovery of the carbon-rich planet meant distant rocky planets could no longer be assumed to have chemical constituents, interiors, atmospheres, or biologies similar to Earth.
David Spergel, an astronomer at Princeton University, said it was relatively simple to work out the basic structure and history of a star once you know its mass and age.
"Planets are much more complex. This 'diamond-rich super-Earth' is likely just one example of the rich sets of discoveries that await us as we begin to explore planets around nearby stars."
"Nearby" is a relative concept in astronomy. Any fortune-hunter not dissuaded by "The Diamond as Big as the Ritz", F.Scott Fitzgerald's jazz age morality tale of thwarted greed, will find Cancri e about 40 light years, or 230 trillion miles, from Park Avenue.
(Editing by Andrew Osborn, Alistair Macdonald and Sandra Maler)
Over 5Million Reads Adam Gonzalez at October 11, 2012 No comments:

Email ThisBlogThis!Share to TwitterShare to FacebookShare to Pinterest
Labels: Astronomy

The Earth Has a Protector and it, is Not Religious

A massive collision rocked the gas giant's surface this week, adding to the growing body of evidence that Jupiter works as a giant space shield

In this screen shot from an amateur astronomer's video, Jupiter appears to be hit by something, resulting in a two-second explosion. Photo: YouTube
Jupiter might be a lot more than just another big body in our solar system — the massive gas giant could very well be Earth's protector. Early Monday morning, amateur astronomers captured a brief but bright flash of light on the planet's surface, which scientists now believe was the result of a massive asteroid that could've been headed our way. (See a video below.) Here's what you need to know:
What did stargazers see, exactly?
Something mysterious smashed into Jupiter's surface on Monday, resulting in a 100-mile-wide fireball that was large enough to glimpse from a backyard telescope on Earth, more than 454 million miles away. "It was a bright flash that lasted only 1.5 to 2 seconds," said Dan Peterson, the amateur astronomer from Racine, Wis., who first reported the "impact flash" in a post on CloudyNights.com. Scientists think Jupiter may have even "saved Earth from a devastating cosmic collision," says Robert T. Gonzalez at io9.
Was the asteroid really going to hit Earth?
That's hardly certain. But at the very least, this impact event suggests that the "giant planet has taken another bullet for the solar system team," says Alan Boyle at NBC News. This is the third time since 2009 that observers have seen an impact flash on Jupiter's surface, and some astronomers think the big planet's gravitational pull serves as a sort of "cosmic shield" for the inner rings of planets — including Earth — "sweeping up incoming objects that would have a deadlier effect" if they were to crash into us.
Why do scientists think Jupiter is a "cosmic shield"?It used to be believed that impacts on Jupiter's surface were "rare cosmic events," says Andrew Fazekas at National Geographic. But new evidence suggests that cataclysmic crashes are actually "fairly common," including the 1994 impact when the comet Shoemaker-Levy 9 met its doom on the planet's surface, resulting in a "spectacular explosion." A few scientists think that without Jupiter's protection, life on Earth wouldn't have been able to develop.
What's next?
Astronomers will try to figure out what caused this week's giant explosion. To do so, they'll observe Jupiter's cloud tops over the flash zone, which work as a sort of cosmic "signature" in the aftermath of impacts. If it was indeed a comet or asteroid, the atmosphere will overheat and produce soot-like debris. Only then will NASA astronomers step in for closer inspection. "Professional telescopes and Hubble are typically very oversubscribed," says NASA's Amy Simon Miller, "and won't be called into action unless a debris field is confirmed first by amateurs."
io9, National Geographic, NBC News, Space.com

Over 5Million Reads Adam Gonzalez at September 15, 2012 No comments: