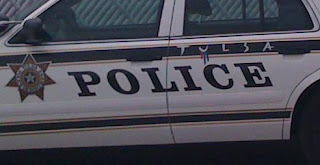 Baltimore’s streets are quiet again. Baltimore’s state’s attorney Marilyn J. Mosby moved quickly in securing indictments against six police officers in the death of Freddie Gray, and her decisive action has calmed the city for now.
But getting a grand jury to indict police officers is a lot easier than getting convictions at trial.
That’s because like any prosecutor trying to hold cops accountable, Mosby will be working on an uneven playing field.
To prove her case, she won’t just need sufficient evidence.
She will also have to overcome a number of deep-seated structural impediments to convicting police officers of crimes—no matter how guilty they are.
It’s hard to prosecute cops. There are two main reasons for this: The first is the special deference that jurors, judges, and prosecutors show officers thanks to the widespread perception that they are heroic public figures valiantly trying to protect us. The second is the bevy of special laws around the country that are designed to shield police officers from the very tactics the police regularly use on ordinary suspects.
For example, in most states, law enforcement officers cannot be questioned until they have been given a few days to get their stories straight. And many states have passed laws—such as Section 50-a of New York’s Civil Rights Law—that are specifically designed to make it almost impossible to obtain or use at trial records of a police officer’s prior brutality or misconduct.
These two factors can make convicting police officers extremely difficult, and it is no accident; it is the direct result of the sustained effort by police unions to protect officers from even the most deserved discipline or prosecution. 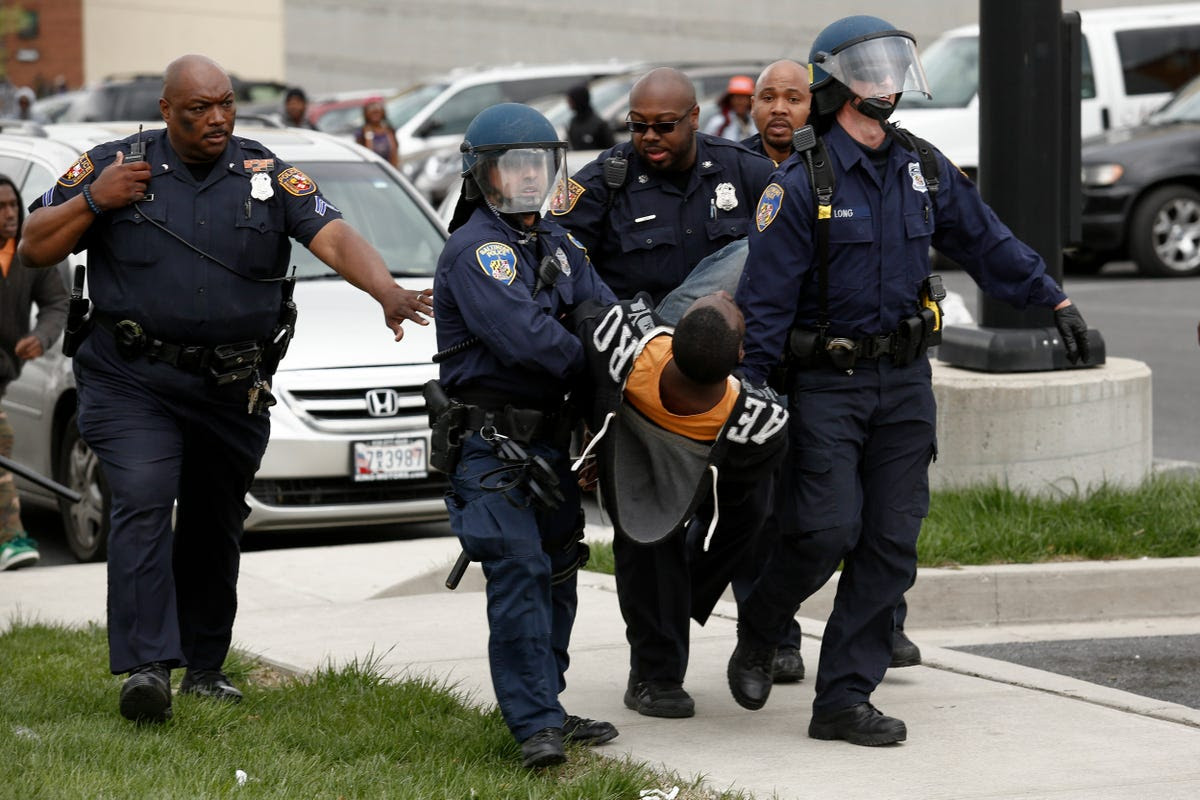 While the rules that unfairly protect the police must be changed, it is also high time to re-examine the foundation of these policies: the public perception—lovingly curated by police unions—of the very nature of police work.
For the last three decades, police unions have managed to portray their members as indispensable heroes in a deadly and dangerous war. Fallen officers, like Benjamin Deen and Liquori Tate, who were shot in Mississippi on May 9, or Brian Moore, whose funeral in New York was a few days earlier, are uniformly described as heroes. One need only listen to the fife and drums, witness the squadron of NYPD helicopters flying the missing man formation, or gaze at the image of tens of thousands of white-gloved officers standing at attention to understand the profound nature of their particular brand of heroism.
But as we read the heartrending newspaper coverage and weep at the pomp that attends a line-of-duty death, we can become a party to a false and dangerous narrative that does more to rend our society asunder than heal our legitimately broken hearts.
That’s because the story of the hero cop is also used to legitimize brutality as necessary, justify policies that favor the police, and punish anyone who dares to question police tactics or oppose the unions’ agendas. Quite simply, in the years since the Sept. 11 attacks, the story of the hero cop has become so powerful and pervasive that even questioning police behavior is decried as disloyal, un-American, and dangerous. 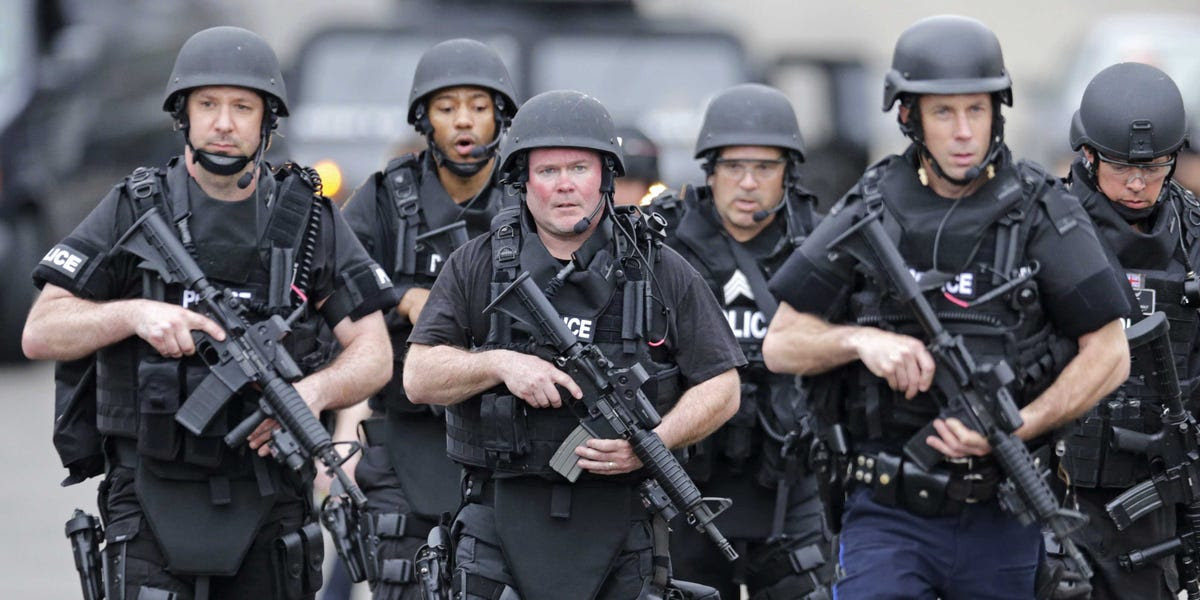 Charles KrupaA SWAT team marches through a neighborhood while searching for a suspect in the Boston Marathon bombings in Watertown, Mass.
Just last week a third-grade teacher at Forest Street Elementary School in Orange, New Jersey, was lambasted for promoting “anti-police sentiment.” Her offense: having her third-graders write get-well cards to Mumia Abu-Jamal, a man serving a life sentence for killing a police officer nearly 34 years ago. The simple display of sympathy—Jamal was recently hospitalized due to complications from diabetes—was decried by Chris Burgos, president of the State Troopers Fraternal Association of New Jersey, as “brainwashing” and promoting an “anarchy driven agenda.” Richard Costello, political director for the Philadelphia Fraternal Order of Police, described the get-well cards as “psychological child abuse.” Both unions demanded the teacher be fired, and the school district obeyed.
The hero cop narrative is also belied by the facts. According to the United States Bureau of Labor Statistics, police work does not crack the top-10 list of mostdangerous jobs. Loggers have a fatality rate 11 times higher than cops, and sanitation workers die in the line of duty at twice the rate that police do. 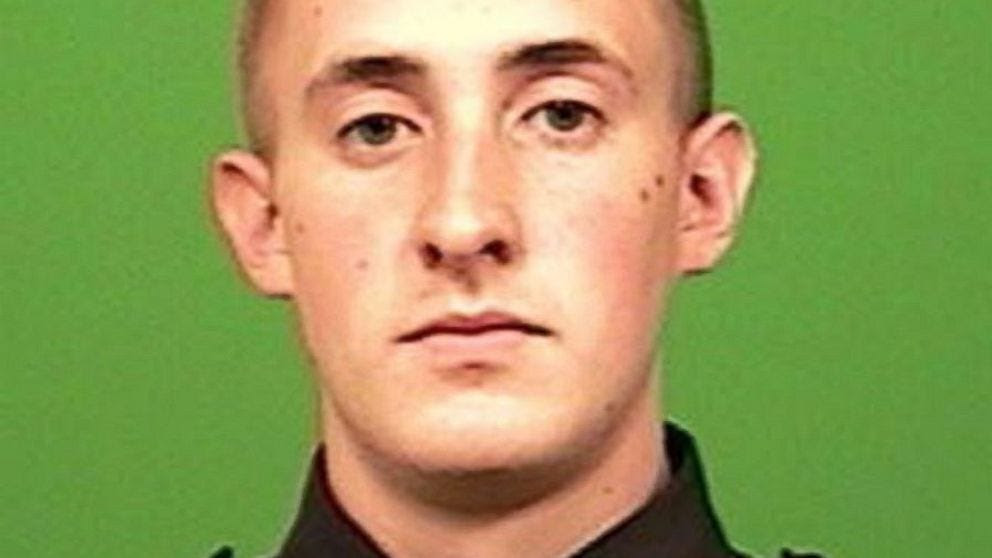 NYPD via ABC NewsNYPD officer Brian Moore, 25, died May 4, 2015 after being shot in the head by a suspect while on duty two days earlier.
Yes, police officers are sometimes shot and killed, but this is a fairly rare phenomenon.
Indeed, according to the National Law Enforcement Officers Memorial Fund, of the 100 officers killed in the United States in the line of duty in 2013, far more crashed their cars or were hit by cars than were shot or stabbed.
In fact, if you compare the murder rate among police officers with the murder rate in several American cities, you find that it is far safer to be a NYPD officer than an average black man in Baltimore or St. Louis.
Moreover, we pay our police officers handsomely in New York City. It costs taxpayers more than $8.5 billion a year to pay for the NYPD, and between salary, overtime, and the value of their benefits, the average beat cop costs the taxpayers more than $150,000 per year. That is not an argument for paying police officers less, just that we already pay these civil servants a lot more money than most people realize to do a job that is a lot less dangerous than most people imagine. 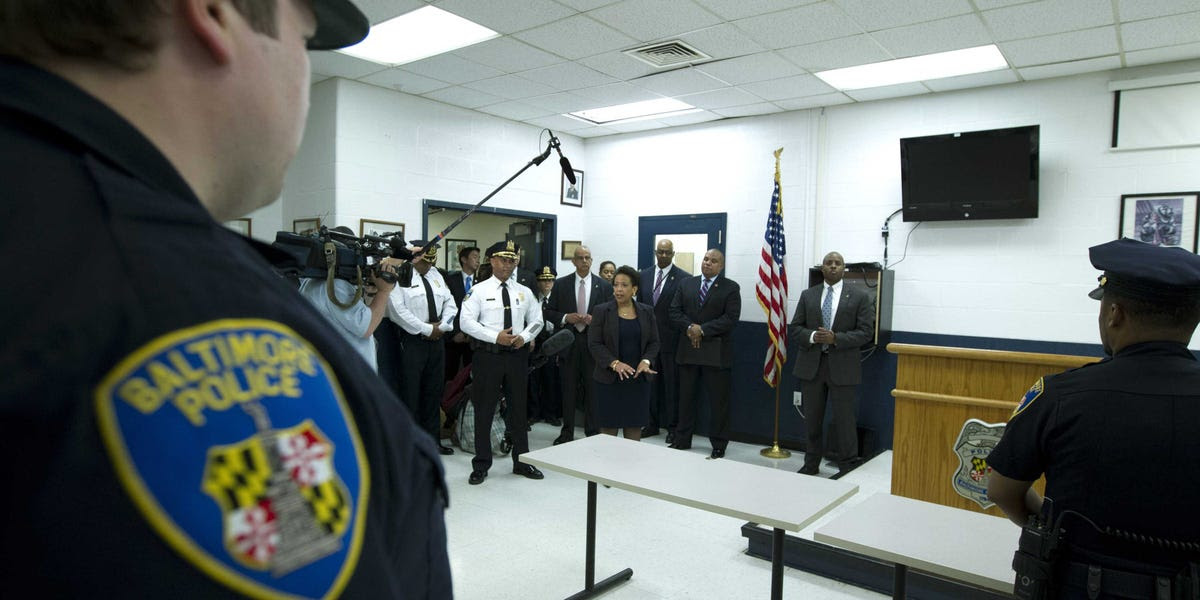 REUTERS/Jose Luis MaganaU.S. Attorney General Loretta Lynch, accompanied by Baltimore police Commissioner Anthony Batts, speaks to police officers during a visit to the Central District of Baltimore Police Department in Baltimore, Maryland, United States, May 5, 2015
We should appreciate the value and sacrifice of those who choose to serve and protect. But that appreciation should not constitute a get-out-of-jail-free card for the vast army of 800,000 people granted general arrest powers and increasingly armed with automatic weapons and armored vehicles.
There are real-world harms that follow from the myths perpetuated by police unions. Arguments about the dangerous nature of police work drive the increasing militarization of police departments. The life-and-death nature of the job is used to push for extremely generous medical leave, overtime, and pay packages. Most insidious of all, the exaggerated danger and trumped-up heroism drives an us-versus-them mentality that suffuses contemporary big-city policing and bleeds into the criminal justice system, causing systemic imbalances that chronically favor the police over citizens.
original article on Slate.
Over 5Million Reads Adam Gonzalez at May 31, 2015 No comments: Links to this post