Find out about well-kept secret getaways, the best LGBT cruises, and new exotic destinations, all at the 2012 GLBT Travel Expo Tour. The event will be arriving in Chicago, Philadelphia, and New York throughout the month of May, and travelers should make their way to the Expo and plan their next adventure with the best GLBT-friendly travel providers, agents, and cruises. Stop by and say hi to us at New York City’s LGBT Center on May 5.
Over 5Million Reads Adam Gonzalez at April 13, 2012 No comments: Links to this post

Image via airberlin
A couple weeks ago LAN unveiled their LGBT Mircro-site, and this week airberlin unveiled theirs. The new website provides gay and lesbian travelers with additional travel resources when planning their trips to Europe.airberlin.com/lgbt features information on LGBT travel to Europe and a calendar of events, providing customers with highlights about some of the most popular LGBT happenings in Europe. In celebration of the website’s launch, airberlin is giving away a free flight for two for two to either Dusseldorf or Berlin. The contest begins in March but the website is ready for travelers to start planning their trips now. Click here to go to the site.


Over 5Million Reads Adam Gonzalez at February 25, 2012 No comments: Links to this post

Email ThisBlogThis!Share to TwitterShare to FacebookShare to Pinterest
Labels: Travel

By Jen Chung in News  Gothamist.com 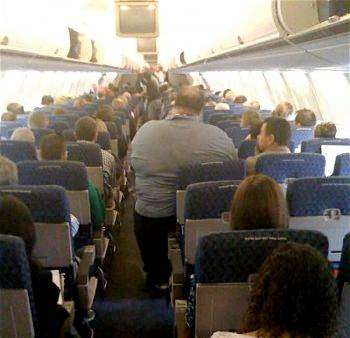 An obese passenger on an American Airlines flight in 2009
With crowded flights on the mind of many travelers this week, as well as gluttony, one airline passenger's seven-hour flight on US Airways has striking a chord: Arthur Berkowitz says he had to stand for the flight from Alaska to Philadelphia because a morbidly obese passenger made nearly impossible for him to sit in his own seat.
Berkowitz's flight was on July 29, and he went to consumer advocate Christopher Elliott after what he felt was an inadequate response from US Airways. Berkowitz says the obese passenger was apologetic upon taking the middle seat, "I'm your worst nightmare" as the armrests had to be kept up and his body covered half of Berkowitz's seat. The flight attendants were sorry but not helpful: "No other seats existed on plane. They would not permit me to sit in their jump seats, and fully acknowledged the mistake by their gate agent, in allowing this individual on plane without requiring him to purchase and occupy two seats."
Berkowitz says the situation "did not allow me to use my seatbelt during takeoff and landing"—he wedged in during those times—"as well as required me to stand in the aisle and galley area for most of the seven-hour plus flight." US Airways apologized and gave Berkowitz a $200 voucher, but he told Elliott, "The $200 is inappropriate. I paid in excess of $800 for the ticket," and thinks the airline should have required the man to buy another seat.

Many airlines are starting to charge obese passengers for a second seat if they can't buckle the seatbelt using a single seatbelt extender or are unable to put the seat's armrests down.
Over 5Million Reads Adam Gonzalez at November 25, 2011 No comments: