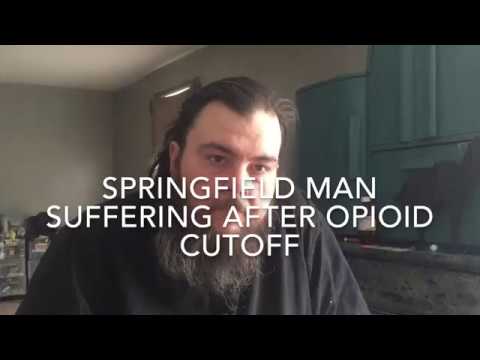 John Heubusch is a novelist and the executive director of the Ronald Reagan Presidential Foundation and Institute in Simi Valley, Calif.
We had tried everything to stop the spread of my cancer. My doctor felt it was time for me to go home, get my affairs in order and say my goodbyes. “Get your Christmas shopping done early,” he said. “You have just a few months to live.”
Five years have passed since that grim day and, strange as it might seem, there have been times I’ve regretted undergoing the last-minute medical gambles that saved my life.
I am not alone. Victims of tragic accidents, disease onset, combat wounds, complicated surgeries, workplace injuries, gun violence or even a simple fall off a ladder are among the 20 million Americans like me who experience some form of high-impact, chronic and often debilitating pain. Many, given a second chance at life after a serious illness or injury, tragically choose suicide over pain. Why? The most unfortunate among them, those with life-altering, unspeakable pain, are being denied access to the medications they need to go on. Their doctors, now numbering nearly 70 percent of our front-line physicians, have enlisted in the nation’s war on opioids. Many have turned away from their patients in chronic pain.
When you see news stories declaring that federal action is driving fewer questionable opioid prescriptions, that Purdue Pharma is in deep trouble for allegedly creating millions of OxyContin addicts, and that the United States has stepped up the fight to interdict drugs on our nation’s borders, no doubt there’s reason to applaud. Lives are being saved. The rising number of deaths since 2015 that necessitated this war on opioids is most often not the fault of doctors or their patients in chronic pain. The real blame — where the war will be won or lost — lies with the illegal trafficking of opioids on the street where you live.
The Centers for Disease Control and Prevention knew this when it trained its guns on the opioid epidemic three years ago. Revising its guidance to physicians in 2016, it sought to limit opioid treatment practices that were outside the bounds of common sense and sound public health. The CDC’s intended audience should have been small; a limited number of bad actors and a minority of doctors overprescribing for short-term pain were the CDC’s real target. But the guidelines were ambiguous and short-sighted. The immediate result: confusion at major medical conferences, inside hospital boardrooms and, most troubling, in just about every doctor’s office.
Next came the law of unintended consequences. At least 33 states, each seemingly eager to outdo the other, have passed their own measures to severely reduce or eliminate the use of such drugs to treat pain. “Just say no,” the national refrain from the 1980s in the war on crack cocaine, has become the standard of care for patients with severe pain.
Enter President Trump. His battle cry, verbatim: “Whether you are a dealer or doctor or trafficker or a manufacturer, if you break the law and illegally peddle these deadly poisons, we will find you, we will arrest you, and we will hold you accountable.”
Lumped in with drug pushers and heroin traffickers, even law-abiding doctors who have responsibly treated patients in chronic pain with opioids began to cower. Just what were these new laws? What dosages for each unique patient with a unique set of needs will keep a doctor out of prison? Administrators of major medical research institutions, teaching hospitals, national pharmacy chains and most particularly overworked private practitioners were not going to wait for answers. With visions of Drug Enforcement Administration agents in their waiting rooms, they headed for their bunkers, leaving desperate patients behind.
We have reached the point where doctors believe the next prescription they write for opioids to treat chronic pain might be their last. In my own case, I’ve had to undergo countless unsuccessful procedures and near superhuman efforts to be granted barely enough medication to try to live a normal life. Even those doctors with the courage to prescribe them for chronic pain sufferers are finding the hurdles established by federal and state reporting requirements so onerous that they are simply turning patients away.
Opioid prescriptions have shrunk substantially, but Washington’s goal now is to cut their number by a further one-third. In a bitter irony, opioid overdose deaths continue to hover at an all-time high. Many chronic pain patients, denied prescriptions, are self-medicating on the street, using synthetic drugs such as fentanyl, 50 times more powerful than heroin. There, danger and overdose lurk around every corner. Even worse, some who have lost all hope for pain relief are choosing to end their pain by ending it all. The risk of suicide among patients with chronic pain is twice that of those without it.
Three weeks ago, more than 300 medical experts wrote to the CDC noting the increase in suicides tied to the agency’s widely misapplied guidance. The patients in chronic pain they defend are not addicts. Far from it. There is a terrible truth for our government complicit in this crisis of its own making: Though it can regulate prescriptions for those in need, it cannot regulate pain.
Over 5.6 Million Reads Adam Gonzalez at April 02, 2019 No comments: Links to this post

Letizia Marsili, 52, first realised she was different when she was very young.
Pain is a body alarm system. Pain happens because somewhere in your body something went wrong and the pain will try to tell you everything is not ok and is your responsibility to find out why. As a Society we teach people to become doctors and learn where different types of pain come from and how to deal with the cause so the issue can be resolved, so the pain would go away. If the issue cannot be resolved then opiods and other drugs are used to minimized the pain that otherwise will make life not worth living. Imagine smelling something burning and when you look down is your hand burning from the heat or fire of the stove but you never got the signal of not leaving your hand where there was fire or heat. Adamfoxie*
🦊
She had a high threshold for pain, which meant she didn't feel burns or notice broken bones. Five other family members are also affected by the condition which means they are insensitive to pain.
Letizia told the BBC: "From day to day we live a very normal life, perhaps better than the rest of the population, because we very rarely get unwell and we hardly feel any pain.
"However, in truth, we do feel pain, the perception of pain, but this only lasts for a few seconds."
Scientists believe the condition could be down to some nerves not reacting properly.
Researchers who studied the family hope their discovery of a gene mutation in family members could help chronic-pain sufferers in the future.
"We have opened up a whole new route to drug discovery for pain relief," said Prof Anna Maria Aloisi from the University of Siena in Italy.

How is the family affected?

Letizia's mother, two sons, sister and niece all show signs of being affected by the syndrome that is named after the family - Marsili pain syndrome.
She said pain was an important alarm signal and because they feel it only fleetingly, the family often have fractures that go undetected and this leads to inflammation in their bones.
They also experience burns and other injuries without knowing.
Letizia said her 24-year-old son Ludovico, who plays football, has encountered problems.
"He rarely stays on the ground, even when he is knocked down. However, he has fragility at the ankles and he often suffers distortions, which are micro fractures.
"In fact, recently X-rays have shown that he has lots of micro fractures in both ankles."
She said her younger son Bernardo, 21, had a calcification of the elbow without even realising he had broken it after falling off his bike. He continued to cycle for another nine miles. Letizia says she fractured her right shoulder while skiing but continued to ski all afternoon, only going to the hospital the next morning because her fingers were tingling.
The same thing happened when she broke a bone in her elbow playing tennis.
"Because of a lack of pain, it got so stressed that it ended up breaking," she says.
But the worst thing, she says, has been problems in her mouth because of a tooth implant that went wrong.
Letizia's mother, Maria Domenica, 78, has had a number of fractures which have never healed properly and have hardened naturally. She often suffers burns because she doesn't feel any pain.
Her sister Maria Elena often damages the top of her mouth because she burns herself with hot drinks, and her daughter Virginia once left her hand in ice for about 20 minutes without feeling pain.
Despite all this, Letizia says she has never seen the condition "as a negative for our lives".

Why do they feel little pain?

Lead study author Dr James Cox, from University College London, said the Marsili family members had all their nerves present, but "they're just not working how they should be".
He said: "We're working to gain a better understanding of exactly why they don't feel much pain, to see if that could help us find new pain relief treatments."
The research team, whose findings are published in the journal Brain, worked with the family to find out the nature of their phenotype - the observable characteristics caused by their genetics.
The Marsili syndrome, named after them, means the affected individuals are less than normally sensitive (or hyposensitive) to extreme heat, capsaicin in chilli peppers and have experienced pain-free bone fractures.

What did scientists discover about their genes?

The researchers mapped out the protein-coding genes in each family member's genome and found a mutation in the ZFHX2 gene.
They then conducted two studies in mice which had been bred without this gene and found that their pain thresholds had been altered.
When they bred a new line of mice with the relevant mutation, they found they were notably insensitive to high temperatures.
Prof Aloisi said: "With more research to understand exactly how the mutation impacts pain sensitivity, and to see what other genes might be involved, we could identify novel targets for drug development."
The family is believed to be the only one in the world to be affected by this faulty gene.
By Ian Westbrook & Philippa RoxbyHealth reporters, BBC News
Additional reporting by Mauro Galluzzo
Over 5.6 Million Reads Adam Gonzalez at December 17, 2017 No comments: Links to this post