This story comes from Life Kit, NPR's family of podcasts for making life better — everything from finances to exercise to raising kids.
JULIA FURLAN  NPR.org
Here's the bad news: Men are hurting, and, according to many researchers, masculinity is what is hurting them and making it hard for them to maintain friendships.
Society tells men* to be stoic and to suppress their feelings and expects them to be aggressive, says Niobe Way, a developmental psychologist at New York University, but having a full range of emotions is inherently human.
The way has spent more than 30 years interviewing teen boys about masculinity and friendship. She says that in childhood, boys feel affectionate about their relationships — just as girls do.
"Children have remarkable social and emotional skills — to listen to each other, to read each other's emotions, empathy, all sorts of lovely things," she says.
But then, like clockwork, in late adolescence, boys go underground emotionally when talking about their friendships. "You get the 'I don't care anymore.' Or, 'No homo,' as if I've been asking a question about their sexuality rather than about their friendships," she says.
The good news is that those skills can be recovered! There are a lot of experts who can help, and here's what they recommend:
1. Don't blame yourself.
You are a product of a society that expects very particular things of masculinity, so focus on undoing hurtful and restricting belief systems. "Friendships are coded as not masculine; certainly emotions are coded as ... not masculine," Way says. "So if you're not supposed to be emotional that means you're not going to be able to find the intimacy."
Thomas Page McBee has thought a lot about masculinity — especially for his two books, Amateur and Man Alive. "I don't want to overstate it, but I think there's something really disturbing about how we think about masculinity as a culture," he says. In his extensive reporting, he has found a lot of codes that society expects boys and men to adhere to. "I think we need to really face that and look at it culturally and see the damage it's doing."
2. Accept your own desire for intimacy and normalize it for the people in your life.
Way recommends sharing articles about masculinity and friendship so that you can start these conversations — and, boy, are you in luck: There is a list of articles at the end of this post! Pore over them and don't forget you have the entire Internet at your fingertips, friend!
3. Model vulnerability.
Say the thing that scares you, like "I'm afraid nobody will go to my party," or "I miss my grandma every day." Doing so will make it OK for other people to follow your lead. We are all on the elevator to a society where emotional availability is normalized, and I want you to press "door open."
4. Ask more questions.
People sometimes feel they might be prying if they ask someone about themselves — especially when their friend is sharing something tough. But if you get curious in moments of vulnerability, you will open the door to all kinds of growth in your relationship. Take the opportunity to really see your friend and show them they matter by following up. But, as LeVar Burton says on Reading Rainbow, you don't have to take my word for it! Niobe Way says, "When you're with a friend or a romantic partner and they don't have questions for you, that is incredibly alienating."
5. Get close with the children in your life.
Way's research says that the No. 1 thing that helps children (especially boys) grow up to have enriching friendships is to be close with an adult relative who was not afraid to express emotions. So, if you're a parent, stepparent, or thinking about becoming one, or if you have nieces or nephews, take the opportunity to be close to them and help them grow up to be good friends, too.
Here's a little syllabus on masculinity so you can start your own research:
* For the purpose of this piece, we're using the word "men" to refer to people who identify that way and who can be saddled with the constraints of masculinity.
Over 5.6 Million Reads Adam Gonzalez at August 24, 2019 No comments: 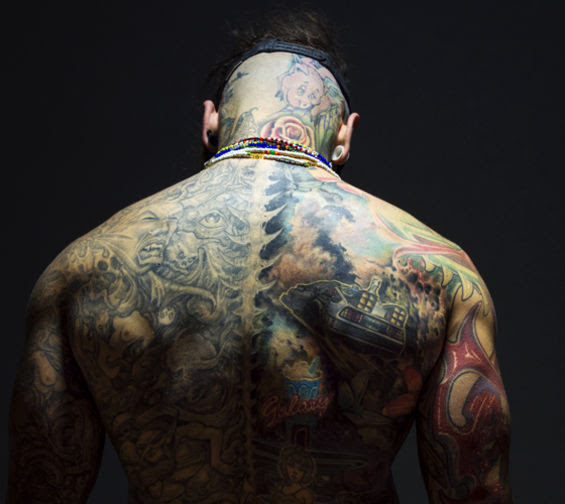 Photo by Giulio Sciorio
As a pulsating techno beat booms inside a hotel ballroom in downtown Miami, dozens of spectators watch a petite redheaded MC wearing green-and-black striped tights, a lace corset, and a fake carnival barker's mustache. "Now we have Coco!" she bellows into a mike. "The big baby!"
The crowd hoots and whistles as Coco Stabs saunters onto the stage. His bushy blond hair is pulled into tight buns, Björk-style. The blush on his cheeks softens his imposing 350-pound, six-foot-three frame. His gut hangs over white-and-green boxers, and a baby's bib covers the Sacred Heart of Jesus and eagle's wings inked on his broad chest. On his left hand, an outline of brass knuckles rises from his flesh thanks to a subdermal implant, a type of jewelry surgically placed beneath the skin. 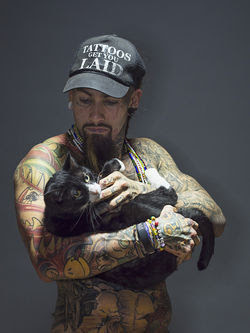 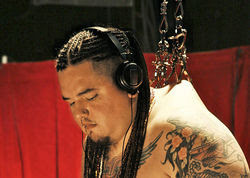 Eric Madrid
Coco Stabs has been pushing the limits of body modification since 2001.

Coco turns briefly to reveal four stainless-steel clamps pinching through the skin between his massive shoulder blades. Two friends, both heavily tattooed, grab a winch and attach it to Coco's back.

The MC shouts, "This is not your normal-size man! It will not take one, but two, people to pull this big baby up!"
Applause drowns out the house track. Coco's compatriots pull on a rope, lifting him four feet off the ground. The skin on his back stretches like saltwater taffy from the Atlantic City boardwalk. Thin streams of blood trickle from the puncture points. Coco bobs his head to the music while the MC's assistant, a pretty young woman in a pink tutu, spins him with a cane.
The performance, part of a TattooLaPalooza expo, offers a rare local glimpse into a culture that's booming in the underground around the country but remains a fringe in Miami-Dade. Suspension — hanging in the air by steel hooks implanted in flesh — is just one part of a scene that goes way beyond ink-jobs and nose rings. Adherents stretch earlobes into giant doughnut holes, pierce their backs to create skin corsets, brand their flesh, and carve out decorative scars.
Miami-Dade has long been a hotbed of tattooing culture, with its 122 parlors nearly equal to the number in Broward and West Palm combined (where 144 are registered). The hit reality showMiami Ink filmed for six years at Love Hate Tattoos in the heart of South Beach, and thousands of dollars are spent on tattoos and piercings every weekend.
But extreme body modifiers such as Coco remain part of a true underground in the Magic City. While Broward's scene has flourished by comparison — with regular suspension parties in Fort Lauderdale at clubs like the Green Room — Dade's population of kids born to conservative Latin American families often struggles for acceptance. And throughout the Sunshine State, the scene is hindered by laws against some of the bolder procedures — including subdermal implants, like Coco's brass knuckles.
"I hate it," Coco's mom, Rocio Alvear, says of her 32-year-old son's lifestyle. "His father and I have always been clean-cut and presentable. My son will never be able to get a normal job the way he looks."
Pull back the curtain, though, and Dade is full of true believers willing to risk social stigma and legal action to pursue their passion. Guys like Coco put on shows while suspended from their backs. Others, like a Hialeah native who calls himself "Daze," ink themselves from head to toe. Even more alien are deep thinkers such as Michael Alberta, a Miami Beach artist and piercer who adheres to a philosophy called "transhumanism" that preaches melding bodies with the latest technology.
Why do they pour their energy into altering their bodies in such extreme ways — especially in an image-obsessed town that mostly sees their brand of body fixation as freakish?
The answers are as varied as the tats running up and down Coco Stabs's chest.
Source