SR. Member of Japanese Government } Elderly Should just Hurry Up and Die 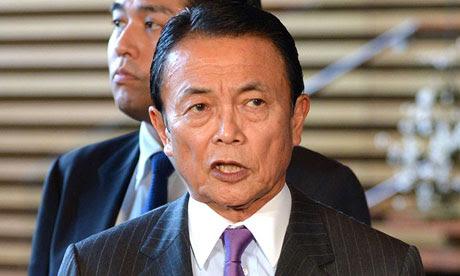 Taro Aso referred to elderly patients who are no longer able to feed themselves as 'tube people'. Photograph: Yoshikazu (Tsuno/AFP/Getty Images)

The remarks from this man who Happens to be a Japanese Sr. Minister,. Representative of the NEW Japanese government.  It is very hurtful that a modern nation as Japan is, will take that attitude. Japanese have been accused with being heartless with one track mind.  Sometimes what they say about u turns out to be true.

Look at Lance Armstrong in the USA as an opposite of that. Someone who wins regardless of who he hurts..  Both approaches to life and problems with our populations cannot  reach humanity for all, which eventually touches all.

The way we treat our seniors is the way we are going to be treated. While I read the story on this Japanese man the movie  with Robertson... my mind can not remember his first name. Im  doing this live and without spell check. Yikes!
So I’m writing  as the thoughts  come to me. The story of the movie was that when a person wanted to commit suicide or they got too old they  were killed in  front of a screen nicely showing them something they love in their past lives,  until they fell sleep and died. They needed them to die so the younger ones would have food.  No Soy beans and the people would rebel because there was nothing else to eat.


No ambulances and no funerall hones. Only garbage trucks to collect the bodies. In bring them to the slaugher houses they used to used for hamburgers and cows slaughlering.I hope this only one voice, of this Japanese gent , but I know is not. This Jaspanese man if he lost the job there, the republicans  will hire him here to give speeacjes and become a millionaire like Gingrich,

Gingrich the selling of a disarrayed mind. I’ve touched several subjects here but they are all related as to how we treat our minorities, our poor, our disabled our elderly or sick. Is it all about the banking and real estate industries with defense that makes a nation,. If its so, I don’t want to live in that country. I want a country that reflects my humanity and that has made of me a speaker on these subjects. That is why I am writing this report now .
Japan's new government is barely a month old, and already one of its most senior members has insulted tens of millions of voters by suggesting that the elderly are an unnecessary drain on the country's finances.
Taro Aso, the finance minister, said on Monday that the elderly should be allowed to "hurry up and die" to relieve pressure on the state to pay for their medical care.
"Heaven forbid if you are forced to live on when you want to die. I would wake up feeling increasingly bad knowing that [treatment] was all being paid for by the government," he said during a meeting of the national council on social security reforms. "The problem won't be solved unless you let them hurry up and die."
Aso's comments are likely to cause offence in Japan, where almost a quarter of the 128 million population is aged over 60. The proportion is forecast to rise to 40% over the next 50 years.
The remarks are also an unwelcome distraction for the new prime minister, Shinzo Abe, whose first period as Japan's leader ended with his resignation after just a year, in 2007, partly due to a string of gaffes by members of his cabinet.
Rising welfare costs, particularly for the elderly, were behind a decision last year to double consumption [sales] tax to 10% over the next three years, a move Aso's Liberal Democratic party supported.
The 72-year-old, who doubles as deputy prime minister, said he would refuse end-of-life care. "I don't need that kind of care," he said in comments quoted by local media, adding that he had written a note instructing his family to deny him life-prolonging medical treatment.
To compound the insult, he referred to elderly patients who are no longer able to feed themselves as "tube people". The health and welfare ministry, he added, was "well aware that it costs several tens of millions of yen" a month to treat a single patient in the final stages of life.
Cost aside, caring for the elderly is a major challenge for Japan's stretched social services. According to a report this week, the number of households receiving welfare, which include family members aged 65 or over, stood at more than 678,000, or about 40% of the total. The country is also tackling a rise in the number of people who die alone, most of whom are elderly. In 2010, 4.6 million elderly people lived alone, and the number who died at home soared 61% between 2003 and 2010, from 1,364 to 2,194, according to the bureau of social welfare and public health in Tokyo.
The government is planning to reduce welfare expenditure in its next budget, due to go into force this April, with details of the cuts expected within days.
Aso, who has a propensity for verbal blunders, later attempted to clarify his comments. He acknowledged his language had been "inappropriate" in a public forum and insisted he was talking only about his personal preference.
"I said what I personally believe, not what the end-of-life medical care system should be," he told reporters. "It is important that you be able spend the final days of your life peacefully."
It is not the first time Aso, one of Japan's wealthiest politicians, has questioned the state's duty towards its large elderly population. In 2008, while serving as prime minister, he described "doddering" pensioners as tax burdens who should take better care of their health.
"I see people aged 67 or 68 at class reunions who dodder around and are constantly going to the doctor," he said at a meeting of economists. "Why should I have to pay for people who just eat and drink and make no effort? I walk every day and do other things, but I'm paying more in taxes."
He had already angered the country's doctors by telling them they lacked common sense, made a joke about Alzheimer's patients, andpronounced "penniless young men" unfit for marriage.
In 2001, he said he wanted Japan to become the kind of successful country in which "the richest Jews would want to live".
He once likened an opposition party to the Nazis, praised Japan's colonial rule in Taiwan and, as foreign minister, told US diplomats they would never be trusted in Middle East peace negotiations because they have "blue eyes and blond hair".
While figures released on Monday showed a record 2.14 million Japanese were receiving welfare in October 2012, Aso has led a life of privilege few of his compatriots could hope to match.
He is the grandson of Shigeru Yoshida, an influential postwar prime minister, and is married to the daughter of another former premier.
While campaigning for the premiership in 2008, Aso refused to acknowledge the use of hundreds of allied prisoners of war by his family's coal mining business during the second world war. He served as president of the firm's successor, Aso Cement, from 1973-79.
Over 5Million Reads Adam Gonzalez at January 23, 2013 No comments: Links to this post