In Spokane They Treat Homelessness With Better Relationships

When the icy wind blows off the Spokane River, the temperature can routinely plunge below zero on this city's worn streets near downtown and the I-90 freeway. Trying to survive without shelter out here is almost impossible.
Just ask Mariah Hodges.
"The first night I came here I was almost frozen to the sidewalk," Hodges says.
By luck, Hodges was connected by a volunteer to a warming center, where she's now staying. It's one of three new makeshift emergency facilities that the city of Spokane, Wash., has paid to open up this winter, as demand for existing shelters has routinely exceeded available space.
Hodges is almost 40. She's frail and shivering.
"They got me in and they got me on a mat. They got me some extra blankets. They got me hot water," she says.
Hodges says she was evicted from her apartment and lost her job at the Motel 6. She's lucky to find space here. The center's 60 beds and 30 mats are taken every night.
Unlike other shelters, there's a lower bar for entry here. Hodges' boyfriend also stays in the shelter. He is addicted to meth, and Hodges is struggling with alcoholism.
"They're checking on me all the time. I'm like, 'Hey, you know, I want to go drink,' " she says. "And they're like, 'No, you don't. We're going to keep an eye on you. You're going to stay here today.' "
Wraparound care
What Hodges is talking about — the constant attention and support — is the kind of care that advocates for the poor say is crucial to at least help people get out of the spiral into chronic homelessness.
"Most of the people in this building should not be here. They have issues that need to be addressed at a different level," says Julia Garcia, founder of Jewels Helping Hands, a nonprofit contracted to run the warming center that Hodges is staying in. "But due to their circumstance or their behavior or whatever has gotten them to the place where they are sleeping outside, they don't know how to get out of that."
The more traditional approach to dealing with homelessness is tougher enforcement: ticketing people for panhandling or sleeping in doorways or busing them to shelters, sometimes in other cities.

But Garcia says there's a growing consensus now that a more punitive approach hasn't worked for Spokane: Washington's second-largest city of 220,000 people hasn't always seen the prosperity of coastal cities like Seattle.
Nationwide, the homeless population is rising. In many communities, it can feel like an intractable problem. Yet cities like Spokane are starting to show some incremental progress with some prevention programs. Homeless prevention leaders like Garcia say it's important to highlight these — otherwise, the general public, bombarded by so many stories about how bad the crisis is, might start thinking there are no solutions.
On any given night, it's thought that well over 1,000 people are now sleeping outside here, even when there may be help available.
"It's not more services that they need — we have access to those services. It's the relationships that aren't being built," Garcia says.
A convention for the homeless
So Spokane is trying something different. This was on display in a big way one chilly weekday morning at the city's downtown convention center.
Where you might expect to see a trade show or convention in this huge, airy hall just steps from Spokane's main tourist draw, Riverfront Park, today it's a "Homeless Connect." Hundreds of the city's most vulnerable are carrying tote bags stuffed with donated food, jackets and health, and housing brochures. Organizer Carrie Chapman says they moved the event here this year because they ran out of space at the old venue donated by the Salvation Army.
"It's an amazing thing to witness. We have absolutely every service you can think of — veterinary services, haircuts, showers, clothing," Chapman says.
But this is about more than just giving out free clothes or hepatitis C tests.
It's part of a delicate, more long-term plan to build trust in the system and convince people that if they get help, their lives might improve. 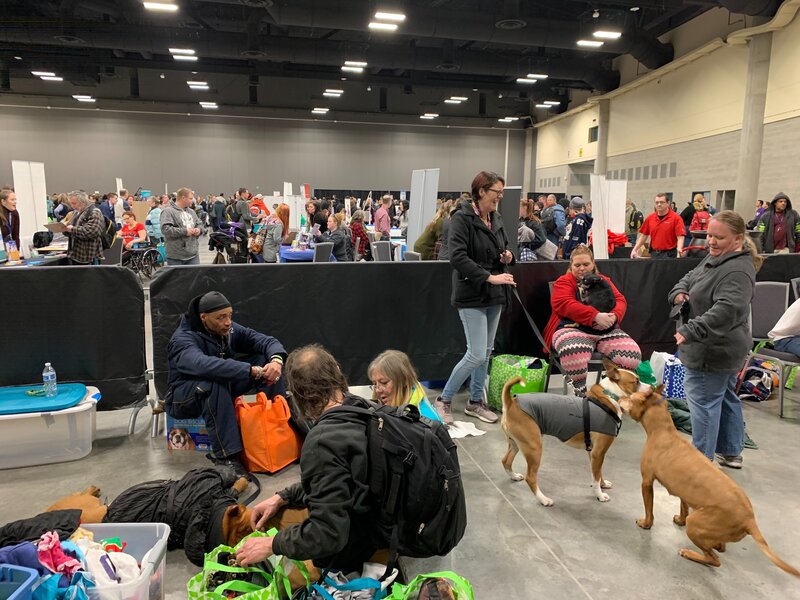 Over 5.6 Million Reads Adam Gonzalez at February 21, 2020 No comments: Links to this post