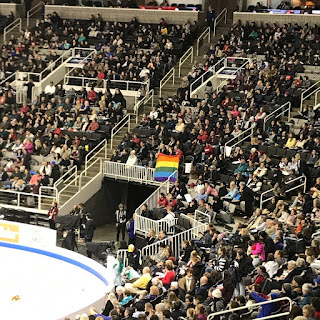 GANGNEUNG, South Korea—Ian Rodriguez realized not long before the Pyeongchang Games that he would be in Asia with his husband during the Olympics. “Let’s go,” he said. Rodriguez bought tickets, changed his travel plans and went to Amazon to buy something he wanted to pack for his last-minute trip: a gay Pride flag with stars and rainbow stripes.
Rodriguez, a 35-year-old X-ray technician from Las Vegas, brought that flag to the men’s figure-skating competition on Friday morning here and unfurled it to celebrate after the short program of Adam Rippon, the first American figure skater to compete at the Olympics while openly gay.
It was a remarkable sight: Rippon basking in the crowd’s support after the best skate of his life, even holding his hand to his ear to ask for more noise, as Rodriguez waved a flag representing gay rights in the Olympic arena.
“He’s someone who represents my country and represents me,” Rodriguez said. “I feel like our community is not represented enough, and I’m proud that he has the balls to come out and be like: I’m gay, and I’m an Olympic athlete, and here I am. He doesn’t care what anyone thinks. He’s there for our community.”
As recently as four years ago in Sochi, there were no publicly gay U.S. Olympians. There are now three: Rippon, freestyle skier Gus Kenworthy and speed-skater Brittany Bowe. Rodriguez came to Pyeongchang to cheer for them specifically. “The fact that we have three athletes in the U.S. who are out and representing the LGBT community was even more of a push,” he said. “Everyone always comes out after they win their medal. And it’s like, well, it would be great if it was during the Olympics.” 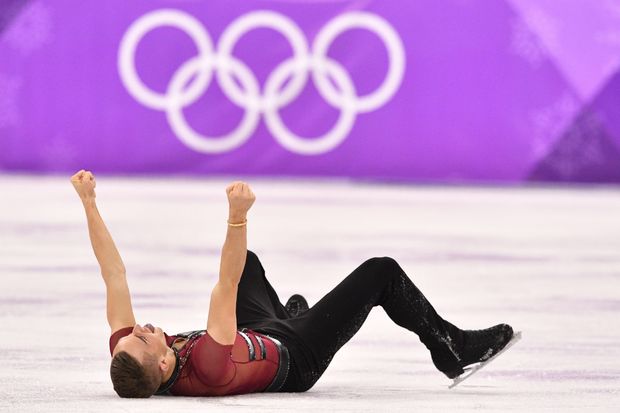 Adam Rippon reacts after competing in the short program. PHOTO: MLADEN ANTONOV/AGENCE FRANCE-PRESSE/GETTY IMAGES
Rodriguez isn’t a die-hard Olympics fan. “I don’t have everyone’s names memorized or anything like that,” he said. He barely knew who Rippon was before the Games began.
It was through following Kenworthy that he learned of the flashy and sassy Rippon—the one who competes in a tight mesh shirt with shorter sleeves for the Olympics, once clarified that his butt was real, recently called himself a “glamazon bitch ready for the runway” and said on Saturday “I’m not a gay icon or America’s gay sweetheart; I’m just America’s sweetheart and I’m just an icon”—and Rodriguez knew he had to be there for what turned out to be a brilliant skate.  Rippon was in seventh place after his short program and finished 10th overall after Saturday’s free skate. “I just want to go out there and show everybody that you can be yourself,” Rippon said afterward. “You can show the world who your personality is. And you can be out there in your competitive field and be like, ‘I’m also going to kick your ass… in a fun and competitive way.’”
Figure-skating fans have long waved countries’ flags at international competitions and homemade banners for particular skaters at local events. But the Pride flag was so new that Rippon—one of three figure skaters competing here while openly gay, an Olympic first—couldn’t help but notice it when he qualified for Team USA at the national championships last month.
“It’s overwhelming,” Rippon told The Wall Street Journal afterward. “It’s something that I’ve never seen before, and it’s something that’s so awesome.” Rodriguez brings his stars-and-rainbow-stripes Pride flag wherever he goes in Pyeongchang. When he posted a photo of himself on Instagram displaying the flag at last week’s Opening Ceremony, he tagged people he thought would be interested, like Kenworthy, Rippon, and Bowe. “I even put RuPaul,” he said.
Kenworthy himself saw the notification on his Instagram and commented underneath Rodriguez’s post. “Thanks so much!” he wrote with three heart emojis.
There were once again Pride flags in the crowd for Rippon’s free skate on Saturday. But this time it wasn’t Rodriguez. It was a crew that included Kenworthy and his boyfriend.
Rippon heard their cheering, spied the flag before his long program and pointed right back at Kenworthy in recognition.
“I’ll be cheering for Gus tomorrow,” Rippon said.
By Ben Cohen and
Louise Radnofsky
—Joshua Robinson contributed to this article.
The Wall Streett Journal

Adamfoxie🦊 Celebrating 10 years of keeping an eye on the world for You.           [There will be final changes soon]

adamfoxie.blogspot.com brings you the important LGBT news others ignore. Does not repost from gay sites [except out.sports.com only when a well known athlete comes out]. Will post popular items with a different angle or to contribute to our readers tastes🦊

Over 5Million Reads Adam Gonzalez at February 20, 2018 No comments: Links to this post

Email ThisBlogThis!Share to TwitterShare to FacebookShare to Pinterest
Labels: Gay in Sports, S.Korea, The Olympics 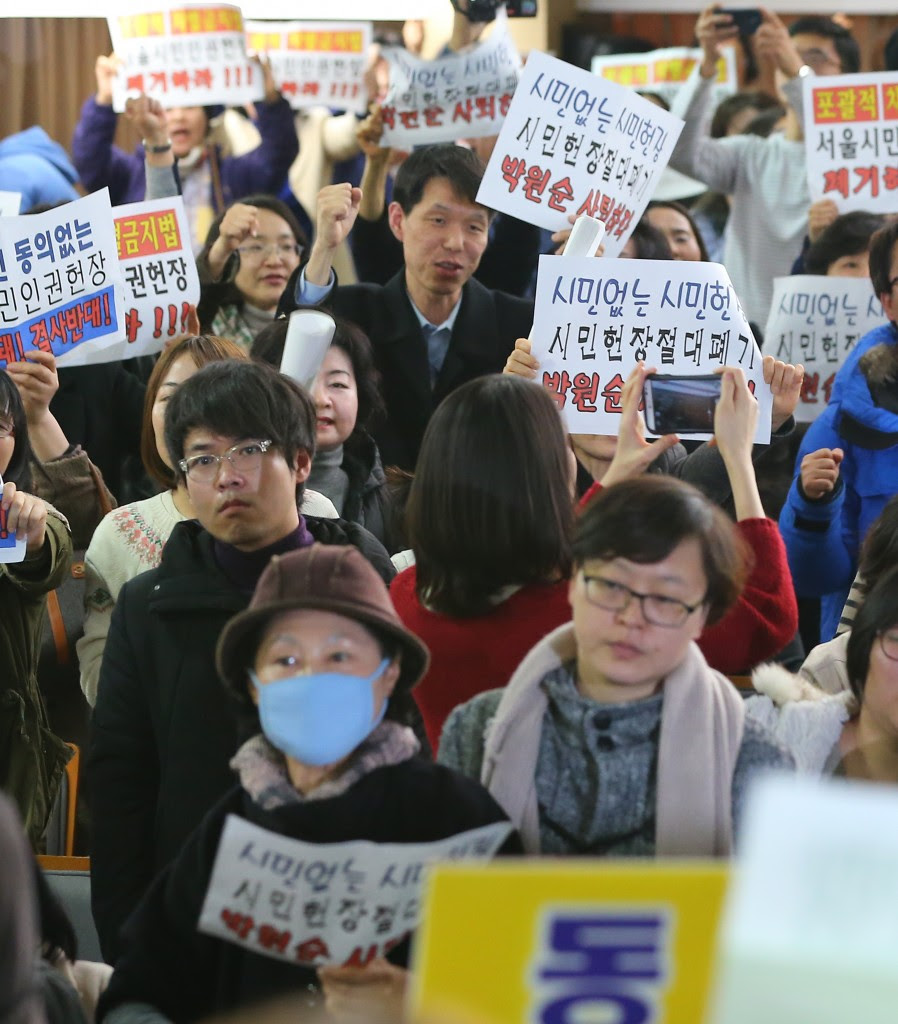 The Seoul Metropolitan Government (SMG) postponed a public hearing on gay rights Thursday after some 200 activists opposed to fair treatment of homosexuals stormed into the capital’s City Hall to stop the proceedings.
SMG officials initially planned to gather opinions from a range of experts during the hearing in an effort to draft a Charter of Human Rights for Citizens in Seoul.
Experts are divided over whether to include a clause on protecting sexual minorities in the charter.
Some Christian groups are vehemently opposed to including this statement — “Every Seoul citizen has a right not to be discriminated against based on sexual orientation, sexual identity, educational background, religion, and the right not to be subject to any form of discrimination banned by law.”
Among the protestors were members of the Christian Council of Korea, which represents some 45,000 churches, and is on the record as opposing gay rights.
They bombarded the SMG message board when Seoul Mayor Park Won-soon spoke out in favor of gay rights during an interview with a U.S. newspaper last month.
Park told the San Francisco Examiner that he personally agreed with protecting the rights of homosexuals.
Gay rights have been neglected in the nation’s political dialog.
In the 2013 presidential campaign, liberal contender Moon Jae-in pledged to explore “institutional alternatives” on the issue of same-sex marriage.
But in the face of a Christian backlash, he backed down, promising instead to “prevent laws permitting homosexual relations and marriages.”
He lost the election to President Park Geun-hye.
By Lee Kyung-min
http://www.koreatimesus.com
Over 5Million Reads Adam Gonzalez at November 22, 2014 No comments: Links to this post