One of the most simple rules when you throw a party and everything is legal (no drugs, no minors) you make sure the neighbors do not call the cops. You either pay them off (the neighbors not the cops) for the inconvenience or keep the party noise from spilling outside. If things are going on which will affect you job, profession, calling or what ever you call it, you err on the side of caution. The priest and Im sure if I met hm I would probably like him, it seems he had done this in the past to the point that some people went : No mas! Two roseMary's and 911. Actually since it's Vatican property the cops have no jurisdiction so the pope's Swiss guards went in to investigate. Ay Dios Mio!!
Adam

ROME—It all started with the usual complaints from disgruntled neighbors: funny smells, slamming doors, loud music, the sound of squeaky beds and laughter late into the night. In almost any other situation anywhere in the world, the angry neighbors would have confronted the noisy tenant, maybe left a mean note on the door or complained to the landlord and the matter would be settled.

But this particular dispute occurred in one of the most prestigious addresses in Rome, the so-called Ex Sant’Uffizio Palace, in the very apartment owned by the Congregation for the Doctrine of the Faith where Joseph Ratzinger lived for decades before becoming Pope Benedict XVI. The palatial ochre-colored building is home to dozens of high-ranking cardinals who live within walking distance of their jobs at the Roman Curia in Vatican City next door.

The fed-up neighbors were simply sick of what they described as a “steady stream of young men” who frequented Ratzinger’s former apartment, which had been given to Monsignor Luigi Capozzi, the secretary for Cardinal Francesco Coccopalmerio, who heads the Vatican’s Pontifical Council for Legislative Texts, which busies itself with deciphering and clarifying various points of canon law. So they called the cops, in this case the Vatican’s elite Swiss Guard gendarmerie unit, when the noise and movida nightlife just got to be too much.

Calls to the Swiss Guard turned up neither confirmations nor denials, but Capozzi is no longer at his job, according to the switchboard operator at his boss’ office.

Capozzi could be defrocked for his indiscretion, but that seems unlikely even though he would have clearly broken the vow of celibacy. His boss Cardinal Coccopalmerio has already replaced him and will not face any disciplinary measures for hiring such a promiscuous clerk. The cardinal is in no way implicated in the scandal, but he is expected to resign from his position next year when he turns 80, as is the custom. His office did not return calls for this story.

This latest salacious headline, which has become all-too-common when it comes to priests behaving badly, is said to have angered Pope Francis, who considers Coccopalmerio a close aid.
It comes on the heels of last week’s news that the pope’s finance czar, Cardinal George Pell, is facing criminal sex abuse charges for alleged crimes during his time as a priest in Australia. 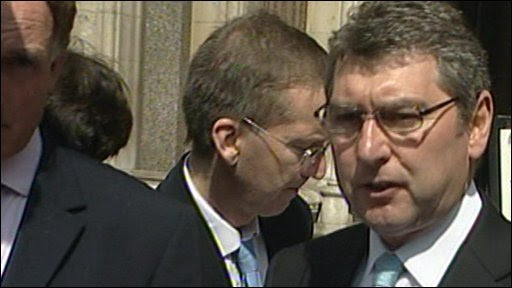 Inter-nation coverage:
A French judge has told Google to devise a way to take down all links to nine images of former F1 boss Max Mosley at a sadomasochistic orgy.
Mosley raised a case at the Paris superior court after claiming Google had not done enough to remove links to nine images of him cavorting with prostitutes - even though he successfully sued the News of the World, which published a video of the orgy, for breaching his privacy.
At a 2008 court hearing in Britain the F1 supremo confessed he had taken part in a sado-masochistic sex party.
Mr Justice Eady ruled the NoTW's allegations that the naughty knees-up had a Nazi theme were false. The judge admitted the orgy involved "bondage, beating and domination" and was "unconventional", but ordered the red-top to pay Mosley £60,000 nonetheless.
Now Google has been told to pay Mosley a token €1 (£0.89) in damages and €5,000 in costs, prompting the advertising giant to protest against the order to build a "censorship machine".
The court told Google to "remove and cease, for a period of five years beginning two months after this decision, the appearance of nine images identified by Max Mosley in the Google Images search engine results".
Mosley has fought Google in a number of countries in a bid to make the photographs and video disappear.
In a statement, Google’s associate general counsel, Daphne Keller, said: "This is a troubling ruling with serious consequences for free expression and we will appeal it. Even though we already provide a fast and effective way of removing unlawful material from our search index, the French court has instructed us to build what we believe amounts to a censorship machine."
However, despite the best efforts of Mosley's crack legal team, the ruling has sparked a new level of interest in the case.
Judging by Google's search stats, there hasn't yet (at the time of writing) been a sudden burst of interest in Mosley, although the number of people searching for his name is nowhere near as high as it was in April 2008 when the story first appeared.
Photographs and video of the orgy are still being distributed in the darker corners of the internet, in the sort of places Google's crawlers don't want to go, as well as on video and filesharing sites it doesn't own.
We're not going to tell readers how to access it (please don't post links to it in the comments – Vulture Central's backroom gremlins), but rest assured it is still out there as, despite outward appearances, Google doesn't rule the internet. It cannot remove content, but can only take down links to content in its search results.
On one well-known website, which we are not naming in deference to Mosley's proven predilection for wielding the legal cudgel, a user wrote: "The elite don't like getting exposed."
El Reg would like to take this opportunity to warn Mosley of a phenomenon known as the Streisand effect, which refers to how trying to ban content from the internet often makes people more likely to share it. Barbara Streisand tried to have pictures of her Malibu mansion removed from a digital collection of Californian coastline photographs, which fewer than 10 people had viewed prior to her unleashing the legal attack dogs. However, after finding out about the pictures, almost half a million people tried to download them.
The same happened to Beyonce, whose publicist famously asked Buzzfeed to take down unflattering images of her SuperBowl performance. The website declined to do so and the snaps quickly became a meme. ® 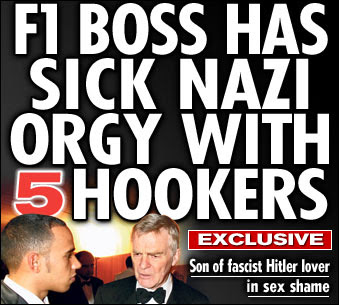 Google has been ordered by a French court to remove images of former Formula One racing chief Max Mosley having a sadomasochistic orgy with five prostitutes in what is been called a “Nazi sex party.” The court found that the images violate French privacy laws, and this ruling can have a huge effect on Google’s operations in Europe.
Mosley, a former president of the International Automobile Federation filed the lawsuit in September, requesting that Google automatically filter images from its search engine that link to the British newspaper that featured the photos, the News of the World.
The images depict an elderly Mosley being tied up, whipped, and humiliated by several women in a dungeon or a prison of some kind. The story first surfaced in April 2008, along with images and video.
News of the World called the photos a “Nazi orgy,” perhaps making reference to the fact that Mosley’s father, Oswald Mosley, was the head of the UK Fascist party and a friend of the Führer himself. Mosley denies that his sex party had a Nazi theme.
Mosley sued the News of the World for breaching privacy and was awarded $96,000 in damages. Since then the Murdoch-owned newspaper was forced to close after being found complicit in a phone hacking scandal. Google will now be fined 1,000 euro every time any of nine images are displayed in its search engine results.
The court ruled that Google must “remove and cease, for a period of five years beginning two months after this decision, the appearance of nine images identified by Max Mosley in the Google Images search engine results.”
Google has already removed hundreds of links to images of Mosley’s sadomasochistic sex rampage.
One quirk of internet culture is that when individuals and organizations demand that undesirable images be removed, just the opposite is liable to occur–the images get disseminated further, and made into memes, parodies, and spoofs. Mosley, a septuagenarian, seems to be operating under the misapprehension that when Google removes the images nobody will be able to see them ever again. The levee has already burst; the images are now being hosted on many independent websites and there are many different ways to find them, not just through Google.
Google will appeal the decision on the grounds that it if the company were forced to block search results to respect the privacy of individuals, it will hamper free expression.
“Even though we already provide a fast and effective way of removing unlawful material from our search index, the French court has instructed us to build what we believe amounts to a censorship machine,” said Google’s associate general counsel, Daphne Keller.
Google is under fire for other privacy lawsuits in Europe as well, and this is opening up the broader debate of whether search engines have any responsibility for the sites that come up in their search results.
At the time of writing, images of Max Mosly’s “Nazi sex party” can still be found on Google Image Search, although in modified or censored forms.
By K. Elsner

Over 5Million Reads Adam Gonzalez at November 08, 2013 No comments: Links to this post