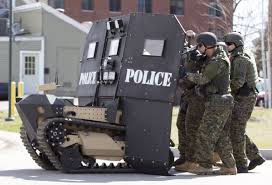 Is a ban on military gear enough to change police attitudes?
When  announced the ban Monday on state and local police obtaining military gear — including grenade launchers, tracked armored vehicles, bayonets and large-caliber weapons and ammunition — he did so hoping that the move, in part, would help society deal honestly and openly with issues of race.
"We've seen how militarized gear can sometimes give people a feeling like there's an occupying force as opposed to a force that's part of the community that's protecting them and serving them," the president said during a speech in
"If we as a society aren't willing to deal honestly with issues of race," Obama added in his call for change, "then we can't just expect police departments to solve these problems."
But after at least four incidents in the span of two years involving police killing young, unarmed black men, a question quickly surfaced on social media after the speech: How can simply limiting equipment given to police change an aggressive approach to black communities that existed long before the practice of militarizing departments?
Instead, many across the country are placing stock in additional approaches to improve police-community relations, such as the use of cameras and changing the racial makeup of departments. More than half of blacks (64%) and half of whites say police departments should reflect the racial makeup of the communities they serve, according to an April Economist/YouGov Poll. Support for body cameras on police is even higher among whites, with 89% either strongly supporting or somewhat supporting the measure.
Below, social media responses to USA TODAY Opinion's #tellusatoday questions, parts of the national Twitter conversation, interactive graphics and your chance to join the conversation:
Militarization

Over 5Million Reads Adam Gonzalez at June 09, 2015 No comments: Links to this post