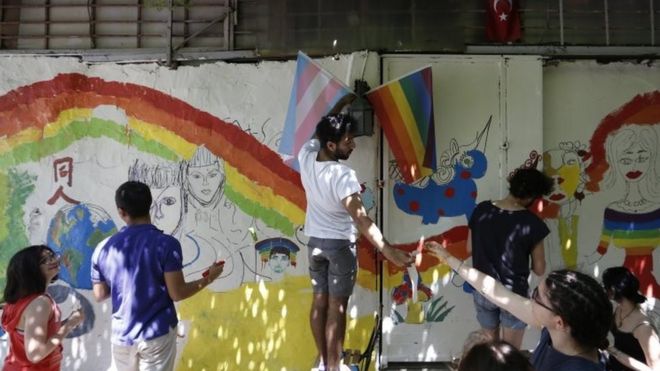 Organizers of Istanbul's annual Gay Pride march say it will go ahead despite a ban by the authorities of Turkey's largest city.
The event has been called for Sunday evening in the city's Taksim Square.
Authorities banned the march for the third year in a row, citing security concerns after threats from far-right groups.
Homosexuality is not illegal in Turkey - unlike in many Muslim nations - but analysts say homophobia remains widespread in the country.
President Recep Tayyip Erdogan, whose ruling AK Party is rooted in conservative Islam, has denied wanting to impose traditional religious values, saying he is committed to secularism. But he supports Turks' right to express their religion more openly.
He has been accused of growing authoritarianism in recent years.

Lara Ozlen from the Gay Pride organizing committee told AFP news agency: "It is obvious that a peaceful march is part of our constitutional right".
"It's been known for years. Instead of protecting us, to say 'do not march' just because some will be disturbed is undemocratic," she added.
Earlier, Istanbul's governor office banned the march, following threats from far-right groups to disrupt the event.
The city officials also said they had not received a formal request to hold the march - a claim denied by the organizers.
Last year, Riot police fired tear gas and plastic bullets after transgender rights activists gathered in Istanbul - in defiance of a ban on marching.
BBC
Over 5Million Reads Adam Gonzalez at June 25, 2017 No comments: Links to this post