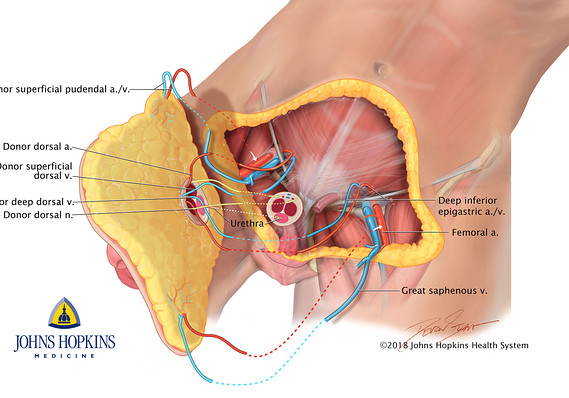 A U.S. serviceman severely injured several years ago in an IED blast in Afghanistan has received the world's first total penis and scrotum transplant, surgeons at the Johns Hopkins University School of Medicine announced Monday.
The man, whose identity was not released, is recovering well and expected to regain both urinary and sexual function, Richard Redett, who led the transplant team, said at a Monday telephone news conference.
The patient did not receive testicles from his donor to avoid the ethical issues that might ensue if he later had children, said Damon Cooney, another transplant team member. The testicles would have contained sperm from the recently deceased donor.
The donor was not identified, nor was his cause of death, but in a statement, his family praised the sergeant’s service to his country and noted the donor family includes a number of veterans.

“We are so thankful to say that our loved one would be proud and honored to know he provided such a special gift to you,” said the statement, read by Alexandra Glazier, president, and CEO of New England Donor Services, which arranged for the donation. “We hope you can return to better health very soon and we continue to wish you a speedy recovery.”
Two years ago, surgeons at Massachusetts General Hospital performed a more limited transplant on a penile cancer patient. That patient, Thomas Manning, continues to do well, though his sexual function hasn’t fully recovered yet, said Curtis Cetrulo, who runs the reconstructive transplantation program at Massachusetts General. The hospital has yet to conduct another penile transplant, as it awaits funding and other logistical issues, he said.
There have also been several successful penile transplants in South Africa, as well as an unsuccessful one in China.
The Johns Hopkins surgery, performed in a 14-hour procedure in late March, was the most extensive yet, involving more tissue that has been previously transplanted, the surgeons said.
In addition to a large skin graft covering part of the sergeant’s abdomen, penis, and scrotum, surgeons connected three arteries, four veins, and two nerves to provide blood flow and sensation to the donated tissue. His internal organs were not severely damaged by the blast.
Redett said he expects the patient will regain the ability to urinate by the time he leaves the hospital later this week. It will take about six months for the nerves to regrow enough to restore sexual function and sensation, but Redett said he is optimistic that will take place.
Johns Hopkins covered the cost of the procedure, and hopes to complete more in the near future, said W. P. Andrew Lee, who directs the hospital’s Department of Plastic and Reconstructive Surgery.
The hospital does not plan to use the procedure for gender reassignment surgery, he said.
Once it becomes more routine, penile transplantation is likely to cost about the same as a liver transplant, said L. Scott Levin, chairman of orthopedic surgery and a professor of plastic surgery at Penn Medicine. (One recent estimate puts the total cost of a liver transplant in the United States above $800,000.) It is still an open question who will pay for such procedures, Levin said.
Another major issue in transplantation is rejection. The recipient’s body may reject the donated tissue at any time so the Johns Hopkins patient will have to be on continuous therapy to tamp down his immune system, said Gerald Brandacher, who handled the immune aspects of the Johns Hopkins transplant.
To reduce the risk of rejection, the patient was also infused with bone marrow from the donor. This approach has been used in eight other patients who received transplants, such as arms, that were transformative but not lifesaving. Balancing the donor’s bone marrow with the recipient’s allows the patient to take only one low-dose medication a day instead of the three typically taken by transplant patients, Brandacher said.
Injuries that affect sexual and urinary function can be devastating to a person’s identity, self-esteem, and intimate relationships, said Lee, whose department has been preparing for penile transplantations since 2013.
“We believe that genital-urinary transplantation can help those warriors with missing genitalia, just as hand and arm transplants transformed the lives of amputees,” he said.
At Massachusetts General, publicity surrounding the penile transplant encouraged other patients with genitourinary tissue damage to seek care.
“We’ve had many people who are really despondent come out of the shadows and get worked up,” Cetrulo said.
Even if they weren't transplanted candidates they have now been helped in other ways, Cetrulo said, noting many people with these conditions consider suicide and suffer even more emotional pain than people in need of arm or face transplants.
Hopefully, the Johns Hopkins' patient will inspire others to seek help, Cetrulo said. “That’s one of the most incredible and important contributions of this case, not only to this individual whose life has probably been saved.”
Karen Weintraub, Special to USA TODAY
Pictures obtained through Google by adamfoxie🦊
Over 5Million Reads Adam Gonzalez at April 25, 2018 No comments: Links to this post

The 140 LBS.Testicle Man Has Operation But Looses Most Of The Other Thing

Wesley Warren Jr had a 13-hour surgery to remove his swollen testicles after they grew so huge he had to wear a hoodie top as trousers to support the load.
The 49-year-old couldn’t have sex and suffered from crippling pain from carrying around the testicles - which weighed more than a BABY HIPPO.
But now this American man fears he will never be able to have a relationship with a woman after the surgery left his Penis measuring just an INCH long.
Speaking to the Sun, Wesley said: “I know the majority of people are probably expecting me to express extreme happiness and glee that my life has been transformed since the sac has been removed - but it’s not as simple as that.
“I do feel a great sense of comfort that the weight is no longer between my legs. It got to the point that it was a danger to my health.
“But when I look down at what’s here now it’s not the same as what it was. It’s totally different.
“My natural look prior to the growth is not what came out of surgery. What came out of surgery is a nub an inch long and it doesn’t get any larger.
“I’m grateful to have been pulled out of the fire, I was getting burned, but now I’m dealing with the first degree burns. I’m still disfigured.

Source and pic:The Sun
Over 5Million Reads Adam Gonzalez at July 12, 2013 No comments: Links to this post