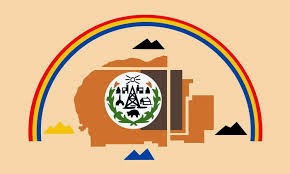 Tradition reigns here on the Navajo reservation, where the words of elders are treated as gospel and many people still live or pray in circular dwellings called hogans.
The national debate over gay marriage, however, is prompting some Navajos to re-examine a 2005 tribal law called the Dine Marriage Act, which prohibits same-sex unions on the reservation.
Among the tribal politicians who have said they are amenable to repealing the law is the Navajo Nation president, Ben Shelly, who has said he would go along with a repeal if the Navajo Nation Council voted in favor of it.
And at least one Navajo presidential aspirant — Joe Shirley, a former president who is running again — favors legalizing same-sex marriage. “Our culture dictates acceptance,” Shirley, 67, said of gay Navajos in a slow, grandfatherly tone during an interview. “They are part of our family, they are our children, and we don’t need to be partial.”
To Navajo traditionalists, however, the rapid redefinition of marriage in states around the country has made the 2005 tribal law more important than ever.
“It’s not for us,” Otto Tso, a Navajo legislator, said of gay marriage. “We have to look at our culture, our society, where we come from, talk to our elders.”
The U.S. Supreme Court is expected to decide this year whether states can prohibit same-sex marriages, but the ruling would not apply to the Navajo Nation because the country’s 556 tribes are sovereign entities.
Leading the charge for gay marriage here is Alray Nelson, 29, a top aid  e to Shirley. Nelson, who would like to marry his partner, Brennen Yonnie, has pushed for years to repeal the Dine Marriage Act and has a small coalition of core supporters — about 15 of them, he said. But some gay Navajos, he said, have not joined the coalition for fear they will be ostracized.
Other gay tribal citizens say they support same-sex marriage, but do not consider marriage rights a priority. Most tribal lawmakers say they have other priorities — creating jobs, for example, or channeling electricity to those without it.
bendbulletin.com
Over 5.6 Million Reads Adam Gonzalez at February 23, 2015 No comments: