A New LGBT Focused Credit Union Will Open in 2020 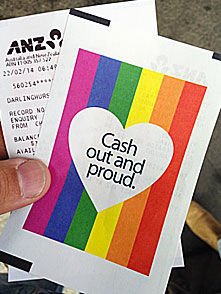 The LGBT community just had a big breakthrough in the financial services industry.
On Monday, Michigan approved a charter for Superbia Credit Union, the first credit union in America designed to serve and advocate for LGBT customers across the country. Online service will begin in early 2020.
Although Superbia bills itself as an LGBT-oriented financial institution, its virtual doors will be open to all customers, says Myles Meyers, founder of Superbia Services Inc., the parent company that created the credit union.
The financial incentive behind it is clear: With a collective buying power of just under $1 trillion in 2015, the LGBT community has strong economic clout. Moreover, same-sex couples have a higher rate of employment and a higher median income than opposite-sex couples.

Brand loyalty is also high among LGBT customers. Over 45% of consumers under the age of 34 say they’re more likely to do repeat business with an LGBT-friendly company, according to a Google Consumer Survey.
“Superbia is going to operate as part of the fabric of the LGBT community,” says Meyers, “and offer benefits that respond to its needs.”
Those benefits, still being crafted, will include loan options for same-sex couples looking to undertake in vitro fertilization, loans for transgender customers who are currently or will be transitioning, and savings accounts with higher-than-average interest rates, which Meyers says can narrow theLGBT wealth gap and improve the community’s overall financial health.
In 2016, the federal Consumer Financial Protection Bureau made it illegal for creditors to refuse to issue loans, credit cards, and mortgages on the basis of gender identity and sexual orientation. But same-sex borrowers still experience higher rejection rates when applying for loans and pay higher interest rates once they are approved, despite posing less of a credit risk than heterosexual borrowers.
“This [credit union] will remove the intolerance and discrimination that the LBGT community faces when accessing banking services,” says Meyers, and all profits will go back into the credit union or to organizations that respond to LGBT people’s needs.
Over time, Superbia will provide a full suite of products and services, including checking and savings accounts, and eventually credit cards, debit cards and loans, Meyers says.


by Ruth Umoh
Over 5Million Reads Adam Gonzalez at September 18, 2019 No comments: Links to this post