The state is part of a pilot LGBT + tourism program and seeks part of the flow of visitors that the neighboring state concentrates on.
Madrid, España

To strengthen the diversity line, the state is part of a federal government pilot program for the LGBT + community that started 10 months ago. (LUNAMARINA / Getty Images / iStockphoto)
Madrid Spain.
For Yucatan, the name of the game in tourism is diversification: in destinations, trying to exercise more inclusive tourism for communities such as LGBT +, and also decentralizing the high demand that giants like Chichen Itza receive.
Michelle Friedman, secretary of tourism of Yucatan, explains that the state is a multi-segment destination, where niches such as business, wellness, luxury, gastronomy, culture and even more specific ones, such as LGBT +, have enormous development potential.

“It is a state that has everything, and that has been in the shadow of the neighboring state for many years (Quintana Roo). We have a lot to work on in terms of connectivity, services, training, tourism products, establishments, and promotion, and that is what we have been doing: finding that development potential that Yucatan has, but doing it correctly, in a sustainability framework ” , he said during the 40th edition of the International Tourism Fair (Fitur), which is held in Madrid.

To strengthen the area of ​​diversity, the state is part of a federal government pilot program for the LGBT + community that started 10 months ago, which consists of raising awareness and training of destinations, hotels and service providers, in the first phase. Then, it will prioritize the development of specific products for this segment, as well as the adaptation of the latest trends in digital marketing and promotion, explains Oriol Pamies, CEO of Queer Destinations, a company that has accompanied the state in this process.

"The goal for 2020 is that every month we work with our team of trainers in a different destination, closing the year with businesses trained in more than 20 destinations (adding those of the first phase)," he said.

This segment also has significant economic spill potential. According to LGBT Capital estimates, in 2018 the LGBT + community - made up of 496 million people - made a worldwide consumption of 3.6 billion dollars, so it is not enough to attract tourists, but also to distribute them in the attractions that house the state.

Therefore, Friedman points out that work has been done on decentralization and inclusion so that tourism benefits the entire population, in a work where the capital, Mérida, and the main archaeological destination, Chichen Itza, are not ceased to strengthen, but which contemplates the rest of the state.

“This is the case of Tekax, Las Coloradas, Río Lagartos, and we have worked hard to boost our magical towns in Izamal and Valladolid. We have made long-range political strategies in the field involving academia, private initiative, and government, along with other agencies that allow us to guide us. ”

Yucatan closed the year with several improvements in its tourist flows: it was in the first places of growth in tourists with a 15% increase compared to 2018, and broke the barrier of 2 million visitors, not counting hikers to other products and archeological zones, with which the indicator doubles, ensures the official.

During the year, more than 15,000 million pesos of private tourist investment were captured this year, and also added six new routes in air connectivity and 51 additional cruises.

Translation by Google
Over 5Million Reads Adam Gonzalez at January 29, 2020 No comments: Links to this post

Amid tight security, hundreds of thousands of people took part in a global gay rights demonstration in Madrid on Saturday.

"For all the people in countries who are suffering persecution, we have to celebrate and make visible our pride," Jesus Generelo, the head of the Spanish federation of LGBT people, told revelers.

The rally had been expected to draw between 1 million and 2 million people to march for gay, lesbian, bisexual and transgender rights, organizers and authorities said. Madrid city officials said later that "hundreds of thousands of people" were in the streets, dancing, cheering or watching the parade. Officials had released no official count by late Saturday.

The gathering, led by Spain's major political parties, was the highlight of a 10-day World Pride 2017 festival, which ends Sunday. 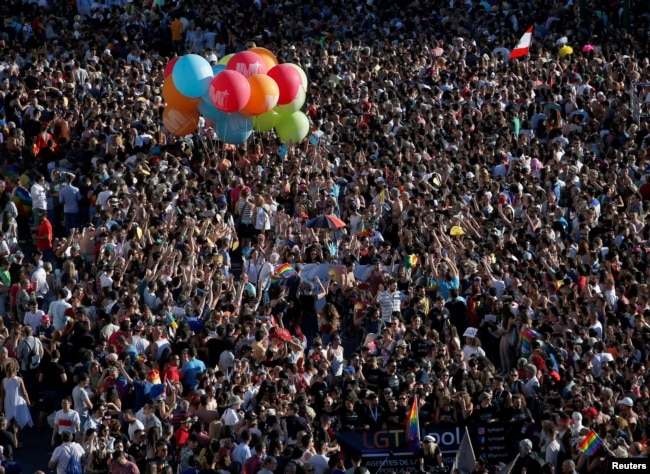 While police did not identify a specific terror threat regarding the pride parade, Europe is on edge after several high-profile attacks, such as recently in Britain and France.

"There is no specific terrorist threat but a generalized threat," German Castineira, operations chief for Madrid police, told the French news agency AFP earlier this week.

Thousands of security officials were on hand for the parade.

Forty years after members of the nation's gay community began marching for their rights, Spain has become one of the most progressive countries for gay rights. In 2005, it became the third country — after the Netherlands and Belgium — to legalize same-sex marriage.

Parades and events were held elsewhere around the globe Saturday.

In Singapore, thousands of people dressed in pink for the Pink Dot rally, which began in 2009. The government banned foreign participants from the rally.

In Northern Ireland, thousands marched in Belfast to demand the legalization of same-sex marriages, a day after Germany's parliament voted to do so.

However, a march for transgender rights that was scheduled for Sunday in Turkey has been canceled. The Istanbul governor's office cited public order and the safety of participants and tourists in canceling the eighth Trans Pride March.

Gay rights and the LGBT community are under assault in many countries.

ILGA, an international LGBT association, released its State-sponsored Homophobia report last month, which listed that 72 countries still consider intercourse between same-sex couples to be illegal. Same-sex couples also face the death penalty in Iran, Saudi Arabia, Sudan and Yemen, and in parts of Nigeria and Somalia.

Over 5Million Reads Adam Gonzalez at July 03, 2017 No comments: Links to this post 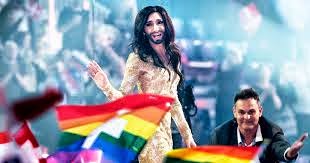 Vast crowds of revellers in high heels, wigs and figure-hugging dresses cavorted in the streets of Madrid on Saturday in what was billed as Europe’s biggest gay pride parade. 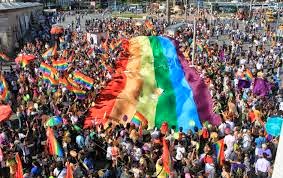 Hundreds of thousands crammed the Spanish capital's broad central avenues to the din of drums and whistles as rainbow-coloured flags fluttered in the sunshine.
Dressed as everything from policemen to ancient warriors with swords and helmets, drag queens, transsexuals and other party-goers danced in the street and waved from double-decker buses that crawled slowly through the crowd.
"I'm having a great time. This is an opportunity

for me to offer myself to the world of showbiz," said Julia Woman, a lanky man of 30 in a blond wig and leopard-print dress, whose high heels made him nearly six and half feet (two metres) tall.
"It's also a chance to defend my rights on the subject of homophobia and all that. And also to have a bit of fun, a bit of personal satisfaction."
Organizers expected more than a million people, including thousands from abroad, at the evening parade, the main event in five days of festivities by defenders of lesbian, gay, bisexual and transgender (LGBT) rights.
"I came because I was told it is the biggest Gay Pride parade, and that's true," said Christophe Probst, 47, a Frenchman who came from Paris for the party. 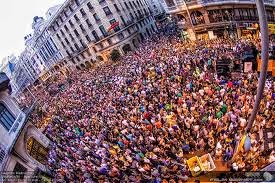 "It's fantastic. The whole city gets involved. There is nothing else like it."The festival kicked off on Wednesday night with an open air appearance by Conchita Wurst, the bearded Austrian transvestite who won the Eurovision song contest in May.
That was followed on Thursday by an annual highlight of the festival: men in high heels and dresses raced on foot through Madrid's gay district, Chueca, cheered on by crowds.
Wurst sang on Friday evening alongside various Spanish stars at a concert in the Vicente Calderon stadium, home to Atletico Madrid football club.
Organizers call it the biggest pride party in Europe. The two LGBT groupings behind Madrid Pride, COGAM and FELGTB, said they expected 1.2 million people to join in.
Madrid police said nearly 500 officers would be in the streets for security.
Pride events in other European capitals have reported hundreds of thousands of participants.
The groups that organised the march dedicated it this year to victims of discrimination in countries where gays, lesbians, bisexuals and transsexuals are punished, sometimes by death.
"We are organising one of the best Pride events in the world," said Boti G. Rodrigo, leader of FELGTB, in a statement.
"It is time to speak up for all those who cannot, so they can see that they are not alone in suffering, that we are fighting for their freedoms and for our own and that LGBT human rights are inalienable," she added.
The organisers warned in their manifesto for this year's event against the threat of discrimination posed by far-right groups which have gained strength in some European countries.
They added that spending cuts imposed in Spain by the conservative Popular Party during the recent economic

crisis had increased discrimination in access to public services such as healthcare.
Spain emerged in the late 1970s from several decades of social conservatism under the dictator Francisco Franco, into an era of liberal reforms.
In 2005 it became the third country in the European Union to legalise gay marriage, after the Netherlands and Belgium. Several other countries around the world have followed.
Over 5Million Reads Adam Gonzalez at July 07, 2014 No comments: Links to this post