Global Warming Might Not Have Initiated Harvey But How Much Did it Contribute? 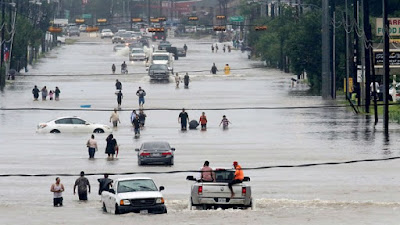 The rain is still falling, and lives are still very much at risk in Houston. It’s early to be talking about the role of climate change in the awful events unfolding in Texas. But at this moment—when the world is watching and the U.S. president and majority party in Congress are in deep denial about the reality of global warming—we think it is appropriate to restate what current science tells us.

As the climate warms, we have seen heavy precipitation events increasing in intensity and frequency around the world, including the U.S.—and including Houston itself, where recent decades have seen repeated floods with magnitudes that would have historically been rare. Climate science tells us to expect this as a consequence of the increased water vapor content of a warmer atmosphere. The increase in water vapor, in turn, is one of the most well understood and verified aspects of warming. It is in the observations and is consistent with our physical understanding of the atmosphere, as well as with the predictions of virtually every plausible computer model.

Tropical cyclones are similar to other truly heavy rain events in that they are very efficient in turning that water vapor into rain. While there is much uncertainty about how tropical cyclones should change with global warming, that they should produce more rain is perhaps one of the most confident predictions of current science on this topic. The only debate is how much heavier the rains should get with each degree of warming, and to what extent this effect is already present in observed storms today.

(Perhaps the only greater certainty is that with higher sea level, storm surge-induced flooding is increasing due to the water’s higher starting point. Storm surge is not the cause of the current life-threatening flooding in Texas, but it could have been if Harvey had made landfall in a different location.)

In the case of Harvey, as with other specific events, scientists now have the capability to perform attribution studies which make more quantitative statements about how greenhouse gas emissions influenced that event. How well such studies can be done differs from one event type to another.

Hurricanes are the more difficult ones, but attribution studies on them can be done well enough to produce useful information. We expect that such studies will be done on Harvey. We should not make detailed statements presupposing their outcomes before they are done.

Based on many other studies of precipitation events, however—including a recent one on the Louisiana floods of last year—it is reasonable to speculate that they will find that warming amplified Harvey's rainfall by a modest, but not necessarily insignificant, percentage. Attribution studies—at least good ones—will never say that global warming "caused" an event, full stop. Other factors are always the proximate causes. But the warming changes the background conditions in a way that can make an event more or less likely or change its amplitude.

In this case, one of the most important causes of the disaster is Harvey's slow motion. That, in turn, is a consequence of the specific weather situation, in which the storm is caught between two high-pressure systems and the jet stream is too far away to the north to pull it away. In other words, it has just been sitting and dumping its huge quantities of rain in the same area for days, rather than spreading it out over a long track as a typical storm would.

There are some ideas in the scientific literature that suggest that global warming may make this situation more probable. However, these ideas are still speculative and not widely agreed upon by scientists. Our default assumption is that these factors are natural, random accidents and that the role of warming is just to add more water vapor to the situation.

All this said, given a metro area of 6.5 million people that basically sits in a paved floodplain, crossed by bayous, creeks, and rivers, and the same meteorological situation, we would be seeing a very major disaster even without any human influence on climate. But any extra rainfall due to warming just increases the human and financial toll of the disaster. When people argue that it is too expensive to take action to reduce carbon emissions or to enforce development practices that take flood risk into greater consideration, that needs to be measured against the cost of not doing anything. Any extra inches of rain due to warming should be part of that calculation.