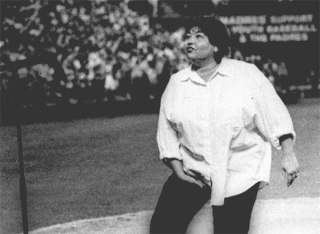 The Padres could have done their homework, though. Barr’s awful anthem wasn’t her first revolting offense at a baseball game. During the 1989 World Series, she and her husband at the time, Tom Arnold, mooned the crowd at the Oakland Coliseum.
In the end, the aftermath of Barr’s bad behavior hurt the ratings of her hit TV show. The San Diego Padres took the high road and played a pre-recorded version of The Star-Spangled Banner as performed by the U.S. Marine Corps Band for the remainder of the season

No, She is not kneeling while she sings the national anthem but she is grabbing what Trump Likes to grab....Anything from Pence? Is he standing up yet? dropping pants? Trump? He is the grabber so he might not have liked this and doesn't like people more popular than he but since she voted for him he does call her once in a while. I would imagine they exchange jokes about genitalia or even crooked Hillary.


It is adamfoxie's 10th🦊Anniversay. 10 years witnessing the world and bringing you a pieace whcih is ussually not getting its due coverage. 4.9 Million Reads