The man who was recently caught on video berating a couple after their stroller hit his leg has not yet watched the video of himself shouting about how he "settled" Downtown Brooklyn for other white people. "I’m not gonna watch it, I understand it’s probably ugly, and I’ll feel embarrassed about it," the man told Gothamist. “I can’t stand to watch that stuff."

The 46-year-old man, who we'll call B.A., invited us into the modest Fort Greene studio he shares with his 10-year-old pit bull and asked us to withhold his name for fear that he'll lose clients—B.A. is a self-employed personal trainer. He’s also a native New Yorker.

"I was born in St. Vincent's, I grew up on West 4th Street, I’ve been here from day one," B.A. told us.
"I have a temper, when I start seeing red it’s like I lose it, I admit to that. I lose it. I start screaming," he said of his reaction to being hit with the stroller, which he said left a nasty gash on his leg.
"The woman is talking over her shoulder to her husband, and doesn't notice," he said. "So I said a snarky thing, which the brothers say to me when I bump into them, which is 'excuse you.' We all know that's acceptable in New York. It's a little dicky, but that's what people say."
Instead of apologizing or acknowledging the faux pas, B.A. says the woman "starts screaming at me, 'Fuck you! Who do you think you are?' Then the guy starts screaming at me, 'Fuck you,' and starts coming at me with his fists like this. Now as soon as the guy comes at me with his fists, I'm telling you, if you come at somebody with your fists, be prepared that [the other person] is going to put their fists back up."

Eventually, the confrontation was diffused by a security guard, who B.A. says "deserves a medal."
"I didn’t want him to be in that situation. But nobody’s asking about golf shirt and Coke bottle glasses, why is he coming at me?"
We suggested it was possible that he was judging the man in the video the same way that the Internet is now judging him.
"You right, I don’t know his story, but I did see his pink Izod, his glasses, I know the story of the Bell Tower," B.A. replied, referring to the BellTel Lofts (on the video, the man's shirt appears to be dark blue).
"Oh you live in the Bell Tower, you’re walking around in your polo shirt, you’re pushing your stroller into me and you don’t say 'excuse me.' You must be some kind of transplanted white trash. They don’t think they are because they’ve got money, but they act like it, you know?"
Still, B.A. says he can't excuse his behavior on the video. "I agree: It’s not really fair to go around screaming ‘I’m a native New Yorker no one can do anything.’ But I’m not that person."
Yet B.A., who was quick to produce the acting credits, modeling spots, and martial arts trophies he's accrued over the years, says he frequently finds himself in these situations: chastising a "Wall Street guy" in Fort Greene Park for berating park regulars, chiding a couple laying on a blanket for not picking up their trash ("I said, 'I pick up my dog’s shit every day so you can fuck your girlfriend in this park at night.' That made sense to him!”), and lecturing a woman whose dog was killing squirrels while she stared blankly at her phone.

"My friend who’s a cop said, 'stop losing your temper, call the police every time, just let them handle it and it’s out of your hands.' And he’s right about that, the only problem is, I don’t have a cell phone, I’m the last person who doesn’t carry a cell phone, because I don’t give a fuck," B.A. says. "Calm down with that shit already. Talk to me, like people. I’m old school."
So how could B.A. have claimed to have "settled" Fort Greene when he moved there in 1997? Isn't he just as much of a "colonizer" as the man he was shouting at? Aren't we all?
"When I came down here, Myrtle Avenue here, it was abandoned. When I used to go down to the liquor store down there, the black people would all run, because they thought I was a cop! So when I tell you I’m having a fight about white privilege with this man, I’m slightly guilty because I’m moving in to gentrify a neighborhood, except I’m the first one here when nobody wants to live here."
We asked B.A. to react to a man offscreen who sarcastically shouted, "Thank you, white guy!" after he claimed to have "settled" Downtown Brooklyn.
"My street cred, especially in the black community, in this city, is huge. I grew up on the West 4th Street basketball courts. I grew up multicultured. I grew up with Stonewall, I grew up on the laps of drag queens,” he said.

B.A. explained that one becomes a native New Yorker when they feel a sense of ownership about the city.
"When you feel you have ownership of something, you cherish it and you take care of it. As soon you feel like you’re just working here or just visiting, you don’t treat it the same way. So what I have in this city is ownership. When I look at the concrete I think, oh my blood mixes with the concrete.”

Over 5Million Reads Adam Gonzalez at September 25, 2015 No comments: Links to this post

The reason? Big business. Specifically, Chinese bankers have reportedly expressed an interest in redeveloping the Centro Financiero Confinanzas for its original intended use as an office space.

Now, advocates report that 100 families have already been forcibly evicted from the 45-story building as of July 23, and the remainder of its population of 1,200 families is soon to follow. This comes just two months after Venezuelan President Nicolas Maduro's government promised to improve living conditions there.

The backstory: In the mid-'90s, the tower's construction was abandoned amid the death of primary investor David Brillembourg and a subsequent financial crisis. As a result, squatters took over the entire building, installing electrical and water systems, developing their own managerial system, and occupying the bottom 28 floors with shops, apartments and even daycare centers.

However, the community is not without its critics. While some call it a model commune with clean common spaces and nice apartments, others point to the fact that the building's de facto leader is Alexander "El Niño" Daza, a brutal former gang boss rumored to have thrown his enemies off the upper floors.

The tower is also regarded as a well-guarded and relatively well-off base of left-wing "Chavismo," the political ideology of late President Hugo Chávez. It has stood as both a symbol of failed capitalism and the shortcomings of its alternatives for close to two decades.

What Venezuelans are saying: The international Urban Think Tank worries that Maduro's government is neglecting a valuable opportunity to use the community as the basis for "innovative and inclusive development" by scattering the tower's residents. Critics say the government abandoned its initial promise to help refurnish the site to improve the lives of poor people once visions of foreign cash began dancing in their heads.

For their part, the Venezuelan government insists the evacuations are about safety rather than money. Caracas redevelopment overseer Ernesto Villegas says the rumor that Chinese investors want to finish the building "doesn't make any sense," since the structure is unsafe, in terrible condition and possibly irreparable. He told reporters, “The tower does not meet the minimum conditions for safe, dignifi
living."

Still, the ultimate plans for the building clearly will not involve the current residents, Chinese investment or not. Maduro said recently that three options were on the table: destruction, the establishment of a new residential community or commercial redevelopment.

It seems like big business will likely win that competition.

By Tom McKay
mic.com
Over 5Million Reads Adam Gonzalez at July 31, 2014 No comments: Links to this post

'Are You A Gentrifier? 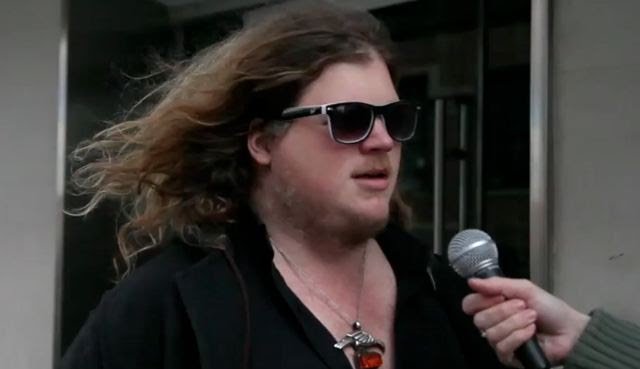 No one wants to see their identity lazily compartmentalized into "hipster" or "sociopath" or a "Staten Islander," but assigning reductive labels to describe otherwise disparate populations is what makes our city country Internet great. It's no secret that Bushwick is changing, along with plenty of other neighborhoods—but who's responsible? And does anyone ever want to admit that their mere presence in a place is altering the landscape of the community?
In light of landlords licking their chops (and casually evicting long-term tenants) at the thought of charging higher rent to wealthy newcomers, we decided to take a stroll in the area surrounding the Halsey Street L stop and chat with residents there—some of whom have lived in the neighborhood for a month, others who have never lived elsewhere—about what they make of the changes arriving increasingly rapid-fire to the few blocks of cityscape they call home.
Are long-time residents peeved about entitled art students driving up their cost of living? Are gentrifiers aware they're gentrifiers? Spell check refuses to acknowledge the word "gentrifier" even exists—does it? Or are we all just people trying to get by, man?

Over 5Million Reads Adam Gonzalez at March 22, 2014 No comments: Links to this post