Hundreds of gay and lesbian people of South Asian heritage are believed to be under pressure to marry someone of the opposite sex, police say.
West Midlands Police said a growing number are now contacting the force after being ordered to have a heterosexual wedding by their families.
The UK's forced marriage unit heard from at least 30 LGBT people last year.
But they say more people are likely to be affected as being gay is often seen as taboo among south Asian communities.
This is supported by data from charities and LGBT organizations that have made referrals to the police.
Twenty-two gay and lesbian people of South Asian heritage have told the BBC that at some point they were pressured to marry somebody of the opposite sex.
In most of those cases, the individuals said they were tempted to go ahead with the marriage because they did not want to embarrass their family or ruin their reputation.
My big fake straight wedding
Male 'honor' cases 'under reported'

'My family tried to 'cure' my homosexuality'

Ranjeep - not his real name - told his family a couple of years ago that he was gay. His father's first response was to tell him to marry a woman.
"I'm Sikh, and culturally the older generation don't accept homosexuality," he said. "My father ordered me to marry a woman because he thought that would cure my homosexuality."
Ranjeep, who is in his 30s and from Coventry, said: "The emotional pressure is really hard and distressing and you don't want to bring shame on the family by saying you're gay. I ended up marrying my partner but my parents didn't come to the wedding."
He said he lives two separate lives and is distraught his father will not accept him for who he is.
"It's heartbreaking to see my father heart-broken because of my sexuality."
A forced marriage is where one or both people do not consent to the marriage and pressure or abuse is used. In the UK, it is illegal and recognized as a form of violence against women and men.
The pressure put on people to marry against their will can be physical or emotional and psychological.
Det Sgt Trudy Gittins, from the West Midlands force, said the people coming forward from the LGBT community in recent months are from all walks of life.
"We've got professional well-educated people who still feel that immense pressure because there's a whole expectation that they will not bring shame on their family," she said.
"Homophobia is rife in some communities and to be seen as being gay or lesbian or bisexual it can absolutely destroy the dynamic of that community and this person just has that burden every single day and it can cause a great deal of anxiety and distress and in some cases, they also feel suicidal."

The Foreign Office and Home Office set up the Forced Marriage Unit in 2005. Figures show 30 LGBT people who contacted the unit last year were among the 1,428 people who asked for help.
But the government acknowledged the actual number of cases that involving LGBT people could be "significantly higher" as it did not explicitly ask people whether their sexuality was the trigger for the forced marriage.
The unit is now working with LGBT groups to encourage more victims to come forward and get support.
Khakan Qureshi runs a Birmingham-based organization called Finding a Voice, which gives advice to gay and lesbian people of south Asian origin.
He is of Muslim faith and told his family he was gay more than two decades ago. He says they no longer speak to him.
"I had one relative who is in his 20s, and he told me that he would kill his son if he told him that he was gay.
"And it's this old fashioned attitude that scares me because attitudes haven't changed since I came out more than 20 years ago. The younger generation has to be bold and reject this sort of homophobia and ignorance or attitudes will stay the same."
Blackburn-based imam Saleem Sedat said homosexual people should be treated with respect and humanity.
"Islam is categorically against forged marriage," he said. "What's important is that we're sensitive towards the concerns of young people including when it comes to matters of sexuality and that we provide them with the necessary support and care they require to grow and become healthy members of society."
Over 5Million Reads Adam Gonzalez at July 20, 2017 No comments: Links to this post The case of bisexual British businessman Shrien Dewani - cleared this week of murdering his new bride - shone a spotlight on the gay Asian community in Britain. How difficult is it to be gay when homosexuality is seen as a taboo?
It's a world that's often hidden.
Many homosexual men - and women - of south Asian descent are believed to be hiding their true sexuality within heterosexual, often arranged, marriages in Britain.
Rahul, a Hindu, knows what that's like.
He says he always felt he was gay, but accepted an arranged marriage anyway. He thought the "phase" would pass.
"But I realised very quickly that I'd made a huge mistake, that these feelings weren't going to disappear."
Family shame

When he finally came out to his family, they were angry.
"I felt that secretly a part of them always knew, I think parents always do know," he says.
"I think the anger was 'Oh my god, we all knew he was gay, but he finally told his wife. How could he do that?'."
Rahul - not his real name - says his parents would have been happier if he'd stayed married, had children and kept quiet about his homosexuality, which his community sees as "shameful".
He wanted to hide his true identity to protect his family and ex-wife from more shame.
South Asian communities prize marriage highly; from the day their children are born, parents begin saving for their weddings.
Many gay people come under intense pressure to marry someone of the opposite sex.
According to Asif Quraishi, who works for the support charity Naz, many of them succumb.
His contacts with people lead him to believe as many as seven in 10 gay Asians are in what he calls "inauthentic marriages".
'Derogatory words'
"There isn't actually a word for gay or lesbian in our mother languages," he says.
"The only words that there are are totally derogatory."
Asif is one of the UK's few gay, Asian drag queens. He's also a practising Muslim.
As Asifa Lahore, he runs a club night in west London. 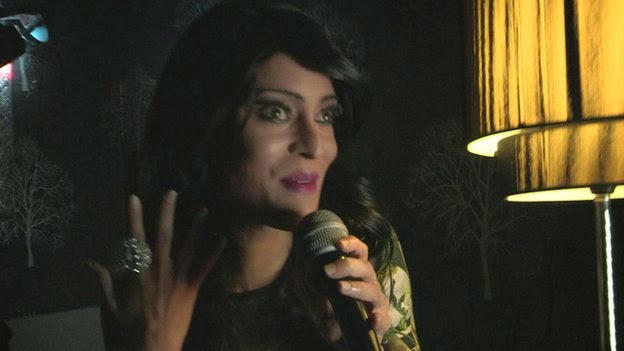 Many of the men and women there are leading double lives, conforming to what their families require of them, while also being gay.
Several talk about how much pressure they are under from their families to have a heterosexual marriage.
One man in the club says that when he came out to his family, his brother took him to a strip bar to try to "cure" him.
He says if his family knew he was at a gay nightclub, they'd kill him for "honour".
Honour is still highly prized in Britain's south Asian communities.
Terrible consequences
Many families tell their gay sons and daughters they should keep quiet about their sexuality for the honour of the family.
This can have terrible consequences.
Last week an inquest heard that London doctor Nazim Mahmood, 34, had killed himself after coming out as gay to his family, who told him to seek a "cure".
In April, Jasvir Ginday was given a life sentence for murdering his wife, apparently to stop her revealing his homosexuality.
They had an arranged marriage but the bank worker from Walsall was active on the gay scene.
Then there is the case of Shrien Dewani. 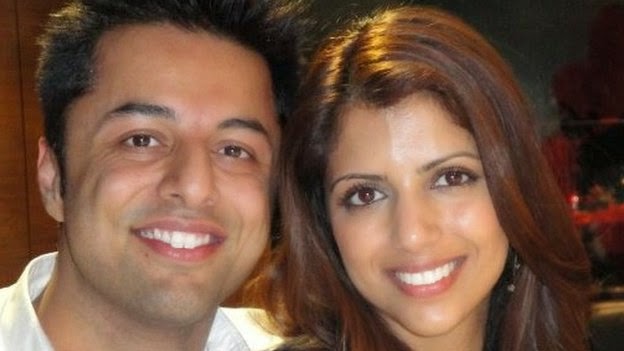 The Bristol businessman had been accused of murdering his wife Anni on their honeymoon in 2010, but a South African court threw out the case on Monday.
The court case revealed that Mr Dewani was bisexual and had been seeing a German male prostitute before his marriage.
Asif Quraishi says the coverage has had a negative impact on the gay community.
He wants something positive to come out of it.
"It highlighted that gay Asians are entering inauthentic marriages," he says.
Not consummated
"Gay Asians need to take responsibility, to use the exposure to question these marriages.
"And, at the same time, the British Asian community needs to recognise that by pressuring their children into these marriages, it leads to mental health problems - and the real victims are the heterosexual partners."
Salma - not her real name - was certainly a victim.
She was forced into marriage to a cousin at 19. He told her on their wedding night he was gay.
"When we were left alone and it was time to go to bed, he said 'Is it alright if I sleep next door because I'm not into women?'," she recalls.
Their marriage was never consummated, but when she left him, she says she was blamed.
Even her own family tried to persuade her to go back, telling her she was a "bad wife". 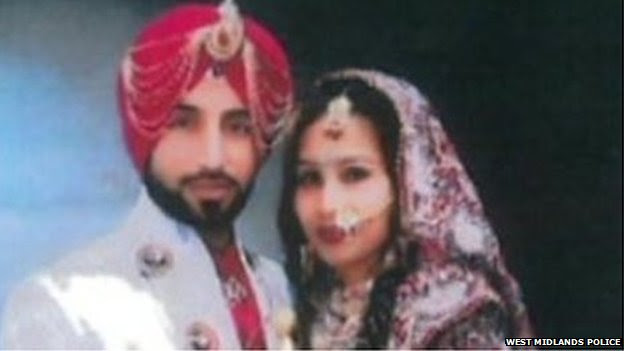 Jasvir Ginday murdered his wife just six months after their wedding
Her mother told her if she "had done everything right, he wouldn't have been gay".
Salma adds: "She said 'You should have touched him, made him have feelings for you'."
The attitude of the south Asian community to homosexuality has even been absorbed by some of the gay and lesbian members within it.
Hrpreet - not his real name - is a married man in his 20s with a young son.
'Life in tatters'
He says that if his child told him he was gay, he'd be upset because being gay is wrong.
And yet Hrpreet calls himself bisexual, and says he prefers having sex with men.
His wife and family don't know that he regularly goes to gay clubs and picks up men.
If they found out, his life would be in tatters, he says.
In a country where gay rights are enshrined in law, for many British Asians so much is still shrouded in secrecy.
And it will remain so until their community accepts them for who they are and understands that marrying someone of the opposite sex is not a “cure” for being gay.

You can watch Katie’s film via BBC iPlayer on the Newsnight website.

BBC
Over 5Million Reads Adam Gonzalez at December 13, 2014 No comments: Links to this post