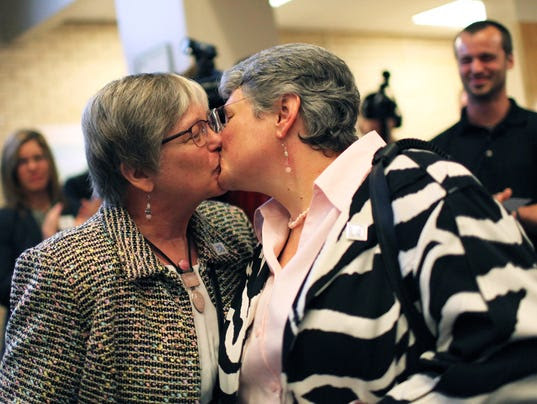 An official in western North Carolina has accepted marriage license requests from 10 same-sex couples, despite a 2012 amendment to the state constitution forbidding such marriages.

Buncombe County Register of Deeds Drew Reisinger said he will hold the licenses and ask state Attorney General Roy Cooper for legal advice. Reisinger said he thinks the state's ban is unconstitutional.
Cooper said Monday that he supports gay marriage. But he has said he'll defend the state's constitutional ban on gay marriage. A spokeswoman for Cooper's office said the marriage licenses cannot be issued.
Brenda Clark and Carol McCrory, a couple who have been together for 25 years, were the first to ask Reisinger for a license Tuesday morning.
Reisinger congratulated them, then said he would ask the attorney general for permission before signing their license.
"I think it's pretty clear that there is a contradiction between state law and federal law, and we want some clarification," Reisinger said.
McCrory praised Reisinger for his courage in accepting their marriage license request. "I'm very proud of you," she said.
The Campaign for Southern Equality has been going from county to county, trying to find someone to issue marriage licenses for same-sex couples as part of its "We Do" campaign.
The Rev. Jasmine Beach-Ferrara, executive director of the Campaign for Southern Equality, called Reisinger's action "another step forward in the path to full equality for LGBT people."
Before the 10 couples applied for marriage licenses Tuesday, Beach-Ferrara and 100 supporters gathered in a downtown Asheville church to encourage them.
Beach-Ferrara said they will keep pressing the issue. She called the state's ban on same-sex marriage "morally wrong."
"You can only deal with this for so long. It wears on your soul. It wears on your spirit, and it's wrong," she said.
Reisinger's announcement Monday that he would accept licenses came hours after an Associated Press story revealed that Cooper said he supports same-sex marriage. But Cooper also said his personal views won't prevent him from defending North Carolina's ban in court.
Cooper is named as a defendant and is the state's lead designated attorney in a lawsuit filed by several same-sex couples that was recently expanded to challenge the constitutionality of the amendment in light of a U.S. Supreme Court decision over the summer.
Thirteen states and the District of Columbia permit same-sex marriages.
This is the second time the Campaign for Southern Equality has targeted Asheville. The bohemian university town in western North Carolina has a large gay and lesbian population.
Two years ago, a same-sex couple was arrested after refusing to leave Reisinger's office when the pair was turned down for a marriage license. The arrests followed a downtown rally that drew about 300 people, where same-sex couples were blessed by clergy members.
Reisinger recalled that protest and said it was now time to take action. He said he told the attorney general's office last week that he was planning to accept marriage licenses from same-sex couples.
But Reisinger said he would abide by the attorney general's ruling.
"If the attorney general says he will not allow me to issue marriage licenses, then I will respect the law of the land. But if he grants me permission to issue these marriage licenses, I will be excited to be the first in the South to make that happen," he said.
USA Today
Over 5.6 Million Reads Adam Gonzalez at October 16, 2013 No comments: Links to this post