I know if he was trying to pick you up you will be running to your car with him on hand. But we are talking about girls here and not New York City or San Francisco girls.


A MAN has filmed a video of himself trying to pick girls up by walking up to them naked on the street.
The latest in a series of escalating YouTube pick up videos is the creatively-titled "Naked Guy Picking Up Girls" by Norwegian man Freddy Fairhair.
Many of his targets awkwardly smile and laugh along as he undresses in front of them. Some even give him their phone number.
"You're cool, I like you," one woman says.
But Mr Fairhair doesn't just ask for numbers - he gives some of the women unasked-for hugs and kisses and even implores one group to look at his boner.
"I'm having a boner. You turn me on. Is it visible? I don't want to look," he says.
In the YouTube video description he says he was inspired by other risk-taking YouTube pranksters Vitaly Zdorovetskiy and Remi Gaillard.
"What a freedom I felt doing this haha!" Mr Fairhair posted.
Many YouTube commenters have congratulated Mr Fairhair on being a "brave man" and posting a "hilarious" video.
But other commenters and websites including Gawker and The Daily Dot have labelled his behaviour "full-blown sexual assault”.

Over 5.6 Million Reads Adam Gonzalez at October 07, 2013 No comments: Links to this post

Email ThisBlogThis!Share to TwitterShare to FacebookShare to Pinterest
Labels: Sweets

How Much Chocolate Does a Nobel Price Winner Need to Consume?

Eating more chocolate improves a nation's chances of producing Nobel Prize winners - or at least that's what a recent study appears to suggest. But how much chocolate do Nobel laureates eat, and how could any such link be explained?
The study's author, Franz Messerli of Colombia University, started wondering about the power of chocolate after reading that cocoa was good for you.
One paper suggested regular cocoa intake led to improved mental function in elderly patients with mild cognitive impairment, a condition which is often a precursor to dementia, he recalls.
"There is data in rats showing that they live longer and have better cognitive function when they eat chocolate, and even in snails you can show that the snail memory is actually improved," he says.
So Messerli took the number of Nobel Prize winners in a country as an indicator of general national intelligence and compared that with the nation's chocolate consumption. The results - published in the New England Journal of Medicine - were striking.
Chocolate consumption and Nobel laureates

"When you correlate the two - the chocolate consumption with the number of Nobel prize laureates per capita - there is an incredibly close relationship," he says.
"This correlation has a 'P value' of 0.0001. This means there is a less than one-in-10,000 probability that this correlation is simply down to chance."
Continue reading the main story 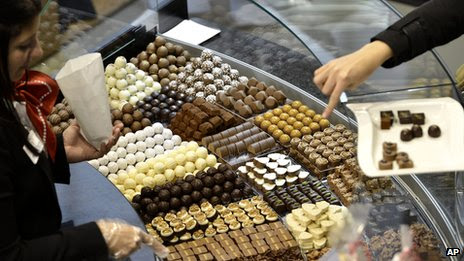 The Swiss eat the most chocolate... and have been rewarded with the most Nobel Prizes, per head of population
"Or the other option is that the Swedes are excessively sensitive and only small amounts stimulate greatly their intelligence, so that might be the reason that they have so many Nobel Prize laureates."
We conducted our own, entirely unscientific, survey to ascertain just how much chocolate Nobel laureates ate.
Christopher Pissarides, from the London School of Economics, reckons his chocolate consumption laid the foundations for his Nobel Prize for Economics in 2010.
"Throughout my life, ever since I was a young boy, chocolate was part of my diet. I would eat it on a daily basis. It's one of the things I eat to cheer me up.
"To win a Nobel Prize you have to produce something that others haven't thought about - chocolate that makes you feel good might contribute a little bit. Of course it's not the main factor but... anything that contributes to a better life and a better outlook in your life then contributes to the quality of your work."
However, Rolf Zinkernagel - the largely Swiss-educated 1996 Nobel Prize winner for medicine - bucks his national trend. 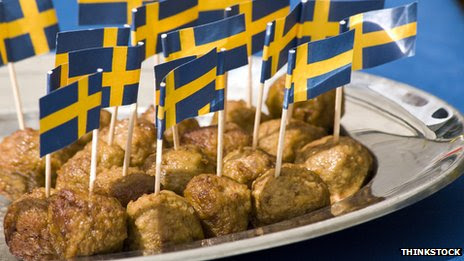 Swedes eat only half as much chocolate as Germans but the country has twice as many Nobel laureates per head... perhaps it's down to the meatballs?
"I am an outlier, because I don't eat more than - and never have eaten more than - half a kilogram of chocolate per year," he says.
Continue reading the main story
Robert Grubbs, an American who shared the Nobel Prize for Chemistry in 2005, says he eats chocolate whenever possible. "I had a friend who introduced me to chocolate and beer when we were younger. I have transferred that now to chocolate and red wine.
"I like to hike and I eat chocolate then, I eat chocolate whenever I can."
But this is a controversial subject.
Grubbs' countryman, Eric Cornell, who won the Nobel Prize in Physics in 2001, told Reuters: "I attribute essentially all my success to the very large amount of chocolate that I consume. Personally I feel that milk chocolate makes you stupid… dark chocolate is the way to go. It's one thing if you want a medicine or chemistry Nobel Prize but if you want a physics Nobel Prize it pretty much has got to be dark chocolate."
But when More or Less contacted him to elaborate on this comment, he changed his tune.
"Now I ask that the media kindly respect my family's privacy in this difficult time."
"I deeply regret the rash remarks I made to the media. We scientists should strive to maintain objective neutrality and refrain from declaring our affiliation either with milk chocolate or with dark chocolate," he said. 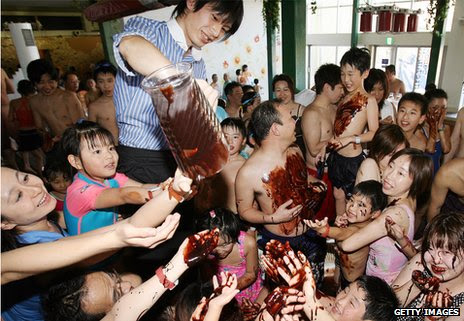 But while the Japanese clearly enjoy a cocoa-based snack, their chocolate consumption is relatively low - as is their Nobel Prize haul
It might surprise you that we are trying to make a serious point. This is a classic case where correlation, however strong, does not mean causation.
Messerli gave us another example. In post-war Germany, the human birth rate fell along with the stork population. Were fewer storks bringing fewer babies?
The answer was that more homes were being built, destroying the storks' habitat. And the homes were small - not the sort of places you could raise a large family in.
"This is a very, very common way of thinking," he says.
"When you see a correlation, you do think there is causation in one way or another. And in general it's absolutely true. But here we have a classic example where we cannot find a good reason why these two correlate so closely."
BBC
Over 5.6 Million Reads Adam Gonzalez at November 17, 2012 No comments: