Pornographic images found at Pompeii could help us understand religious attitudes to sexuality, a prominent Christian has argued.
Thousands were killed when molten rock, volcanic ash, and deadly gases engulfed the Roman town in a fiery eruption that lasted two days when Mount Vesuvius erupted back in 79 A.D.
Archaeologists are continuing to make discoveries at the site of the blast, including artwork displaying sex acts between members of the same sex.
Rev. Steve Chalke, a campaigner for LGBT+ acceptance in the Church of England, has delivered a talk explaining how these discoveries could help us understand the context of the Bible, as reported in Indy100.

Wikimedia
Chalke says that homosexual sex was common in Roman times: “In Rome sex was an important thing. If you were a man you were expected to have sexual playthings apart from your wife. Your wife was to pass on the family line but you would have a mistress, a concubine, a boy that you would have sex with as well and all of that was expected. It was normal, it wasn’t frowned upon and it was written about.”
He argues that the Bible passages that chastise homosexual acts are misinterpreted, as gay sex was only taboo when it was between two members of the same class. “What you weren’t allowed to do, under any circumstance,” Chalke says, “was to have sex with another Roman. Roman citizens were protected. You could only have sex with someone of a lesser status, with a slave or a gladiator.”

Basically, Roman men could have sex with guys all they liked, as long as the men were of a lower class.
Earlier this year, scientists made a surprising discovery about Pompeii’s famous embracing couple.
Dubbed “The Two Maidens,” the two bodies were found hugging in their final moments as they were covered by molten rock and ash.

For years, it was believed that the two bodies were both women – but new research has discovered that they’re actually both men.
Aged between 18 and 20, the men weren’t related, and are positioned in such a way that it’s now speculated they were lovers who shared an embrace in their final moments alive.

Over 5Million Reads Adam Gonzalez at July 23, 2017 No comments: Links to this post 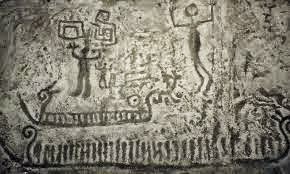 Humans started making art work when their personalities got gentler and their faces more feminine, a study suggests.
Researchers found that culture boomed around 50,000 years ago when there was an apparent reduction in testosterone.
This led people to have gentler personalities and saw the making of art and advanced tools become widespread.
The new study, published in the journal Current Anthropology, found that human skulls changed in ways that indicate a lowering of testosterone levels at around the same time that culture was blossoming.
The study’s lead author Robert Cieri, a biology graduate student at the University of Utah in the United States, said: “ he modern human behaviors of technological innovation, making art and rapid cultural exchange probably came at the same time that we developed a more cooperative temperament."

The study, which is based on measurements of more than 1,400 ancient and modern skulls, makes the argument that human society advanced when people started being nicer to each other, which entails having a little less testosterone in action.
Heavy brows were out, rounder heads were in, and those changes can be traced directly to testosterone levels acting on the skeleton, according to Duke University anthropologist Steven Churchill, who supervised Cieri's work.
What they can't tell from the bones is whether these humans had less testosterone in circulation, or fewer receptors for the hormone.
The research team also included Duke animal cognition researchers Brian Hare and Jingzhi Tan, who say this argument is in line with what has been established in non-human species.
In a study of Siberian foxes, animals that were less wary and less aggressive toward humans took on a different, more juvenile appearance and behaviour after several generations of selective breeding.
Dr Hare, who also studies differences between our closest ape relatives - aggressive chimpanzees and mellow, free-loving bonobos, said: "If we're seeing a process that leads to these changes in other animals, it might help explain who we are and how we got to be this way.
He said chimps and bonobos develop differently, and they respond to "social stress" differently. Chimpanzee males experience a strong rise in testosterone during puberty, but bonobos do not. When stressed, the bonobos don't produce more testosterone, as chimps do, but they do produce more cortisol, the stress hormone.
He said their social interactions are profoundly different and their faces are different, too.
Dr Hare added: "It's very hard to find a brow-ridge in a bonobo."
Cieri compared the brow ridge, facial shape and interior volume of 13 modern human skulls older than 80,000 years, 41 skulls from 10,000 to 38,000 years ago, and a global sample of 1,367 20th Century skulls from 30 different ethnic populations.
The trend that emerged was toward a reduction in the brow ridge and a shortening of the upper face, traits which generally reflect a reduction in the action of testosterone.
There are a lot of theories about why, after 150,000 years of existence, humans suddenly leapt forward in technology. Around 50,000 years ago, there is widespread evidence of producing bone and antler tools, heat-treated and flaked flint, projectile weapons, grindstones, fishing and birding equipment and a command of fire.
The study argues that living together and cooperating put a premium on agreeableness and lowered aggression and that, in turn, led to changed faces and more cultural exchange.
Cieri added: "If prehistoric people began living closer together and passing down new technologies, they'd have to be tolerant of each other.
“The key to our success is the ability to cooperate and get along and learn from one another."
telegraph.co.uk
Over 5Million Reads Adam Gonzalez at August 04, 2014 No comments: Links to this post