Fredrick Brennan created the site in 2013, when he was just 19. To understand how a person could be angry enough to create a place like 8chan, you have to understand his life. Brennan has osteogenesis imperfecta, a congenital disease that makes bones curved and weak. He’s broken a bone at least 100 times and has spent most of his life in a wheelchair, finding escape on the internet — 4chan especially.
“When I started using 4chan heavily, my whole life became about the internet,” Brennan told VICE News. “And my real life stopped mattering to me.”
Eventually he dreamed up 8chan — basically 4chan, but with even fewer rules. The site was a modest success. But then the misogynistic Gamergate movement skyrocketed its popularity.
“I looked at Gamergate very cynically,” Brennan said. “I didn’t care about the ethics. And I didn’t care about the women ... I just cared that this is bringing users to my site.”
Brennan sold the site in 2014 and moved to Manila — where he could afford in-home care — but stayed on with the company that owns it through 2018. He began denouncing his creation earlier this year after a gunman killed 51 people in two New Zealand mosques after posting a white supremacist manifesto on 8chan.
And after the El Paso shooting in August, Brennan called for the site to be deleted forever. Trolls swept in; they tried to post his address, and sent him images of him being pushed down the stairs.
“I didn't create online harassment,” Brennan said. “This has all been going on way before I came of age, but in a way, I kind of deserve it, don't you think?”
Over 5Million Reads Adam Gonzalez at September 06, 2019 No comments: Links to this post

Online Dating is a "Horrific Den of Humanity"

Meet Jacob, a thirtysomething, single Portlander on the prowl. He describes himself as “average-looking.” Girlfriends have called him “lazy, aimless, and irresponsible with money.” He doesn’t care much about “a solid credit score,” “a 40-hour workweek,” or settling down. Thanks to online dating sites, Jacob pursues dates with “one or two very pretty, ambitious women a week.” He recently ended a two-year relationship with a 22-year-old; he’s currently juggling flings with “a paralegal and a lawyer who work at the same law firm, a naturopath, a pharmacist, and a chef.”

Jacob, as Atlantic writer Dan Slater frames him, is the embodiment of a new dating market where the allure of “online romance is threatening monogamy.” Whenever he meets another woman online, Jacob (not his real name) thinks: “This person could be exclusively for me, but so could the other two people I’m meeting this week.” Why have a real relationship, Slater asks, when there are so many attractive, successful partners waiting online?
I don’t know—maybe because we're not all aimless and lazy thirtysomething straight dudes? Jacob may be meeting a buffet of sexy professionals and college students through his online dating profiles, but those women are meeting … Jacob. Slater doesn’t interview the paralegal, the lawyer, the naturopath, the pharmacist, the chef, or the twentysomething about their experiences dating online. They might speak to an alternate narrative of online dating: This Jacob could be exclusively for me, but so could the other two Jacobs I’m meeting this week—Oh, God. Why settle down when there are so many other unsuccessful, unattractive partners with whom you could make a horrific, lifelong mistake?
Alexis Madrigal has already administered a takedown of Slater’s central assertion that online dating has turned plugged-in yuppies into commitment-phobes. Marriage will live on, no matter how valiantly Jacob scams on women. I’m actually glad to finally hear from a Jacob, the male counterpoint to Kate Bolick’s own Atlantic examination of “All the Single Ladies” who end up paired, impermanently, with guys like him. The problem is that, unlike Bolick, whose story of singledom is intrinsically tied to her gender, Jacob scoots by in this story with no examination of his maleness. Slater relegates gender to a parenthetical: “Gender, too, may play a role.” Then, he fails to interview a single woman in the piece. Instead, he presents as evidence quotes from male online dating executives who say stuff like, “I often wonder whether matching you up with great people is getting so efficient, and the process so enjoyable, that marriage will become obsolete.”

Let us set aside the bizarre assertion that marriage has survived until now, as an institution, because it is so fun and that anything that is more fun threatens its very existence. Let us instead examine this notion that online dating is an "enjoyable" experience. My own stint dating online produced: one date with a guy who believes he is haunted by ghosts; three messages from a man who ended the series by writing, “P.S.: you're so fucking hot i would lick the poop out of your butthole just to touch your ass”; an aggressive messenger I never met but have twice had to stealthily avoid when ducking into my local Trader Joe’s; bland drinks with perfectly OK dudes; many Jacobs.
No, online dating is not a joy. It is a horrific den of humanity that sometimes seems even less fun than actually being married. But it is kind of funny and interesting, mostly because it throws the offline dating economy into stark relief. Jacobs exist in real life, too, staring glaze-eyed at women a decade their junior from across the sports bar. Paging through all of their photos, assembled in one place, never made me feel like my world was teeming with compatible singles. Maybe that’s because I’m a woman, or maybe because, like most men and women who are not Jacob, I'm looking for a little more compatibility than “inexperienced person who will agree to watch sports and have sex with me.” Jacob may view online dating as an endless font of nubile young women to invite into his hovel (for a time), but I see it more as a reminder that a good person is hard to find, off or online. Either way, I think that most people are unlikely to conclude, “I like him, but wait—there are so many other quality men waiting for me … online.”
slate.com

Over 5Million Reads Adam Gonzalez at January 07, 2013 No comments: Links to this post

When Men and Women Turn to the Net } They Get KINKY!

In Love & Sex by Jeffery Racheff 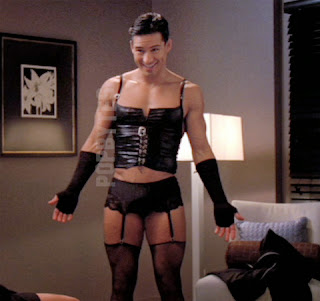 When the world goes online, it gets kinky. A massive new study looking at over a billion internet searches from all over the world reveals a surprising portrait of what turns humans on when they log on.
Read: Men Are More Likely to Say 'I Love You' First
In what is being called one of the largest surveys of human desire ever conducted, authors Ogi Ogas and Sai Gaddam have looked at data from a billion anonymous internet searchs, a million erotic videos and a million pornographic sites.
The results give a snapshot of what people are looking for when they're feeling randy on the internet.
Read: Nirvana Fans More Likely to Have Sex on First Date
Using data collected from Google, Yahoo and Bing, the authors discovered these top search terms related to sex:
1. Youth (13.5%)
2. Gay (4.7%)
3. MILFs (4.3%)
4. Breasts (4%)
5. Cheating wives (3.4%)
6. Vaginas (2.8%)
7. Penises (2.4%)
8. Amateurs
9. Mature
10. Animation
Read: Sex in Space Needs to Be Studied, Say Perv Scientists
Also revealed in the study:
- Straight men are are more likely to search for heavier women, and often find feet sexy.
- Straight women are not as easily turned on as men (duh), and enjoy watching and reading about two men as long as the focus is on emotion and not sex.
- Both straight and gay men have the same favorite body parts: chest, butt then feet (in that order).
Researchers believe the study, which is published in the new book 'A Billion Wicked Thoughts,' will allows people to recognize that what they might perceive as a shameful perversion is actually a desire shared by many others.

Over 5Million Reads Adam Gonzalez at December 15, 2011 No comments: