Impeachment isn't fun.
Bob Inglis is a former Republican representative from South Carolina. He compiled a conservative record in the House, where he was a member of the Judiciary Committee and voted in 1998 to impeach President Bill Clinton.   By

Francis Wilkinson
But Inglis deviated from conservative orthodoxy in a couple instances, including his acknowledgment of the connection between carbon emissions and climate change. He was defeated in a 2010 GOP primary by Trey Gowdy, who ran as a conservative purist.

Last week, Inglis tweeted that if President Donald Trump were a Democrat, House Speaker Paul Ryan would be "inquiring into impeachment" over Trump's efforts to thwart the investigation into his Russia ties. 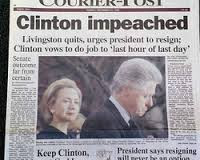 Clinton was impeached not by doing anything that helped him or hurt the nation. He was impeached by lying under oath when he was asked "Have you ever had sex whith that women?" Anwer from Pres. Clinton: "It all depends what your definition of sex is."

Ok, stop laughing but that is history. The Republicans could not help themselves to do something that it has never been done under the same circumstances. The GOP was pissed but of course, it was not about him not giving an honest answer but were angry at the sex part. The said so. "Sex in the oval office" Deplorable!  Clinton was acquited and the Gop paid the price at the ballot box.
~~~~~~~~~~~~~~~~~~~~~
Republicans went after a 2 term President that had been overwhelmingly elected by the American people and had a high percentage of approval.

I spoke with Inglis, via email, over the weekend. Here is a lightly edited transcript:
WILKINSON: I'm interested in how your Clinton history informs or doesn't, your perspective on questions about President Donald Trump's actions regarding Russia and the investigation into his campaign and business ties. Looking back, was it a good idea to impeach Bill Clinton?
INGLIS: In retrospect, the underlying substance of the Clinton matter seems far less consequential that what we are dealing with now. Clinton had sex with a White House intern. He got impeached for lying about it as he tried to cover it up. Richard Nixon participated in a burglary. He nearly got impeached (resigning instead) for obstructing justice in an attempt to cover it up.
The matter involving President Trump goes to the heart of our Republic: A hostile power attempted to influence the 2016 election. As former FBI Director James Comey said several times in his testimony last week, if any Americans participated in that attack, it is a very big thing.
WILKINSON: That casts Trump's situation as the most egregious. But impeachment is a dramatic step with the ugly fallout. In retrospect, was it worth impeaching Clinton?
INGLIS: No.
WILKINSON: Does what we know so far of Trump's actions regarding Russian interference and potential obstruction or abuse of power cross an impeachment threshold? Don't we need more information?
INGLIS: We need more information. And all of us, Republicans and Democrats and Independents, should be ready to support a vigorous investigation with no minimizing of its import. Senator Marco Rubio, for example, should not have downplayed the import of the word "hope" in the directive President Trump gave to Director Comey to drop the Flynn investigation. Yes, Senator Rubio, "hope" can be a threat: "Nice car you got there, Senator. Hope nothing bad happens to it while you're having dinner at that restaurant."
WILKINSON: Republicans -- Rubio seems typical -- are still very much in defensive mode, seeking to limit damage to the president. Republicans in the House, in particular, would surely bury any investigations into Trump if they could. Why and how would that defensive posture change?
INGLIS: Things will change for Republicans when we convince Trump supporters to be thankful for where we are and hopeful for the future. As it is, we’ve been mimicking Trump’s resentments. We’ve embodied his fear of the future, looking back with him and them to some good old days that never existed. Those Trump supporters comprise perhaps 38 percent of the American people. They’ve been captured by his message of grievance. They are the dominant force in Republican primaries. They are the reason that Senator Rubio, for example, adopted a minimizing, dismissing and excusing mode in his questioning of Comey. That 38 percent prevents Republicans from pursuing a range of things -- from cooperating with a full-bore investigation of Russia’s attack on our election to crafting workable solutions on health care, to working on free-enterprise solutions to climate change.
The 38 percent is driven by Fox & Friends’ elevation of commercialism over journalism, by the populist demagoguery on talk radio, by the ossification of the editorial pages of the Wall Street Journal and by the funding of the Koch brothers. That 38 percent can kill you in a Republican primary, which is why elected Republicans are terrified of those voters. Ultimately, they will kill the Republican Party itself, and people who would have been open to conservative solutions will be driven away from the GOP for a decade or more.
WILKINSON: So do you believe Trump's support among the congressional GOP is solely a function of that core group of Trump voters? That without those voters the Congress would be moving to aggressively investigate Trump and potentially remove him from office?
INGLIS: If not for that 38 percent, congressional Republicans would be pursuing the Russia investigation aggressively. If some connection were found between Trump and the Russian attack, congressional Republicans would impeach him.
After that, we could develop policies to address the legitimate concerns of the 38 percent and others -- globalization, automation, the impending decline of the car and its effects on suburban lifestyle, and the rapid pace of cultural change.
WILKINSON: So you think Republicans would impeach Trump if there were proof of collusion? What about anything short of that standard? (For example, abuse of power or obstruction of justice.) Given partisan polarization and the GOP's interest in self-protection, wouldn't it take an almost worst-case scenario for the party to abandon Trump?
INGLIS: Trump's personal collusion with the Russians, if proven, would cause Republicans to remove him from office. If Trump didn't personally collude but sought to protect those who did (family members or campaign folks), removal would depend on the egregiousness of the collusion. If it were egregious, I think they might remove him.
WILKINSON: When you talk with former GOP colleagues, do they register Trump as a danger to democracy and threat to U.S. national security? Or do they simply view him as an unconventional politician in generally benign ways?
INGLIS: When I talk with them, it's apparent that the concern is with the Trump voters more than with Trump himself.
WILKINSON: Meaning that they think Trump himself is a viable, functional president? Or are you saying that they think otherwise but fear the wrath of his voters?
INGLIS: Without a doubt, the latter.
Bloomberg
Over 5Million Reads Adam Gonzalez at June 14, 2017 No comments: Links to this post Donald Trump has been president for about a month. And already, a sizable majority of Democrats say he should be impeached.
A new poll from the Public Religion Research Institute shows 58 percent of Democrats are onboard with the idea of impeaching Trump.
That's not an unthinkable number in our polarized political climate, but it is extraordinarily early in a presidency for such a high level of support for impeachment. As PRRI notes, as late as 2014 — in the sixth year of Barack Obama's presidency — a similar proportion of Republicans supported impeachment: 56 percent. And even as the case for the Iraq War was being picked apart in 2006, Democratic support for impeaching George W. Bush was only at 48 percent — lower than it is today for Trump. Overall support for Trump's impeachment (27 percent) is still slightly lower than it was for Obama in 2014 (30 percent) and Bush in 2006 (30 percent). But the support for impeachment among Democrats appears to be what is keeping the overall number for Trump in the same ballpark.
It's a testament to just how insatiable Democrats' appetite is for opposing Trump — something we've seen in other polling as well. A Pew poll this week showed 72 percent of Democrats were more worried their leaders would do too little to oppose Trump vs. 20 percent who were worried they would do too much.

And according to this new poll, the vast majority of that 72 percent doesn't think impeaching Trump — even at this early juncture — is going too far. That’s not exactly a recipe for bipartisanship going forward.
The grounds for impeaching Trump or any other president, it bears noting, are laid out in the Constitution, which says a president “shall be removed from Office on Impeachment for, and Conviction of, Treason, Bribery, or other high Crimes and Misdemeanors.”
Democratic Sen. Al Franken of Minnesota recently joked that such a situation was “months and months away,” since Republicans control Congress and would have to support impeachment. And that's a key point: Congress is always reluctant to move toward impeachment — especially since it can backfire, as it did late in Bill Clinton's presidency. But in the case of Trump, it’s even more unlikely given Republicans control the House, which would initiate any impeachment proceedings if it got to that point.
Some Democrats and ethics groups have sued alleging Trump is already in violation of the law — specifically, the emoluments clause, which prohibits a politician from accepting any “present, Emolument, Office, or Title, of any kind whatever, from any King, Prince, or foreign State.” (The Post's Allison Michaels and David Fahrenthold have much more on this in this week's version of the “Can He Do That?” podcast.)
And there already are very real grass-roots efforts to push for impeachment. A petition with 850,000 signatures on it was delivered to Congress last week. And Democratic leaders are trying to beat back the growing calls for impeachment from their base.
Good luck with that.
Aaron Blake
washingtonpost.com
Over 5Million Reads Adam Gonzalez at February 24, 2017 No comments: Links to this post