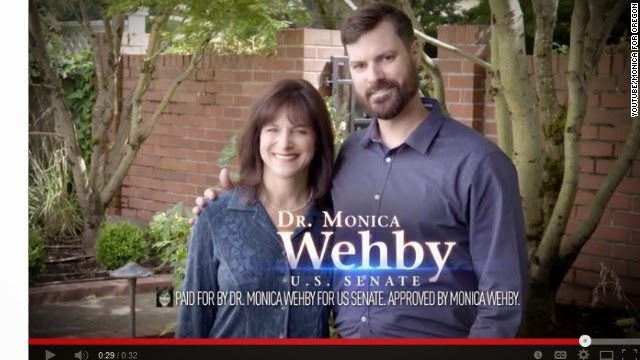 The gay Oregon man who helped overturn the state's decade-old ban on same-sex marriage is featured in a campaign ad for a Republican Senate candidate -- and he now finds himself on the receiving end of some criticism from LGBT activists.
Ben West and his husband, Paul Rummell, became high-profile figures in Oregon’s gay rights community this year when they challenged the state's voter-approved ban on same-sex marriage and won.

Now West is backing Monica Wehby, the Republican nominee and same-sex marriage supporter who's challenging Sen. Jeff Merkley, a Democratic incumbent with a long record of fighting for LGBT rights.
It wasn't too big of a surprise that Wehby is unveiling her support for same-sex marriage.
Court strikes down same-sex marriage ban Church changes its marriage definition Virginia's ban is overturned
"This is Oregon. This is not Texas," Republican strategist Ford O'Connell said, referring to the state's liberal tendencies. “I don't see a political risk."

It was, however, a big step for West and his husband to lend their names to Wehby's campaign.
While many of West's friends and acquaintances have been respectful and even happy with his decision, he said, some have been "shocked." His Facebook page shows a sampling of the disagreements. Some simply can’t fathom electing a Republican, while others say they have a hard time buying Wehby's position.

"Where was she earlier this year when we were 'fighting the fight'?" one person wrote, referring to the legal challenge against the state's law. "But now that it's over and she doesn't want to be on the 'wrong side of history', she is supportive, or says that she is."
Still, others are dismayed that West would not support Merkley, a senator that one person described as “a point of pride for Oregon."

"I am deeply saddened by the public stance that you have taken against one of the gay community's champions in DC," another person wrote. "I hope you will recant your position."
Judge strikes down Florida's same-sex marriage ban
Jeana Frazzini, executive director at Basic Rights Oregon, a group that worked actively in the challenge against the state’s same-sex marriage ban, said she can't speak for West and Rummell, adding the "LGBT community is politically diverse and we can't expect 100% agreement on every issue or candidate."

She went on to laud Merkley and question Wehby's record on same-sex marriage. Democrats point to previous comments when Wehby didn't take one position or the other on same-sex marriage, saying mostly that it's an issue that should be left to the states.
The ad causing the stir

In the 30-second television spot released Tuesday by Wehby's campaign, West looks directly into the camera and talks about how marrying his partner "was the happiest day" of his life. But he cautions there's still "a lot of work left to do" in the national push for same-sex marriage.
"Whether it's standing up for equality or for the unemployed or for the next generation, we need leaders who have the courage to do what's right," he continues. "That's why I support Monica Wehby. I know she'll fight for every Oregon family, including mine."
At the end of the ad, which was first reported by Politico, West and Wehby stand next to each with their arms around each other, smiling.

In a written statement, Wehby said she's "proud and humbled" to have the endorsement of West, a Republican, and his husband, a Democrat. "Their courage to stand up for their family, and against inequality, is inspiring and embodies the spirit I will serve with as Oregon's next senator," she said.
Supreme Court: No same-sex marriage in Virginia, yet
West and Rummell reached out to Wehby's campaign shortly after she became the GOP nominee and got to know her over a coffee date and a long visit to her house. While Rummell had some serious doubts at the beginning, West said they eventually decided to "go out on a limb" and endorse her because they believed she was an overall better candidate than the incumbent senator.
Citing their role in Oregon's gay rights world, West described the decision as "very difficult."
"It's not easy to get the blowback when yesterday you were the darling of the community," he said. "But we're acting with conviction in our hearts, and I'm not going to apologize for that."
A blueprint for the future?

While it wasn't a big risk in Oregon, the spot was certainly an uncommon move on the national level. Only four current GOP members of the U.S. Senate support same-sex marriage.
But Wehby, a pediatric neurosurgeon, trails Merkley by double digits. While her race has become more competitive than expected, political observers still rate it as a likely Democratic seat. Experts say she needed to make a splash to keep the pressure on.
“It seemed like a powerful, daring and bold move, but it also seems very wise given the landscape of Oregon," said O'Connell.

Judges hear four states defend same-sex marriage bans
As polls continue to show increasing support for same-sex marriage, O'Connell argued Republicans will be paying close attention to the outcome in Oregon. "Depending on how this turns out for Wehby, this could be a blueprint for how Republicans could move forward," he said.
Advocates for traditional marriage, however, have vowed to stop any momentum Wehby may gain from the ad.

"I think she's committed suicide politically," said Frank Schubert, the political director for National Organization for Marriage. He blasted her for supporting West and Rummell, calling their lawsuit a major insult to the voters who backed the amendment in 2004.
Schubert said his group is beginning to put together its plan to go after Wehby, adding that they're prepared to spend money in the state.
“Our organization will certainly urge Oregonians to refuse to vote for her,” he said saying they'll make sure people know she's not only in favor of same sex-marriage, but "she is in favor of the courts invalidating their votes."

By Ashley Killough, CNN
Over 5Million Reads Adam Gonzalez at September 12, 2014 No comments: Links to this post