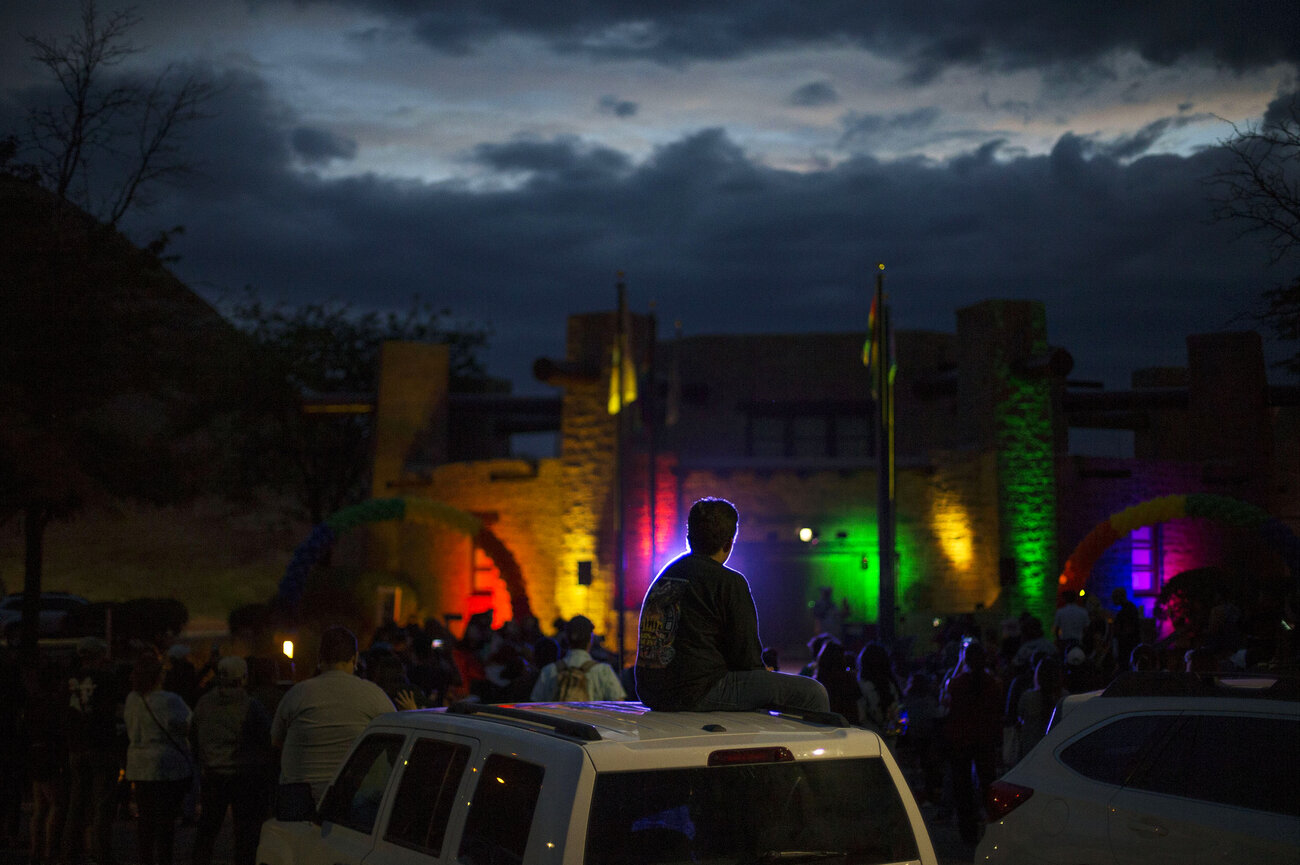 As the sun dips below the horizon, the colored lights turn on — bathing the Navajo Nation Council Chambers in rainbow hues as the crowd cheers.

On June 28, the Navajo Nation kicked off Diné Pride, a two-day event in Window Rock, Ariz., the capital of the Navajo reservation. 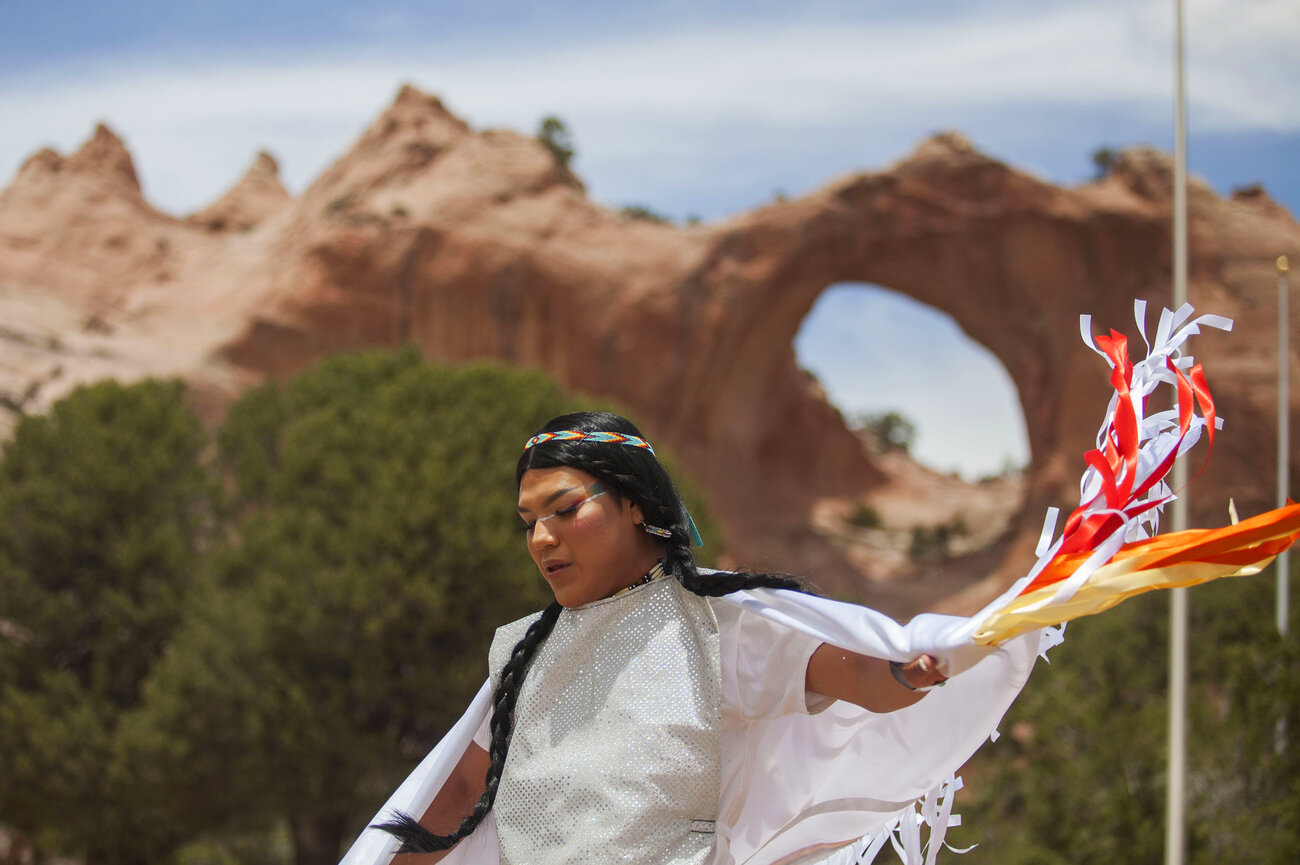 Geronimo Louie dances in a rainbow-themed shawl in front of the Window Rock park at Diné Pride. Half Navajo and half Apache, Louie spoke about the experience coming out as gay within those two cultures.

Diné Pride coincided with the 50th anniversary of the Stonewall riots when patrons at a historic gay bar in New York City fought back against violent police raids in 1969. The protests are widely credited with springboarding the modern gay civil rights movement in the U.S.

Why We Remember Stonewall
50 YEARS AFTER STONEWALL 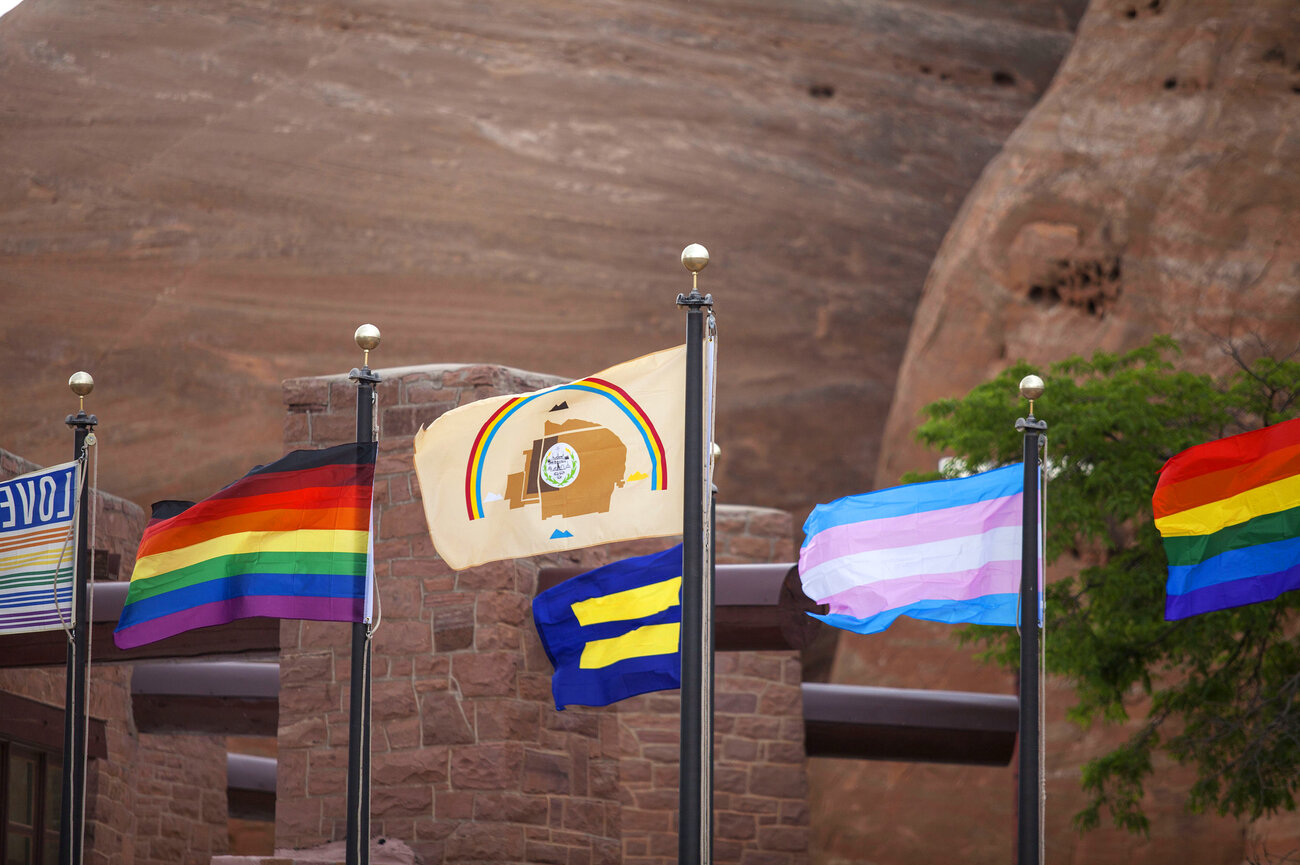 This year's Diné Pride is infused with that history, themed Sacredness Before Stonewall — focusing attention on honoring transgender women of color and their history in indigenous culture.
"Since our creation, the Diné people have acknowledged and revered LGBTQ and especially the trans community in our leadership," said Alray Nelson, founder of Diné Equality and board member for Diné Pride. "Our theme, Sacredness Before Stonewall, is just a way that we are decolonizing and indigenizing Pride for us."
During a panel discussion on visibility for indigenous trans people, Mattee Jim discussed her dual identities: "I am Diné first and foremost. I am of my people," she said. "A lot of our traditional teachings from precontact have been lost to westernization and Christianization."

Currently, there are no anti-LGBTQ discrimination laws on the reservation, and same-sex marriage is illegal, per the 2005 Diné Marriage Act. Beyond the rainbow colors and drag performances was a core theme of returning to traditional Diné teachings about identities that would roughly be considered LGBTQ in contemporary Western culture, specifically transgender people.
Jim and other speakers throughout the weekend referenced the traditional Navajo story of the nádleehi. In this story, First Man and First Woman were at odds, causing men and women of the world to split into separate camps. The nádleehi were a third gender.

According to the story, the nádleehi stayed with First Man, performing traditionally feminine tasks. They were essential in bridging the divide between First Man and First Woman, bringing peace to the land.

The Navajo language includes references to at least four genders: asdzààn, a feminine female; hastiin, a masculine male; dilbaa, a masculine woman; and nádleehi. For indigenous LGBTQ people throughout North America, the term Two-Spirit has gained some popularity as an umbrella term recognizing the third gender and the beliefs associated with it.

"Before Europeans came, we were considered sacred people because we had strong medicine. Because we carried the spirit of both male and female, so we were very honored along with medicine people," says Oriah Lee, who identifies as Two-Spirit Diné. "That tradition has disappeared because it is so Christianized here."

On Saturday, the highlight was the marriage of Ophelia Shondee and Bonnie Gillespie. Shondee is Diné from Ganado, Ariz., and wanted to be married in her homeland. 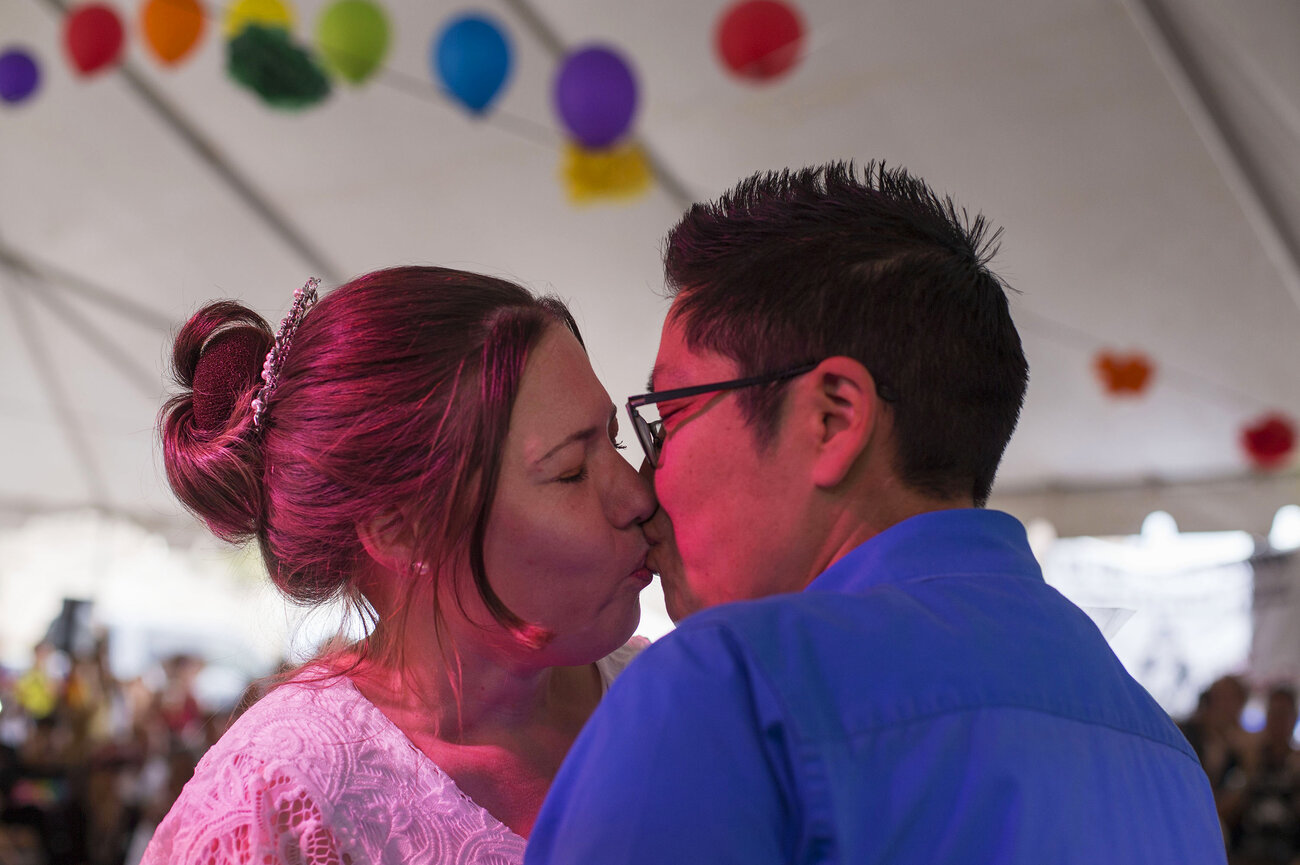 Although their ceremony was performed in Window Rock, the couple had to get their license through an Arizona court off the reservation.

Over 5Million Reads Adam Gonzalez at July 13, 2019 No comments: Links to this post