I Cannot Support This Candidate Brett Kavanaugh, He Lied Under Oath 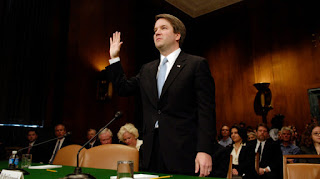 Patrick Leahy, a Democrat, represents Vermont in the U.S. Senate.
Last week, I uncovered new evidence that Supreme Court nominee Brett M. Kavanaugh misled the Senate during his earlier hearings for the D.C. Circuit Court by minimizing and even denying his involvement in Bush-era controversies. I gave him the opportunity to correct his testimony at his hearing last week; he chose instead to double down.
I make no claim that Kavanaugh is a bad person. But when his prior confirmation to our nation’s “second highest court” was in jeopardy, he repeatedly misled the Senate when the truth might have placed that job out of reach.
Take his relationship with the ringleader of the “Memogate” scandal. Between 2001 and 2003, two Republican staffers regularly gained unauthorized access to the private computer files of six Democratic senators, including mine, taking 4,670 files on controversial judicial nominees.
Kavanaugh was asked more than 100 times about this scandal in 2004 and 2006. He testified repeatedly that he knew nothing about the source of the information; that he received nothing that even appeared to be prepared by Democratic staff; and that he never suspected anything unusual, or “untoward.”
But emails I released last week show that then-Republican Senate Judiciary Committee counsel Manuel Miranda regularly shared obviously ill-gotten, inside information with Kavanaugh, which Miranda often asked be kept secret.
That includes eight pages from a Democratic memo, taken verbatim from me, on a controversial nominee that Kavanaugh was asked to not forward. Emails also show that Miranda told Kavanaugh about a sensitive, private letter that I received on a nominee’s position on abortion — a letter Miranda described as “confidential,” requesting that “no action be taken.” They also show Miranda asked to meet privately at his home to give Kavanaugh “paper” on Democratic senators’ thinking.
Other emails describe meetings we were holding, materials staff were sharing internally, leads we were pursuing, what staffers were advising their senators with the notation “highly confidential,” a private letter I had sent to another senator, and even one from an associate of Miranda with the subject line “spying” with information from a Democratic “mole.”
Last week, when confronted with these emails, Kavanaugh testified that this was normal information shared with “friends across the aisle.” As I told Kavanaugh then, I was born at night, but not last night.
I have served in the Senate for 44 years, including 20 years as the top Democrat on the Judiciary Committee. It has never been normal to obtain sensitive, inside information from the opposing party, conveyed in secret and in real time involving the most contentious issues before our committee. A smart political operative on the frontlines of these battles would have seen these glaring red lights for what they were: clear evidence of nefarious acts.
And that’s not all. In 2004, Sen. Ted Kennedy (D-Mass.) asked about Kavanaugh’s role in vetting U.S Court of Appeals for the 11th Circuit nominee William Pryor. Pryor had called Roe v. Wade a constitutional “abomination” and argued that a right to same-sex intimacy would “logically extend” to “necrophilia, bestiality, and pedophilia.”
Kavanaugh distanced himself from Pryor. He denied any part in vetting him, testifying that it was “not one that [he] worked on personally.” Yet emails suggest that Kavanaugh not only recommended Pryor for the seat, he also participated in a working group on the nomination, talked to a reporter about him and appears to have interviewed him.
There are similar concerns that Kavanaugh misled the Senate about his work on other controversial nominations, including William Haynes, who helped develop immoral George W. Bush-era interrogation policies, and Charles Pickering, who reduced the sentence of a man who burned a cross in front of an interracial couple’s house. Kavanaugh might have also misled the Senate by denying any involvement with detainee policies or any knowledge of documents related to a warrantless surveillance program.
Time and again, Kavanaugh appears to have misled the Senate under oath.
Just as troubling is that there is still much we do not know. With the rush to confirm Kavanaugh, the Senate has vetted only 7 percent of his White House record. And Republicans are intent on keeping the rest hidden. On Thursday, Republicans repeatedly blocked subpoenas that would have answered these questions. And the White House is withholding an outrageous 102,000 pages of records, the “most significant portion” of which relates to judicial nominations. The chance that these records do not contain evidence relevant to Kavanaugh’s truthfulness under oath? Approximately zero.
Compare this process to the Elena Kagan nomination: As chairman of the Judiciary Committee, I worked with then-ranking Republican Jeff Sessions to obtain 99 percent of Kagan’s White House records. President Barack Obama did not assert privilege over a single document.
Over four decades, I have voted for more Republican-nominated judges — including Chief Justice John G. Roberts Jr. — than the vast majority of Republicans. I do my best to evaluate each on the merits. Setting aside my concerns about what a Justice Kavanaugh would mean for the rights of Americans, I cannot support a nominee for a lifetime seat to our highest court who cast aside truth in pursuit of raw ambition. Unimpeachable integrity must never be optional.

Over 5.6 Million Reads Adam Gonzalez at September 15, 2018 No comments: Links to this post