Two Whistle Words The Republicans Use to Scare Voters Away: Don’t Work} Homosexual and Socialism 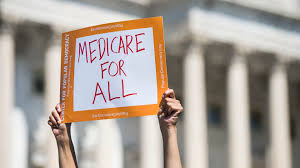 Generation Z has a more positive view of the word "socialism" than previous generations, and — along with millennials — are more likely to embrace socialistic policies and principles than past generations, according to a new Harris Poll given exclusively to Axios.

Why it matters: The word "socialism" does not carry the same stigma it did in the past, now that it has been resurrected by celebrity politicians like Bernie Sanders and Alexandria Ocasio-Cortez. Young people's political views often change as they grow older, but their support for socialistic policies is a sign that the old rules of politics are changing fast.

Gen Z and millennials are projected to make up 37% of the electorate in 2020, and what they're looking for in a presidential candidate is shifting.

Over 5Million Reads Adam Gonzalez at March 17, 2019 No comments: Links to this post


By Tara Golshan
President Donald Trump is making a big push to expand work requirements in the nation’s social safety net, calling on his administration to propose tougher rules for America’s most vulnerable population to benefit from welfare programs.
Trump signed the Reducing Poverty in America by Promoting Opportunity and Economic Mobility executive order privately Tuesday, ordering secretaries across the government to review their welfare programs — from food stamps to Medicaid to housing programs — and propose new regulations, like work requirements.
The executive order calls on federal agencies to enforce current work requirements, propose additional, stronger requirements, and find savings (in other words, make cuts), and to give states more flexibility to run welfare programs.
“Since its inception, the welfare system has grown into a large bureaucracy that might be susceptible to measuring success by how many people are enrolled in a program rather than by how many have moved from poverty into financial independence,” the executive order reads.
The order calls on the Treasury, Agriculture, Commerce, Labor, Health and Human Services, Housing and Urban Development, Transportation, and Education departments to use the next 90 days to submit a report with their recommended policies to the White House.
The order doesn’t yet set any new policy, but it does reflect a hardline conservative view of the nation’s entitlement system — one that welfare experts say relies on faulty arguments and could cut off the nation’s neediest from lifesaving safety net programs.

The text of the executive order calls for a review of all welfare programs across agencies, something a senior White House official calls a push for a “coordinated” effort across federal and state agencies to reform the welfare system. But the result could be recommendations that propose drastic changes to programs like Medicaid, which offers health care for low-income individuals; food stamps; and Temporary Assistance for Needy Families (TANF), which gives poor families financial aid. The administration is also looking at housing programs, the White House official said.
Agencies are ordered to follow nine “Principles of Economic Mobility” to guide their proposed policy changes, including adding work requirements, giving states more flexibility — usually in the form of block grants — consolidating duplicative programs, and encouraging involvement from the private sector.
Put together, this order outlines much of the conservative welfare agenda, which has long promoted cutting welfare programs, either through pushing people off the federal rolls with harsher work requirements or block-granting funding to the states, giving them more purview over how to allocate money to welfare programs.
Trump has long called for tougher requirements to receive welfare benefits but hasn’t been specific on what policies he would like to see and which programs he’d like to target. His order is now calling on his administration to iron out the specifics.

White House adviser Andrew Bremberg told reporters that Trump’s executive order is meant to “highlight the success” of President Bill Clinton’s 1996 reforms to TANF. Those reforms added work requirements to TANF and fundamentally adjusted how the program’s funding worked, giving money to states in a lump sum and allowing the states to allocate their funding as they saw fit. In the early years, Clinton’s TANF reforms were extremely popular.

But over the past decade, poverty experts have reached a consensus that TANF no longer works, because states stopped using the money for the safety net programs. “TANF is not an effective program,” James Ziliak, director of the University of Kentucky’s Center for Poverty Research, told Vox last year — it’s served fewer and fewer families over the years.
This is a common misunderstanding of the longstanding effects of the 1996 welfare reform effort — and one that conservatives continue to push when proposing cuts to entitlement programs.
A misunderstanding of ’90s welfare reform is not the only faulty evidence the White House used when promoting the order signed on Tuesday. In a fact sheet sent to reporters, the White House cites the effectiveness of food stamp work requirements implemented in Kansas and Maine — the case studies often used to promote work requirements.
“Studies conducted after reforms in Maine and Kansas show that individuals who left welfare and went back to work saw their incomes increase, more than doubling on average; this increase more than offset the welfare benefits they lost. Welfare enrollment also dropped by 75 to 90 percent,” the White House said.
But a decrease in welfare enrollment isn’t an indication of much other than the federal government spending less money.
And a Center on Budget and Policy Priorities audit of the reports on Maine and Kansasfound that when actually taking into account the loss of SNAP benefits after being cut off, the difference in income before and after reinstating the work requirements is much less stark than what the White House cited. The total resources (including earnings and SNAP benefits) available to SNAP participants who were cut off was 3 percent lower a year after the cutoff.
In other words, there is no clear indication that reimposing the three-month time limit reduced poverty levels. While CBPP did find some increase in wages, the slight differences aren’t necessarily because of the policy changes.
The CBPP notes that the economy was getting better in 2014 — the same time those work requirements were put into place.

Republicans have long demanded reforms to the American welfare system, decrying bloated federal handout programs that they claim disincentives Americans from working. They argue that additional work requirements would encourage more people to get out of the cycle of poverty.
While poverty and welfare experts will point out there’s always room for reforms, the statistics paint a very different picture of how some of these conservative reforms actually play out.
For example, food stamp recipients are mostly children and elderly or disabled people. The number of able-bodied adults without dependents is slim, and not nearly enough to make up the numbers in savings that the projections for this proposal indicate. Waste and fraud in the program are also relatively inconsequential.
There is strong evidence that SNAP reduces food insecurity and improves health outcomes, especially among children, who make up the majority of SNAP beneficiaries. But the evidence from randomized studies of work requirements shows that they have little or no effect on poverty — and leave many people who aren’t induced to work without a safety net.
“It’s a false narrative,” Ziliak told me last year of a conservative proposal to cut food stamps. “The evidence shows that the program actually works. Not all programs work. But SNAP actually is one of those that does what it is supposed to be doing.”
As is, SNAP and TANF, which provide services like child care or income assistance, already have work requirements for able-bodied adults without dependents. Those requirements are often waived when the economy is doing poorly and reinstated when the job market is more stable, which is what Maine and Kansas did.
Already conservative lawmakers — like Rep. Jim Jordan (R-OH) have proposed harsher requirements at the federal level, like tightening the window individuals have to find a job from three months to one month, increasing the number of hours they have to work per month from 80 hours to 100, and extending the requirements to able-bodied adults with dependents.
It’s not clear what the Trump administration plans to propose, but they said reforms to SNAP and Medicaid are front and center.
Reported yesterday on VOX

It is adamfoxie's 10th🦊Anniversay. 10 years witnessing the world and bringing you a pieace whcih is ussually not getting its due coverage. 4.9 Million Reads
Over 5Million Reads Adam Gonzalez at April 12, 2018 No comments: Links to this post