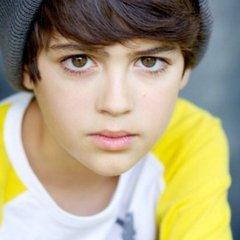 By MARIA PASQUINI
When Joshua Rush found out he’d be playing Disney Channel’s first openly gay character, he spent a lot of time preparing for the historic moment.
“I feel the pressure, and I also don’t,” Rush, who plays Cyrus Goodman on Disney’s Andi Mack, tells PEOPLE Now. “I think the most important thing for me when I got this part was to do it right.”
“I knew that I wanted to do it justice, because I knew that people were gonna end up seeing this and being like, ‘Wow that’s me, I identify with that [and] I can be who I am now,’ but I also wanted to make sure that it’s not all-encompassing. Like that’s not all of Cyrus’ personality,” the 16-year-old adds.
While preparing for the big day, Rush says he and his costar Sofia Wylie ran through the scene multiple times the night before filming, “just brainstorming, how are we doing to do this.”
“We put the work in, and I think it shows,” he adds.
Rush had previously opened up to PEOPLE about the importance of representing gay teenagers onscreen.
“It’s important that everybody gets representation and that anybody having thoughts on who they are is able to see that represented on TV and to be shown that’s okay,” Rush explained. “I think [my character] Cyrus feels different, and I think in our teenage years we all feel different at different times, so it’s important to show anyone that Cyrus is comfortable with who he is and is happy with who he is.”
To ensure the story of Cyrus was told in an age-appropriate and respectful manner, the network consulted with child development experts and organizations, including Common Sense Media, GLAAD and PFLAG.
Craig Sjodiin/Disney Channel
“I think this storyline is definitely going to help a lot of my peers,” Rush says. “I was the first person that one of my good friends came out to, and I think that if I had someone like Buffy on TV, I think I would’ve done a better job and had been a better friend in that situation. I’m glad that I can be a part of this.”
He adds, “I hope that more shows will follow in Disney’s footsteps with Cyrus’ storyline. Really, I look forward to the day that it’s not an unusual occurrence. I hope everyone can one day see that our differences are beautiful and that love is love.”
PEOPLE
Over 5.6 Million Reads Adam Gonzalez at February 24, 2018 No comments: Links to this post