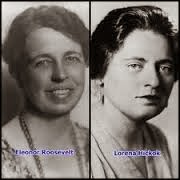 Ken Burns’ latest formidable television documentary series, “The Roosevelts: An Intimate History,” premiering this week on PBS is entertaining and educational, at least so far for me. Being only three two-hour episodes in, I am taking the word of friends who’ve seen it all who say it stays good to the end.
One friend pointed out a major shortcoming, however. That is the failure of the series to portray the lesbian side of the first lady, Eleanor Roosevelt. You see, we’re not there yet when despite this era’s progress in comfort with and acceptance of homosexual love, it’s still seen as something for whispers and innuendos (there are those in the documentary) unless it can’t be avoided.
It’s a terrible disservice. Not only do gay and lesbian citizens deserve to know that one of the nation’s most important political figures was one of them, as such incredible role model for them, but so does everybody, to better appreciate what gays and lesbians bring to society.

Eleanor Roosevelt plays a major role in my new book, Extraordinary Hearts: Reclaiming Gay Sensibility’s Central Role in the Progress of Civilization (New York, Lethe Press, 2013), a compilation of 100 essays published weekly in the Washington, D.C. gay and lesbian magazine, Metro Weekly, from 2010 to 2012. I particularly focused in on her in Chapter 77, on both her and her husband, in fact. Picking up about half way through the chapter, I wrote the following:
“In the last century, two powerful manifestations – at least one of a non-erotic variety – can be credited with no less than saving America, defeating tyrannies on two global war fronts and preventing the impact of two World Wars and a Depression from resulting in tyranny at home.
“Franklin D. Roosevelt (1882-1945) and Eleanor Roosevelt (1884-1962), in tandem the most powerful, unitary influence for good during the entire 20th century, each were beneficiaries of highly influential same-sex bonding experiences.
“In H.W. Brand’s Traitor to His Class: the Privileged Life and Radical Presidency of Franklin Delano Roosevelt (2008), writings by Secretary of the Navy Josephus Daniels (1862-1948) state that when Daniels first met Roosevelt in 1912 ‘I thought he was as handsome a figure of an attractive young man as I had ever seen…Franklin and I became friends – a case of love at first sight – for when men are attracted to each other there is born a feeling that Mexicans call ‘sympatica,’ a word that has no counterpart in English.
“Daniels adopted Roosevelt as his Assistant Secretary of the Navy and became his first political sponsor. There is no doubt that Daniels’ self-declared intense emotional attachment with FDR played an instrumental role in the launch of FDR’s career toward the presidency. Daniels stuck with Roosevelt all the way, while also continuing a successful newspaper publishing career in North Carolina and growing up a large family.”
“In Eleanor Roosevelt’s case, the critical same-sex relationship was with Lorena Hickok (1893-1968) during FDR’s 1932 campaign for president and in the touchy years of his first term, including a period when Wall Street sought a fascist military coup against them (Sally Denton, The Plots Against the President: FDR, a Nation in Crisis and the Rise of the American Right, 2012).
“The intense bond between Eleanor and Lorena, a known lesbian, propelled Eleanor to overcome her shyness and step forward as a revolutionary First Lady, as documented by Maurine H. Beasley in her Eleanor Roosevelt: Transformative First Lady (2010). Their relationship helped a destitute Lorena financially by co-authoring a book with her, Ladies of Courage (1954).
“Living on after FDR’s death in 1945, Eleanor spearheaded adoption at the United Nations in 1948 itsUniversal Declaration of Human Rights, perhaps the most important political document in history.
“Despite abstentions from the Soviet Bloc countries at the time, it passed all the nations of the world unanimously.”
Although these elements are missing in Ken Burns’ documentary this week, enough images of the real Eleanor Roosevelt, images showing her rejecting traditional roles for women in her era, open the discourse for a much more thorough and appreciative assessment of her singular role in the world.
fcnp.com

Over 5Million Reads Adam Gonzalez at September 24, 2014 No comments: Links to this post