This will probably bring dreams and thought to anyone gay that reads it and see how this people did it.  Could we Have done it here in New York? No because we have same sex marriage in the whole state! 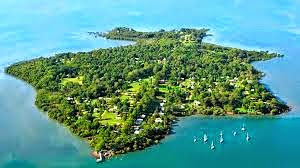 Marriage equality discrimination led a group of Australian activists to set their rainbow flag on Cato Island. This ‘homeland’ even has a Gloria Gaynor anthem.
When Australia refused to allow its gay citizens equal rights to marriage, a group of activists deserted the country, sailed 200 nautical miles to an island off the Great Barrier Reef and hoisted a rainbow flag in the highest spot they could find.
They declared it the Gay and Lesbian Kingdom of the Coral Sea Islands.
The impetus came in 2004 during the Brisbane Gay Pride festival, when a collective of friends decided that without being granted legal marriage rights they would leave and start their own more inclusive country.
They set sail, docking at Cato Island, and transforming it into a “homeland for the gay and lesbian peoples of the world.” Soon after, they declared war on Australia for not recognizing gay marriages performed outside the country.
Ten years later, the quasi-nation has a Gloria Gaynor national anthem and a website featuring a collage of rainbow-colored beachwear.
The Declaration of Independence, which also includes a chunk from the United State’s version, reads: “In countries where we have lived for centuries, we are still cried down as strangers… In the world as it is now and for an indefinite period… I think we shall not be left in peace.”
The capital, Heaven, appears to just be a pristine beach with a sign saying, “Welcome to Heaven.” It offers snorkeling and camping, but as there is no actual population or infrastructure on the island, visitors must charter flights and bring their own supplies.
The website notes that gay and lesbian visitors will be thrilled to learn that much of the sea life is transsexual.
The kingdom’s sole industry is stamp collecting, which is described on the website as an activity to “satisfy both the most avid enthusiast and the casual or thematic collector.” And the island offers a shiny red mailbox on the capital’s beach with which to use these stamps.

“Oppressed people of overseas territories have a right to self government and self determination.”

The Gay Kingdom’s all-mighty ruler is Dale Parker Anderson, who claims to be a direct descendant of King Edward II of England.
When his appointment was announced, he told the Sydney Star Observer that he took the post just because “no one else would do it…It’s a bit hard to get there because there’s no harbor and you have to park the boat off the reef and wait for a wave.”
The kingdom lays claim to its island by invoking international law that states that overseas territories are allowed to secede and govern themselves. “Oppressed people of overseas territories have a right to self government and self determination,” the website quotes this law as dictating.

Likely what they are referring to is the right of self-determination, which was drafted to give colonial territories the right to shed their indentured status. According to the Princeton Encyclopedia of Self-Determination, this has never actually happened, but could, someday, “if a distinct group of people is systematically denied the right to participate in the government of the state or if individuals within such a group suffer systematic and gross violations of human rights that make their participation in that state impossible.”
Though it appears the kingdom may not be entirely open itself. “You don’t need a visa to visit, although you do need to be gay or lesbian,” Lonely Planet notes in the book Micronations.
According to a case study in Shima: The International Journal of Research into Island Cultures, Anderson had pulled back from his duties as emperor in early 2014, though the group’s Facebook page has showed intermittent activity since then, most recently railing against the homophobia of Sochi and, later, praising Google.
Despite slow progress in neighboring Australia, the Gay Kingdom seems to have lost its early vigor a decade after its founding.
But the issue hasn’t died down on the mainland. In 2013, Australia legalized marriage equality for just five days, until the High Court overturned the decision, invalidating all recent nuptials and leaving the lingering question of when there would no longer be a need for a separate kingdom.
Thedailybeast.com
by Nina Strochlic
Over 5.6 Million Reads Adam Gonzalez at April 18, 2015 No comments: Links to this post