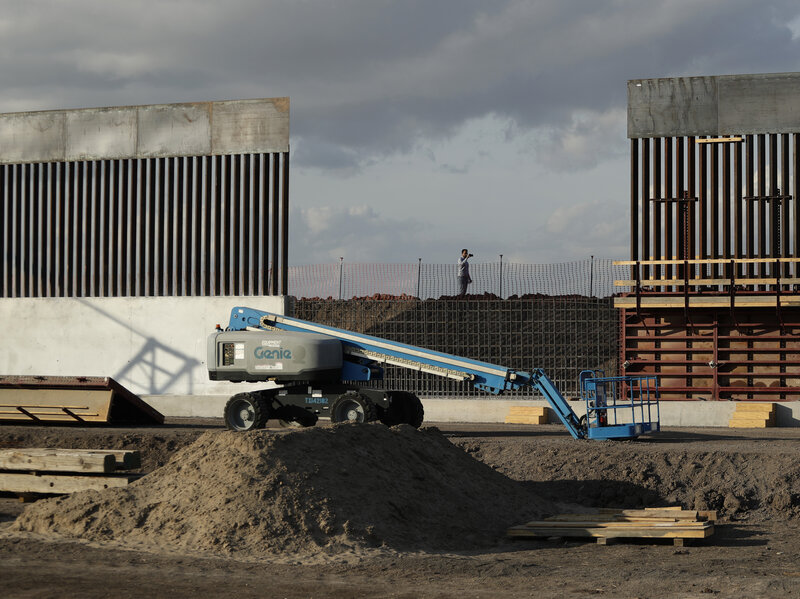 NPR /Richard Gonzalez
A  federal judge in Texas on Tuesday blocked the Trump administration from using $3.6 billion in funds allocated by Congress for military construction projects to help pay for a wall on the southern border.
U.S. District Judge David Briones of El Paso ruled that the administration's use of an emergency proclamation last February to divert those funds to the border wall is unlawful.
The ruling found that the administration was within the law in using an additional $2.5 billion intended for drug interdiction efforts for border wall construction.
"The President's emergency proclamation was a blatant attempt to grab power from Congress," said Kristy Parker, counsel for the nonpartisan organization Protect Democracy, which represented the plaintiffs, in a statement. "Today's order affirms that the President is not a king and that our courts are willing to check him when he oversteps his bounds."
The suit was brought by El Paso County and the Border Network for Human Rights. It argued that the administration overstepped its authority by "declaring a national emergency and violating laws of Congress limiting funds for barriers at the United States-Mexico border."
Over 5.6 Million Reads Adam Gonzalez at December 12, 2019 No comments: Links to this post

Email ThisBlogThis!Share to TwitterShare to FacebookShare to Pinterest
Labels: Wall

As the country nears a government shutdown because several large adult men who get off on depriving migrants of their basic human rights can’t get what they want, one brave soul came forward to the Washington Post to admit that he now regrets his decision to vote for one of those men. No, this turncoat doesn’t so much care about the depriving migrants part so much as he’s worried about the impending destruction of his butterfly sanctuary, which will be basically destroyed by President Donald Trump’s border wall.
In an “as told to” opinion piece the Washington Post ran on Monday, Luciano Guerra, an outreach coordinator and educator for the National Butterfly Center in Mission, TX, lamented his decision to vote for Trump in 2016 because the president’s planned border wall would run straight through his butterfly sanctuary near the U.S.-Mexico border:

The first section, funded by Congress in 2018 for construction starting early next year, will cut right through our 100-acre refuge, sealing off 70 acres bordering the banks of the Rio Grande...On the south side of the barrier, flooding will worsen. On the north side, animals (including threatened species like the Texas tortoise and the Texas horned lizard) will be cut off from ranging beyond the wall for feeding and breeding. Flood lighting will disrupt the usual patterns of nocturnal species. We dread the destruction that will come when the bulldozers arrive, which could be as early as February. That loud, heavy machinery will cause irreparable damage to the habitat we’ve worked so hard to restore. Holy shit! That sounds awful! I can’t imagine working so diligently to create this center for wildlife and education only to have it mercilessly torn apart like an immigrant family at the border! But lest you start feeling too much sympathy swell, Guerra described himself as a lifelong Republican who voted for Trump, knowing full well that a border wall was on his list of Ways To Hurt Immigrants and Americans Alike. Alas! If he even had an inkling of an idea that the wildlife sanctuary, 240 species of butterflies and all, would be at jeopardy should Trump be elected president, why would he vote for him?

Ahh, yes, what a familiar tune (with a particularly mind-bending analogy):

People have asked me, “Didn’t you listen to Trump when he said that he would build a wall?” I didn’t take the idea seriously during the campaign. I knew he couldn’t get Mexico to pay it — that’d be like asking Hurricane Harvey to foot the bill for rebuilding Houston — and thought it was just talk: another candidate making big promises he couldn’t keep. I never thought it would actually happen.

Let Guerra be the absolute last person allowed to rationalize voting for Trump because they didn’t think he was going to do the bad things! Sorry, I don’t make the rules!
Guerra, for all his remorse, also doesn’t seem all that worried about the people most affected by Trump’s anti-immigrant rhetoric, writing, “I want our immigration laws to be enforced, and I don’t want open borders,” and not much else on the very real human costs of such a wall. But while Guerra is doing the same old song and dance many a regretful Republican have done before him, I’m still genuinely astonished at the amount of slack Guerra cuts Trump in voting for him, particularly because he acknowledges Trump’s smears are based on lies. He said in the Post:

...Mission is not a dangerous place. I’ve lived here all my life. Here at the National Butterfly Center, 6,000 schoolchildren visit each year. Girl Scouts come here when they camp overnight just a mile or so from the Rio Grande. When the president says there’s a crisis at the border that requires an action as drastic as building a massive concrete wall, he either knows that it’s not true or he’s living in an alternate reality.

According to the San Antonio Express-News, the National Butterfly Center sued the federal government “after contract workers appeared unannounced” on the property in 2017. Earlier this month, the Supreme Court refused to hear the case, allowing a U.S. District Court judge’s ruling in favor of the government to stand. As a result, the Trump administration gets to bypass more than two dozen federal laws, most of the environmental protections, and bulldozing could start as early as February.
The thing is, I feel very little remorse for Guerra because I deeply feel for the communities that Trump’s border wall will hurt the most. Guerra really doesn’t express concern over the fact that children are dying in federal custody because of Trump’s politics. Close the borders, sure thing, but destroy a butterfly habitat? You’ve gone too far, President Trump!
It’s highly unlikely that Guerra’s impassioned plea to keep the sanctuary intact will move the president, but he says he at least wants to be someone who Tried:

Still, I want to be able to tell my grandchildren and great-grandchildren that I fought against the wall. I worry that, if it goes up, their only experience of the Rio Grande Valley’s natural beauty will be through the photographs that I take today.
If Donald Trump runs for a second term, he will not get my vote.

Over 5.6 Million Reads Adam Gonzalez at December 20, 2018 No comments: Links to this post 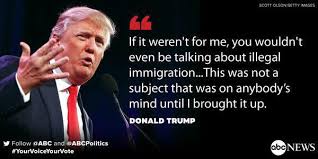 InsideGov | Graphiq
Over 5.6 Million Reads Adam Gonzalez at January 25, 2017 No comments: Links to this post

Why Has Wall Street Adopted The Gay Rights/ Marriage Franchise?

Finance firms can move fast when it benefits the bottom line. That’s why Wall Street, despite its rigid alpha-male reputation, has been remarkably progressive on the issue of gay rights. From the breadth of domestic partner benefits to Goldman Sachs (GS) Chief Executive Officer Lloyd Blankfein’s commercials in support of same-sex marriage, banks and brokerages have embraced this area of equality. Maybe that’s because of the industry’s war for talent, the spending power of gay clients, or Blankfein’s thesis that the market only cares about results.
Whatever the reason, the finance sector’s rapid adoption of gay-friendly practices presents an interesting challenge for Todd Sears. He founded Out on the Street, a lesbian, gay, bisexual, and transgender (LGBT) group that’s grown from six member companies to 15 over the past three years. “It’s an exciting time,” says Sears, a former investment banker and ex-Merrill Lynch (BAC)financial adviser. “We’re at a transformative moment.”
The challenge now is to build the business case. With Rhode Island set to become the 10th state to legalize gay marriage, thanks to Republicans who are shifting their views to echo public sentiment, the danger is that many will assume the battle is won and move on. In any case, the moral argument for diversity doesn’t play to the same fist-pumping instincts in financiers as figuring out new ways to make money.
So “return on equality” became the theme of the group’s third annual summit today at Goldman Sachs headquarters in downtown Manhattan. The invitation-only event, which brought together some 300 director-level executives to talk about LGBT issues and opportunities, drew an all-star lineup of supporters. Along with Blankfein, speakers included HSBC Holdings’ (HBC) U.S. chief Irene Dorner, Ernst & Young CEO Jim Turley, Vestart Capital Partners founder Dan O’Connell, KPMG CEO John Veihmeyer, and Bob McKillip of Royal Bank of Scotland (RBS). Their focus: how greater acceptance for gay employees is now extending to external initiatives and recruitment, emerging leaders, and the business cost of policies that impede the immigration of LBGT families.
Among other things, Sears is looking to extend the Out on the Street franchise to a broader swath of the industry. “I’d like us to do more with mutual fund groups and asset managers,” he says, noting that he’s talked to asset manager BlackRock (BLK). Sears is also looking to move into other industries, like law, as well as other regions such as Hong Kong.
To be sure, a number of challenges loom large, not least of which is the U.S. Supreme Court decision expected in June that could promote sweeping marriage equality or set it back. While France recently became the largest of 14 countries worldwide to mandate equal marriage rights, sexual orientation remains a touchy and politically charged topic. Take the Boy Scouts of America, for example. Faced with blistering criticism for its ban on gay members, the organization will soon have its members vote on a compromise proposal that would extend membership to openly gay youth but not gay adults. That has invoked yet more criticism and put board members like E&Y’s Turley, a vocal advocate of gay rights, in a bind.
When asked on April 29 about the issue, and the response it evoked, Turley said he saw the proposal as “a step in an ongoing process and not the end of the debate.”
Brady is a senior editor for Bloomberg Businessweek in New York.
businessweek.com
Over 5.6 Million Reads Adam Gonzalez at April 29, 2013 No comments: Links to this post