Trump’s W.H. Tells OGE Ethics Does Not Apply to Them 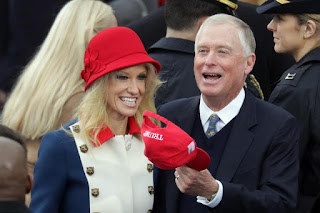 The White House asserted this week that broad swaths of federal ethics regulations do not apply to people who work in the Executive Office of the President. Ethics experts say this sets the Trump White House apart from past administrations.

The administration's assertion was made in a letter that White House Deputy Counsel Stefan Passantino wrote regarding the controversy over White House Counselor Kellyanne Conway's recent ethical issues.

Passantino's letter said that "many regulations promulgated by the Office of Government Ethics ("OGE") do not apply to employees of the Executive Office of the President."

This all began after Conway's endorsement of Ivanka Trump's clothing line in a February Fox & Friends interview. In response, OGE Director Walter Shaub Jr. had advised that there was "strong reason to believe" that "disciplinary action is warranted" against Conway for "misuse of position" in promoting a product.

In his letter this week, Passantino concluded that Conway had "acted inadvertently" and promoted Trump's products "without nefarious motive or intent to benefit personally."

Near the start of his letter, Passantino described the White House's view of ethics:
"We note initially that although many regulations promulgated by the Office of Government Ethics ("OGE") do not apply to employees of the Executive Office of the President, the Office of the White House Counsel has instructed all such employees to abide by 3 CFR 100.1 ..."
Richard Painter, who served as the George W. Bush administration's chief ethics lawyer from 2005 to 2007, said that expansive assertion breaks with the past.

"Every White House has instructed employees that these OGE rules are binding rules for White House and other EOP staff," he wrote in an email to NPR. "The only exception is the President and in some cases the Vice President."

Because of the broad, nonspecific nature of what Passantino wrote, Painter advised that the ethics office should work to get more answers.

"OGE should write back and ask the White House Counsel which OGE rules it believes do not apply to EOP staff," Painter said. "OGE is entitled to know that."

When asked about the OGE's response, a spokesman from that office told NPR, "OGE has received the letter, and we are evaluating it."

NPR has reached out to the White House about which rules officials believe do and don't apply but has not yet received a response.

What does “agency” mean?

While Trump Touts Stock Market, Many Americans Are Left Out Of The Conversation
Here's what may be at issue in the letter Passantino wrote. He said that White House employees must abide by a particular bit of code (3 CFR 100.1) that comprises a massive amount of regulations. But there's a catch within those regulations, Painter said:

If the definition of agency is in question, that means major rules also could be. Painter pointed to the section intended to ensure "impartiality" — keeping federal employees from engaging in work that might directly benefit themselves or their family members, for instance — as one example. Another could be the rules regarding when employees may or may not accept gifts from outside sources.

Quibbling over what exactly constitutes an agency has happened before. In 2005, Dick Cheney's office made this kind of argument to justify the way it avoided reporting travel expenses.

"The Office of the Vice President is not an 'agency of the executive branch,' and hence the reporting requirement does not apply," wrote Cheney's general counsel, David Addington, as reported in the Washington Post in 2005.

Painter, however, said that the Cheney instance isn't nearly as consequential as the current debate.

"VP Cheney's office in some respects came a little close to the Trump approach on ethics issues," he wrote. "But the Cheney approach, even if uniquely distinct from that of every other recent Vice President, is a model of compliance compared with the Trump White House."

The agency argument is similar to one that the DOJ made when approving the appointment of Trump's son-in-law, Jared Kushner, as an adviser: that the White House Office (a subset of the EOP that itself includes a variety of smaller offices, like the Office of the Chief of Staff and the National Economic Council) is not an agency. That question was similarly at issue in a case pertaining to Hillary Clinton's position on a White House task force during her husband's presidency.

One Obama-era ethics adviser had a blunt response to this kind of debate when it comes to ethics laws.

"This is nonsense. There are debates about whether for other purposes the [White House] is an agency," wrote Norman Eisen, who led White House ethics efforts from 2009 through 2011, in an email to NPR. "Never before for ethics purposes."

"This part of the letter is another salvo in trump's war on ethics. Terrible," he later added.

And focusing on what agency means very easily could be a losing argument, Painter added.

“I am not sure this argument is right so I never would have tried it and would not recommend that the White House do so," he said.

DANIELLE KURTZLEBEN
NPR.org
Over 5Million Reads Adam Gonzalez at March 03, 2017 No comments: Links to this post

I know what you are thinking but still one should know when one is driving without brakes on Ethics.

The Trump administration faced continued criticism over possible ethics violations Thursday after a White House official promoted Ivanka Trump's clothing line in a television interview.
"Go buy Ivanka's stuff," Kellyanne Conway, counselor to President Trump, told Fox & Friends co-host Steve Doocy.
Ivanka Trump has a "wonderful line," Conway added. "I own some of it. I fully, I'm gonna just going to give a free commercial here. Go buy it today everybody. You can find it online."
Critics accused Conway of breaking federal ethics rules.
They included Public Citizen, a watchdog group that said it was going to file a formal complaint with the Office of Government Ethics.
The group's president, Robert Weissman, said Conway's remarks could not be misinterpreted as anything but a violation.
"Since she said it was an advertisement, that both eliminates any question about whether outsiders are unfairly reading into what's being said, and two, it makes clear that wasn't an inadvertent remark," Weissman said.
Weissman said Conway's remark was "yet more evidence" that Trump's earlier assertion that he'd separate his family's business interests from White House activities "was untrue."
Chris Lu, a former Obama White House aide and deputy labor secretary, tweeted a section of federal ethics regulations that he said Conway had broken.
The regulations say: "An employee shall not use his public office for his own private gain, for the endorsement of any product, service or enterprise, or for the private gain of friends, relatives."  Conway was responding to the outcry over Trump's criticism of Nordstrom for dropping his daughter's line. In a tweet on Wednesday, the president accused the retailer of treating his daughter "unfairly."  A spokesperson for Ivanka Trump has told NBC News that the brand had been selling well and that the move was in response to pressure from advocacy groups. Nordstrom has denied that.
Nordstrom stock ticked up a bit on Wednesday and Thursday.
Norm Eisen, former special counsel on ethics for Obama, told MSNBC that Trump's tweet was an abuse of power.
"He's putting the bully in the bully pulpit to attack this company on dubious factual assertions in order to promote his daughter," Eisen said.
Eisen pointed out that it remains unclear if the president has any financial stake in his daughter's business, and that there are a number of questions about his links to other parts of his family's empire.
"Literally everything he does has this miasma of conflict around it," Eisen said.
Eisen also said Trump's tweet gave Nordstrom grounds to sue.
"This is unfair business practices," he said. "There's a serious legal question. There are statutes across the country, including a very tough one in California."
But lawyer Maxwell Blecher, who specializes in unfair competition and antitrust cases, said Nordstrom did not have basis to sue under the California law.
"It's an expression of opinion," Blecher said. "It is not defamatory and it is not an unfair business act."

Then came Conway's Thursday morning plug on Fox.
Eisen returned to MSNBC to echo Lu's accusation of an ethical breach.
"It is not allowed for a government employee to use your public office for private gain," he said. "And by doing this ad, I have never seen anything like it. It's a violation of the rule. Pure and simple.”

JON SCHUPPE  and MARK MURRAY
nbcnews.com
Over 5Million Reads Adam Gonzalez at February 09, 2017 No comments: Links to this post